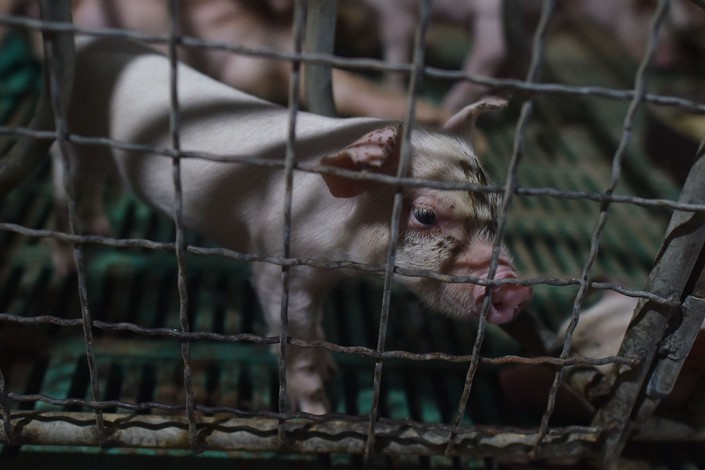 A piglet stands in a pen in a pig farm in Henan province's Yiyang county on Aug. 10. Photo: VCG

(Bloomberg) — Bans on pork products from China may be widened as part of emergency measures to stem the global spread of African swine fever.

The Food and Agriculture Organization, the United Nations agency spearheading an international effort to control the deadly pig virus, plans to release recommendations for governments after a crisis meeting in Bangkok this week. The Philippines last week ordered a temporary prohibition on pigs and pig-related products from China, Russia and four European countries to prevent African swine fever. More nations may follow, according to the FAO.

The contagious viral illness, which doesn’t harm humans, can be 100% fatal to pigs, causing them to die from hemorrhagic disease within days. Tens of thousands of hogs have been culled to control outbreaks in China, which accounts for more than half the planet’s pigs. The FAO is hosting government and pork industry officials from across Asia-Pacific at a three-day meeting that concludes Friday.

“By this Friday, we will come up with a framework for the region with priority action plans for each country,” said Wantanee Kalpravidh, regional manager of FAO’s Emergency Center for Transboundary Animal Diseases, in an interview Wednesday.

China’s most recent African swine fever outbreak occurred Sept. 1 in the township of Changqing in Northeast China’s Heilongjiang province, about 100 kilometers (62 miles) from the border with Russia, where the disease has been spreading for more than a decade.

Nine other outbreaks have been reported across northeastern and eastern China, spanning some 2,500 kilometers, since Aug. 1.

“There are serious concerns that African swine fever has been circulating in the pig population — whether backyard, commercial or wild boar — for some time,” Helen Roberts and Jonathan Smith, from the U.K.’s Animal and Plant Health Agency, wrote in an Aug. 31 report. The situation should serve as an opportunity to warn travelers not to bring pig meat products from outside the European Union (EU) into any EU member state, they said.

Travelers from Henan province arriving in South Korea voluntarily handed over pig products that were subsequently tested and found by authorities to harbor traces of the virus, the Korea Times reported on its website last month.

“We have a steep hill ahead of us,” said Juan Lubroth, FAO’s chief veterinary officer, in an interview. “We have only seen the beginning. We have not seen the end of it.”

Researchers believe the virus may have been introduced to China through contaminated food that was fed to pigs, and, therefore, could spread to other countries the same way.

“It’s extremely serious because of the importance of pork in people’s diet and culture, not only in China, but in this region as a whole, whether it’s the Korean peninsula or Vietnam or other countries,” Lubroth said. “It will affect trade, it will affect market prices.”

Although China is a major pork-producer, the majority of its production is consumed domestically. Many countries, including Australia, ban pork and pork-containing products from China because of the risk of introduction of another livestock scourge, foot-and-mouth disease.

Small quantities of pork-containing products may be shipped internationally and possibly illegally, in food carried across borders, representing a risk to other countries, FAO’s Wantanee said.