By Mo Yelin and Hu Diyuan 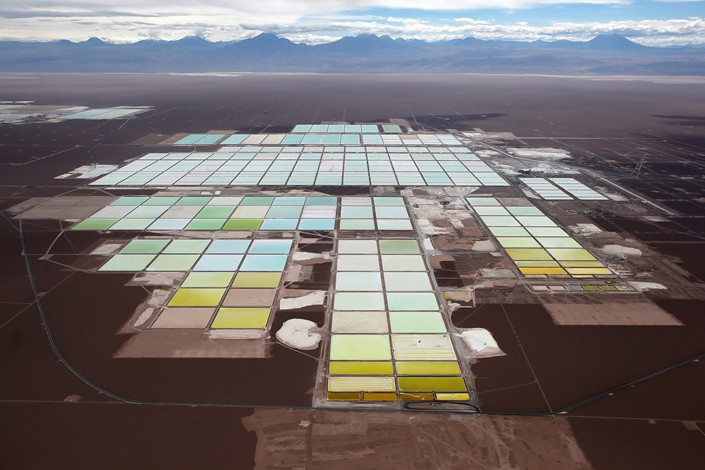 Brine pools and processing areas of the SQM lithium mine in Chile’s Atacama desert is seen in January 2013. Photo: VCG

Chengdu-based Tianqi announced the $4.1 billion deal in May, but it has been delayed pending an investigation by antitrust regulator FNE in response to a complaint filed by the nation’s development agency, Corfo, which raised concerns about market distortion.

But on Monday, the Shenzhen-listed Tianqi said in a statement (link in Chinese) that it has reached a deal with FNE, in which it agreed to a series of measures to limit its influence on SQM, including having restricted access to the latter’s sensitive business information and forgoing voting rights for board members.

“This extrajudicial agreement … marks a milestone, because for the first time measures are established in relation to the acquisition of minority interests by a company with respect to a competitor,” said Chile’s National Economic Prosecutor Mario Ybar through a FNE statement late last week.

The deal would still be subject to an October ruling from the Competition Tribunal, an independent Chilean court, before it can be finally closed. Last month, Tianqi said it has filed an application for another listing in Hong Kong to raise funds, which it said will mainly be used to purchase the stake in SQM.

Tianqi’s interest in SQM comes as Chinese companies have rushed to secure supplies of lithium, the major component for rechargeable batteries in various industries, especially electric vehicles. The stake purchase is expected to give Tianqi greater access to the element and boost China’s presence in the electric-car-battery supply chain.

Though China has major lithium supplies, they are mostly in the form of lithium brine in remote salt flats, which poses technical challenges to large-scale exploitation compared with the more-accessible hard-rock form. This, along with environmental concerns, means that the country imports most of the lithium used in its electric-car industry.

Tianqi has also ramped up efforts to boost lithium production by sealing deals in other overseas destinations, including the most recent one at Western Australia state’s Greenbushes mine, the world’s largest hard-rock lithium mine.