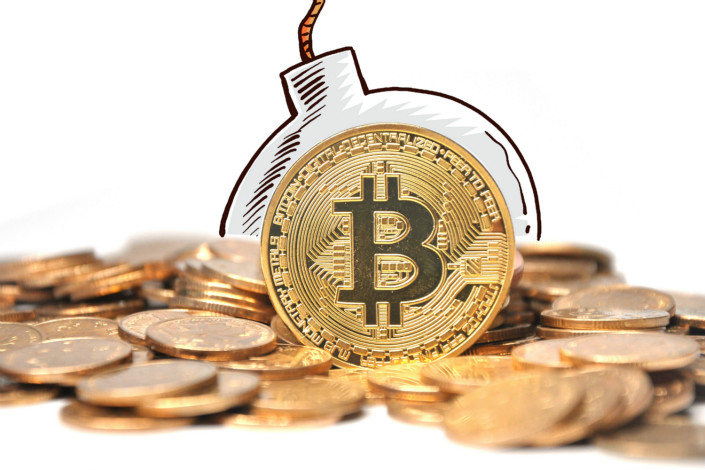 A Chinese cryptocurrency tycoon was detained by the police late Monday amid a dispute with investors who had huge losses on his bitcoin exchange platform.

Xu Mingxing, founder and CEO of OKCoin, one of the world’s largest bitcoin exchanges, was questioned by Shanghai police together with some of OKCoin’s investors.

Many investors complained that on Sept. 5, when bitcoin and other cryptocurrencies plunged by nearly 10%, OkCoin’s platform crashed, causing significant losses for many investors who trade cryptocurrency futures on the platform.

It’s not clear whether Xu was detained as a suspect or as a witness to assist in the investigation, said Xiao Sa, council member of the China Banking Law Society. Angry investors alleged that the OKCoin platform crash wasn’t an accident.

A spokesperson for OKCoin did not respond to Caixin's request for a comment.

Local Shanghai police said the investors’ complaints were related to OKCoin’s operations in its Beijing office, so the police will turn the case over to Beijing authorities after the investigation is concluded, according to an investor who also filed a complaint at the Shanghai police station.

The police told investors that Xu is being investigated in accordance with the law and that he wouldn’t be released if he is found to have been involved in any criminal activity.

On Monday night, about 10 investors chased Xu to a hotel in Shanghai where he stayed.

Xu was still inside the police station at noon Tuesday. At one point, a police officer told the investors outside the station that Xu was hungry but didn’t have money. Some investors contributed 10 yuan ($1.46) to buy lunch for Xu.

OKCoin, together with other China-based bitcoin trading platforms, have shut their mainland Chinese trading operations and moved offshore after Chinese regulators issued an edict in August 2017 forbidding fundraising through initial coin offerings.

An investor told Caixin that she intended to sell her positions, but the OKCoin app unexpectedly quit, causing her nearly 200,000 yuan of losses. She said some investors suspected that OKCoin intentionally allowed the system crash and placed short positions on behalf of the platform.

This was not the first time OKCoin received complaints from investors. On March 30, one investor threatened suicide at the company’s Hong Kong headquarters after “abnormal pricing” of its bitcoin futures contracts caused him substantial losses.