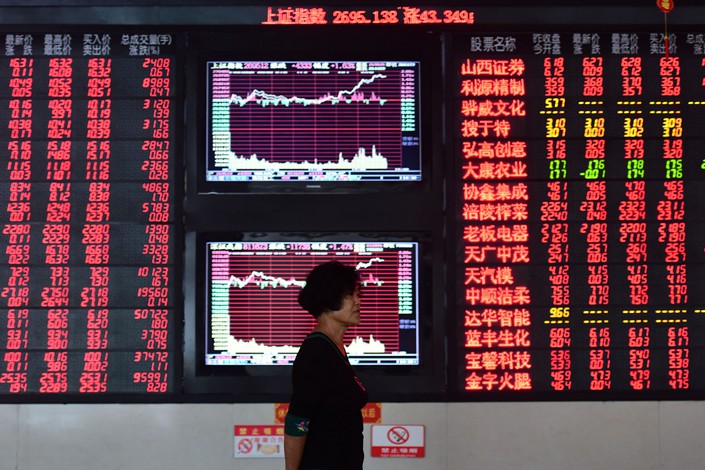 *China stocks saw their biggest gain in week Tuesday, rebounding from four-year lows despite concerns over new tariffs from the Trump administration

*Beijing did not immediately impose retaliatory tariffs, rather releasing a statement accusing the U.S. of bringing about “new uncertainty” to negotiations

(Beijing) — China stocks posted their largest gain in three weeks on Tuesday, shrugging off concerns about new U.S. tariffs as the mainland’s benchmark index rebounded from lows not seen in four years.

The administration of U.S. President Donald Trump on late Monday announced a 10% tariff on another $200 billion of Chinese imports, taking the trade war between the world’s two largest economies to a new level. The long-threatened new tariffs will take effect Sept. 24 and will be raised to 25% at the beginning of 2019, according to a statement published by the White House.

Unlike the previous day-long sell-off that followed the U.S.’ tariff threats, the benchmark Shanghai Composite Index quickly reversed course on Tuesday morning after opening down 0.28%. It ended up rising 1.82% on the day to close at 2,699.95.

The index took off around 2 p.m., pushed up by a rally in construction material, steelmaking and financial shares. China Railway Construction Corp. Ltd., one of the country’s largest state-owned integrated construction firms, jumped by the 10% daily limit to 10.77 yuan.

Investors seemed to have shrugged off the index’s unfortunate milestone on Monday, when it hit its lowest level since November 2014. The index has been in bear market territory since June over lingering fears about the trade war, an uptick in credit defaults and a broader economic slowdown.

The smaller Shenzhen Component Index, where most homegrown technology companies are listed, performed similarly, opening down 0.36% before finishing the day 1.67% higher. Hong Kong’s Hang Seng Index, which is more linked with global markets, followed the same path, opening down 0.3% and then gaining back 0.65% as of 3:15 pm. The market value of the gauge dropped below the key level of HK$3 trillion ($382 billion) on Tuesday as mainland pessimism migrated to offshore markets.

Unlike the last time the U.S. pulled the trigger on tariffs, the Chinese government and the Ministry of Finance did not immediately impose retaliatory tariffs of their own. Instead, they remained silent until the afternoon, when they released a statement accusing the U.S. of bringing about “new uncertainty” to the negotiations. “[China] hopes the United States will realize the adverse consequences that could come from this kind of action and take convincing measures to correct it in a timely manner,” the statement said.

The new tariffs raised doubts about whether a fifth round of trade talks between the world’s two largest economies would take place any time soon. There had been reports that Liu He, the top economic adviser to President Xi Jinping, and Wang Qishan, the country’s vice president, would lead the Chinese delegation.

Despite the stock market gain, analyst and traders expects that investor sentiment about mainland shares will remain fragile, as hopes are fading the two sides will reach an agreement in the near future.

The pessimism about the market has led some participants to retreat from the stock market. On Friday, for instance, the asset management arm of Ping An Group, China’s second largest insurer by premium income, dismissed a 30-man team that focused on managing clients’ mainland stock investments.

The tariffs could also hurt Chinese companies, such as those in commodity-related industries. Component manufacturing for electronics, consumer appliances, furniture and automotive parts would be the most heavily exposed to the tariffs, according to Lillian Li, a vice president at ratings agency Moody’s Investors Service.

When the spot yuan market opened on Tuesday, the currency initially weakened to 6.8760 per dollar. However, it later strengthened, trading around 6.86 per dollar as of 3:20 p.m. That’s still 0.13% weaker than the previous session’s close.

Liu Li-Gang, chief China economist at Citibank (China) Co. Ltd., warned clients about downside pressure on the yuan. “The risk and the sluggish domestic demand may exert depreciation pressure on the RMB, which may partly offset the tariff impact,” Liu said in a note on Tuesday.