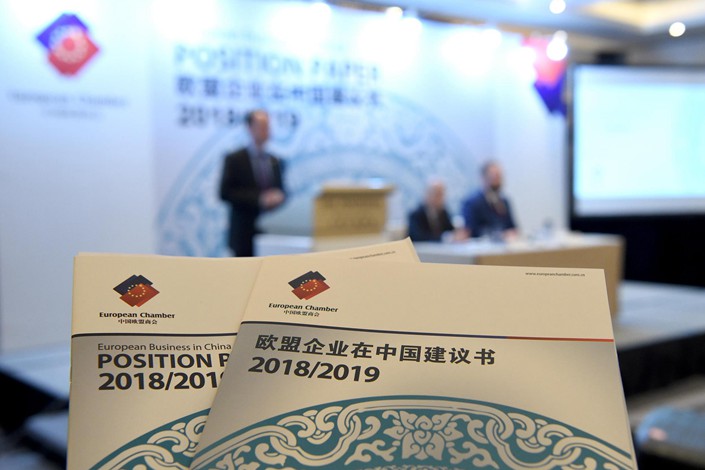 A view of the press conference at which the European Union Chamber of Commerce released its report on EU companies in China on Sept. 18. Photo: VCG

Failure of China’s economic reform to keep pace with the country’s rapidly maturing economy has created a “reform deficit,” leading to growing tensions between the country and its main trading partners, a leading European business group said on Tuesday.

The European Union Chamber of Commerce in China made the assessment in its latest position paper for 2018/2019, just hours after U.S. President Donald Trump escalated his ongoing trade war with Beijing by announcing the roll-out of a new round of protective tariffs aimed at $200 billion worth of Chinese imports.

The EU chamber’s latest position paper detailed many of the usual grievances voiced by foreign companies in China, including forced intellectual property transfers, excessive bureaucracy, unclear regulations and unpredictable enforcement of policies. The chamber also put the deficiencies in a broader context, noting the increasingly lagging state of such practices behind the nation’s more advanced economic development has created the “reform deficit.”

It noted that such a deficit has led to the kinds of complaints that many of its members have voiced for years. That deficit is also responsible for current tensions with the U.S. that threaten to develop into a full-scale trade war, which is already starting to disrupt global supply chains.

“While the escalation of tariffs by the United States represents a sharp and disconcerting response to the shortcomings of China’s reform agenda, it is based on concerns that are common with other economic powers, including the EU,” the chamber’s President Mats Harborn said in a preface to the latest report. “Remedying this situation by solving the challenges raised in this report should be pursued, because it is good for China and good for the world.”

The chamber’s report came less than a week after it and its counterpart representing U.S. businesses in China released results of separate surveys about the effects on their members of the ongoing trade war between Washington and Beijing. The survey by American Chambers in Beijing and Shanghai found that two-thirds of their members were feeling a pinch from the U.S.-China trade war, with many saying things would worsen if the U.S. levied more tariffs. The EU Chamber’s survey found that around half of its members viewed the U.S.-China trade tensions negatively.

The EU’s latest position paper asked the question of whether foreign companies operating in China compete on a level playing field with local players, and said “the answer is a clear ‘no.’”

“Some of the reasons for this are obvious and immediate: market access barriers, unequal access to subsidies, a dearth of licenses for international firms, differentiated treatment and sectors crowded out by monopolistic state-owned enterprises regularly dominate headlines,” the report said.

But it noted that other less obvious business-unfriendly factors, which China has previously promised to tackle, include lengthy administrative procedures, nontransparent procurement systems, unpredictable enforcement of regulations and issues arising from poor inter-governmental coordination.

One of the most commonly cited among 14 key concerns in the EU’s latest paper was competition from big state-owned enterprises, which often get special treatment from both central and local governments that are major stakeholders. Another was unclear regulations and unpredictable enforcement, which were also cited as concerns by all the major industry groups polled.

“Removing these hurdles is especially important this year, during which China celebrates 40 years of its Open-door Policy,” the chamber said. “Internal pressure is quickly building, with Chinese consumers demanding access to more, better and safer goods and services. External pressure is growing as well. China has already become a major global trading and investment force and the worldwide effects of a China that does not always follow globally-established norms are creating tension.”