Another Day, Another Wild Trading Debut for a China Tech Firm 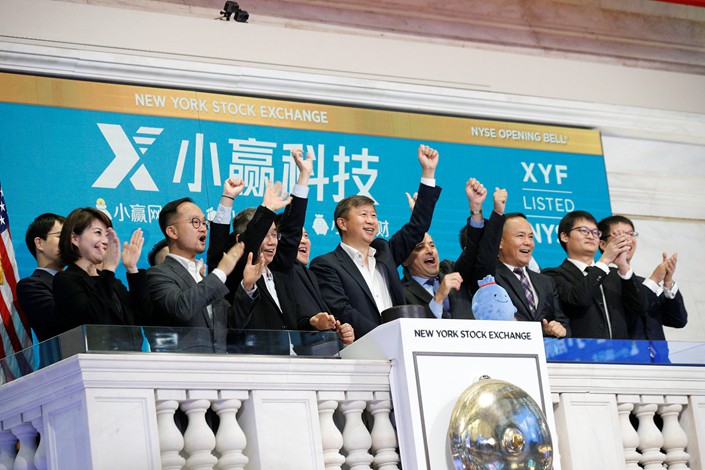 An investor frenzy met Chinese peer-to-peer (P2P) lender X Financial on its first day of trading in New York on Wednesday, with its American depositary shares jumping by 26% to close at $11.97.

In a raucous first day of trading, during which its stock price nearly doubled at one point, the Shenzhen-based X Financial became the latest Chinese tech company to have a wild debut on the U.S. market.

X Financial, which boasts that it is the biggest P2P lender in southern China, raised $104.5 million, pricing its initial public offering (IPO) at $9.50 per share — the lower end of the $9-to-$11 price range put forth in the company’s prospectus.

The company had initially planned to raise $250 million, but later lowered its fundraising target. It followed in the footsteps of Qutoutiao Inc., the developer of a popular news aggregation app, and electric-vehicle maker Nio Inc., both of whose shares also went through wild swings on their first days of trading.

Founded in 2014, X Financial makes most of its money by facilitating peer-to-peer loans, offering small unsecured loans, and selling wealth management products. As of the end of June, X Financial had facilitated 19.9 billion yuan ($2.90 billion) of outstanding loans, earning a net profit of 443 million yuan.

However, the company’s promising profits have been overshadowed by the central government’s regulatory campaign to exert more control over the online-lending industry, which includes P2P lending and microloans.

An increasing number of P2P platforms on the Chinese mainland have closed as they ran into liquidity problems under a national financial deleveraging campaign. Further, it appears that the government’s recent financial easing measures will not apply to the troubled P2P lending industry in the near term.

Under the campaign, thorough onsite checks on P2P lenders will be carried out nationwide by the end of this year, and all qualified platforms will have to be registered with local financial authorities by no later than mid-2019, according to previous regulatory notices.

Less than 3% of online consumer finance companies in China were offering such insurance protection as of Dec. 31, according to a report by consultancy Oliver Wyman.

Still, X Financial’s business faces several risks, including a rising nonperforming-loan ratio, a shrinking customer base in the first half, and an ongoing lawsuit in the U.S. involving its founder and chairman, Tang Yue.

Zhang shrugged off concerns about the company’s client base, citing rebounding investor numbers in August and September. He also played down the impact that the lawsuit, which is between Tang and another company, might have on X Financial.

On the fundraising side, X Financial plans to devote the majority of the IPO’s proceeds to salaries and upgrading its technology, Zhang said, without elaborating.