JD.com Steps Up Challenge to Alibaba in Bricks-and-Mortar Retailing 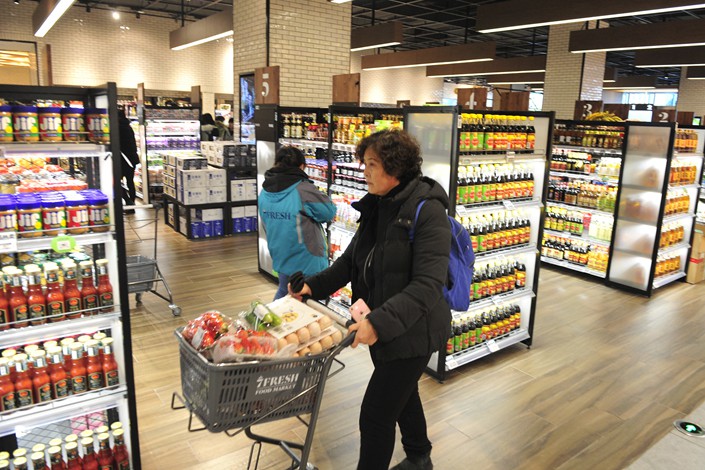 China’s second-biggest online retailer, JD.com Inc. plans to open 1,000 supermarkets in the next three to five years, as it races against archrival Alibaba to establish a presence in brick-and-mortar retail.

The 7Fresh supermarket brand now has just two branches — both launched in Beijing early this year — but will expand to many other cities, including Shanghai, Shenzhen and Chengdu, the company announced Wednesday. To achieve that goal, the company said it has signed agreements with 16 Chinese property developers, including real estate giant China Vanke Co. Ltd.

7Fresh is part of JD.com’s broader strategy to expand offline, which also includes thousands of convenience and home-appliance stores it has opened. In 7Fresh branches, customers can browse products and have groceries delivered to their homes within 30 minutes after placing an order through a mobile app.

JD.com has been playing catch-up with its rival Alibaba Group Holding Ltd., a pioneer of the “new retail” concept, which seeks to blend online and physical retail. 7Fresh has been seen as a “copy” of Alibaba’s Hema chain, which China’s largest e-commerce company said had 64 stores throughout the country by the end of July.

Early this week, Alibaba reported Hema earning results for the first time since its rollout three years ago. The average daily sales for a Hema store that has been open for at least 1½ years was 800,000 yuan ($116,700), and 60% of transactions were completed online, according to Hema CEO Hou Yi.

Similarly, in November, Alibaba said it had spent nearly $3 billion to purchase a third of Sun Art Retail Group Ltd., one of China’s leading hypermarket chains with 446 stores in 224 Chinese cities.