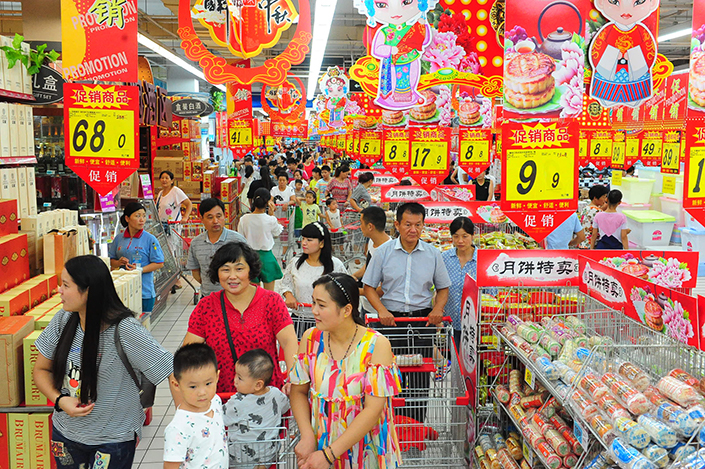 Alibaba will acquire its stake in Sun Art, which operates the RT-Mart and Auchan hypermarket chains in China, for HK$6.50 ($0.83) per share, well below the firm's last trading price of HK$8.60. Above, shoppers peruse an RT-Mart in Fuyang, Anhui province in August 2016. Photo: Visual China

E-commerce giant Alibaba Group Holding Ltd. said it will buy about a third of one of China’s leading hypermarket chains for nearly $3 billion, extending a string of moves into traditional retailing in pursuit of its vision of the shopping landscape of the future.

The company’s latest blockbuster deal, one of its largest acquisitions to date, will see it pay HK$22.4 billion ($2.86 billion) for 36.2% of the shares of Hong Kong-listed Sun Art Retail Group Ltd., Alibaba announced on Sunday. Alibaba is buying the shares from existing shareholder Ruentex Group.

At the same time, existing shareholder Auchan Retail SA will also boost its stake in Sun Art to about 36.2%. Ruentex’s share of Sun Art will fall to about 4.7% after the transaction.

Sun Art operates the RT-Mart and Auchan hypermarket chains in China, with a footprint of 446 stores in 224 cities, according to its website. It controls a 14.6% share among Chinese hypermarkets, whose players also include global rivals Walmart and Carrefour, according to Euromonitor.

Alibaba will acquire most of its Sun Art stake through a purchase by its Taobao unit, paying HK$6.50 per Sun Art share, or well below the grocery operator’s last trading price of HK$8.60 before the deal was announced, according to a stock exchange filing by Sun Art on Monday. That caused Sun Art’s shares to drop in Monday trade, with the stock down around 4% at HK$8.27 late in the trading day.

“In recent years, consumers’ demands have changed tremendously with the rapid growth of the mobile internet, and Sun Art is also endeavoring to move from offline to online,” said Ruentex Vice Chairman Peter Huang. “Ruentex is delighted to see the win-win collaboration between Sun Art and Alibaba with high synergies in online and offline that will meet the needs of consumers for a better life with better products and services and higher efficiency.”

Alibaba CEO Daniel Zhang added that the e-commerce giant sees the tie-up as part of its own efforts to “redefine traditional retail through digital transformation.”

“Physical stores serve an indispensable role during the consumer journey, and should be enhanced through data-driven technology and personalized services in the digital economy,” he said. “By fully integrating online and physical channels together with our partners, we look forward to delivering an original and delightful shopping experience to Chinese consumers.”

The investment is just the latest by Alibaba in traditional retailing, as it bets heavily that future shoppers will engage in a mix of online and high-tech assisted offline buying. Earlier this year the company rolled out an unmanned convenience concept store with numerous high-tech bells and whistles, and was also reportedly setting up a similarly high-tech shopping mall in its hometown of Hangzhou. It also paid $80 million for supermarket operator Lianhua in May.