Opinion: China Has Options to Address Damage of Trade War 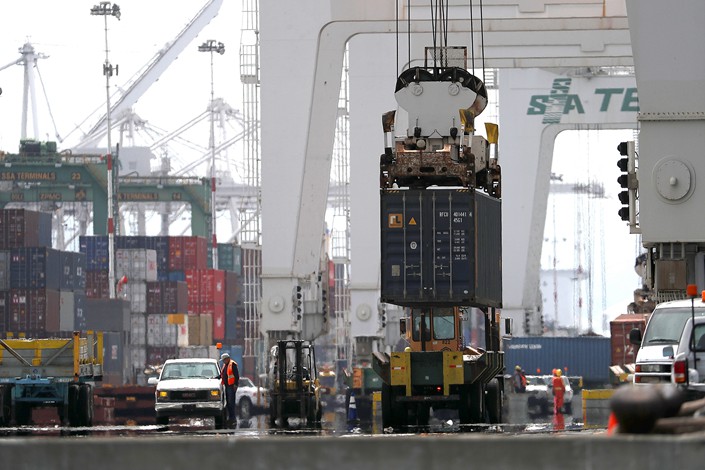 A shipping container is offloaded from a Hong Kong-based container ship at the Port of Oakland on June 20 in Oakland, California. Photo: VCG

The final list of products affected by the new tariffs primarily comprises electronics exported by China but doesn’t include phones, whole computers, auto parts and household appliances, among other products.

According to media reports, 300 product categories were removed from the final list, including those that cover Apple Inc. products and components, and health and defense products. In response to the new U.S. tariffs, China will raise tariffs as of Monday on $600 billion worth of U.S. products, but the rates have been changed from the original four-tier system of 5%, 10%, 20% and 25% to a new two-tier system of 5% and 10%.

I believe that if the U.S. really does raise tariffs to 25% in 2019, China could implement its original four-tier system, resulting in higher average tariffs on imports from the U.S.

Despite recent media reports that the U.S. has mentioned to China the possibility of resuming trade talks, I believe the two sides’ recent decisions to raise tariffs show that U.S.-China tensions cannot be resolved in the near future. Trump has even pointed out that if China retaliates, the U.S. will respond with tariffs on a third list of Chinese products worth around $267 billion.

Under these circumstances, there are doubts over whether the U.S. and China will go ahead with trade talks as scheduled, and unless all U.S. demands are satisfied, the U.S. is not in a hurry to reach an agreement with the Chinese side. Even though China still wishes to prevent the trade war from escalating, and may even find it difficult to implement retaliatory measures on the same scale as the U.S., China won’t necessarily accept all the conditions the U.S. will lay out, especially those that could place limits on China’s national strategies to move up the industrial value chain, as well as those that weaken the role of state-owned enterprises or reduce government intervention. Hence, we believe that there is an increased risk that the U.S. could raise tariffs on all Chinese products next year.

Could China and the U.S. possibly reach some kind of agreement? The negative impact of the latest U.S. tariffs on the Chinese economy are significant, so we believe China could be willing to make certain concessions, including increasing imports from the U.S., reducing exports to the U.S., strengthening intellectual property protections, continuing to lower import tariffs, increasing access to the domestic market, and ending forced technology transfers. In circumstances like these, there is hope that trade friction will come to an end, and both sides may retract some part of the tariff increases they have already implemented. However, if the U.S. persists in demanding that China give up its industrial strategy, or requests that it significantly reduce the role of state-owned enterprises and government intervention in the economy, the likelihood of the two sides reaching an agreement will be very low.

The impact of the latest round of tariffs

Under the current situation of 25% tariffs on $50 billion worth of Chinese goods and 10% on $200 billion, China’s gross domestic product (GDP) growth will be dragged downward by at least 0.5 percentage points in the first 12 months after the tariffs come into effect. If the U.S. raises tariffs on both groups of Chinese goods to 25%, China’s 2019 GDP growth could fall by over 0.8 percentage points.

This calculation doesn’t take into account the possibility that the U.S. could raise tariffs on imported cars. If this happens, the resulting weakening of global economic growth would also have negative consequences for the Chinese economy. It also doesn’t take into account the possibility that China could shift to trading more with markets other than the U.S. due to an escalation of the trade war. In other words, it assumes that China will export less, rather than export to different countries.

In the long term, the escalation of U.S.-China trade friction and higher tariffs could bring uncertainty to the business community and inhibit investment, Some of the production activity in the global supply chain could depart China, while some of the new production capacity targeted at the Chinese market could shift into China. These long-term effects are difficult to accurately quantify, but we predict that GDP growth potential in the next few years will face downward pressure.

What are China’s options?

I expect China to use the following measures to boost exports: strengthening trade with other trade partners; offering higher tax rebates for export products, thus increasing support through trade credit and improving customs clearance efficiency; and allowing the yuan to further depreciate by a small margin. The government could also provide financial assistance to laid-off employees of export enterprises. It is estimated that between 500,000 to 1.2 million workers could be affected by the trade war.

The Chinese government will continue to expand market access for foreign enterprises and strengthen intellectual property protections in order to attract foreign capital and maintain the stability of foreign direct investment. It will not punish U.S. companies with operations in China.

I predict that China will continue to loosen domestic policies in order to counteract the effect of trade friction on economic growth. The government has already begun to loosen domestic monetary, credit, fiscal and financial regulations since the end of May, partly to correct the situation of overly restrictive policies in the first half of 2018. I recommend that investors watch whether the National Development and Reform Commission and other committees launch more investment projects, whether local government bonds and credit growth rebound, and whether the growth of capital construction investment recovers over the next few months.

In the next few months, especially at the central economic work conference in December, the government may announce more policies and measures to take effect in the first quarter of 2019. We believe the central bank’s willingness to use cuts to the reserve requirement ratio may improve — we expect the central bank to cut the requirement by at least 100 basis points before the end of this year, and continue to lower the requirement in 2019. However, there are limits to how much the central bank can loosen monetary policy or stabilize the exchange rate through adjusting the reserve requirement ratio. Market interest rates are expected to fall slightly, while long-term bond yields will continue to weaken in 2019. But basic interest rates on deposit loans will not change.

We believe that China will not punish U.S. companies with operations in China, or ban the sale of U.S. products. Nor will it set up non-tariff obstacles against U.S. enterprises or dump U.S. Treasury bonds. This could be because the government believes these measures will cost more than they’re worth, with limited ability to inflict damage on the U.S. economy and shift the U.S. position on trade conflict. At the same time, they would place pressure on employment and foreign investment in China.

Wang Tao is the head of China economic research at UBS. This piece was translated from Chinese and edited for length.