Maldives Vote Seen as Rebuff to Belt and Road 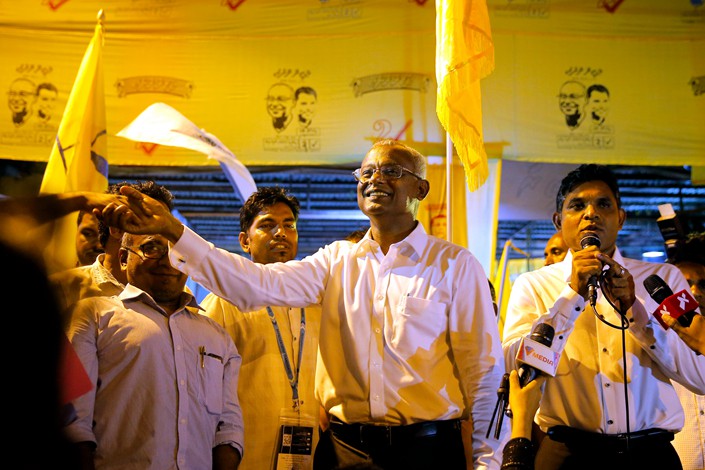 The victor in the Maldives' recent presidential election, Ibrahim Mohamed Solih (center), shakes the hand of a supporter at a gathering in the country's capital Male on Sept. 24. Photo: IC

Despite widespread concerns from non-governmental organizations that the election would be rigged in the incumbent government’s favor, Solih received 134,616 votes to Yameen’s 96,132, according to preliminary results on Sunday, with a strong voter turnout of 89% buoying the opposition. Yameen conceded defeat and will step down in November.

The opposition accused Yameen of undermining the Indian Ocean nation’s fragile democratic institutions, particularly when he implemented a state of emergency in February during which he suspended Parliament and arrested two Supreme Court justices after they overturned the convictions of nine opposition politicians, including the country’s ousted former leader. Solih has promised to restore confidence in the country’s democracy and introduce greater transparency in government dealings.

But another factor in Yameen’s defeat was public concern over his cozying up to China, said Hannah Cotillon, a political risk analyst with AKE International. Despite Beijing not having an embassy in the country until 2011, Yameen fostered ties with China in order to counterbalance India’s long-standing influence, with Chinese companies being awarded contracts for major investment projects that include an $830 million airport upgrade and a $400 million bridge, according to a report from the Center for Global Development.

Such projects have led to major concerns over repayment, with the opposition claiming that debts to China constitute 70% of the country’s total external debt. The International Monetary Fund also expressed alarm in a report in December, saying, “The rapid debt buildup, a widening current account deficit, and low international reserves leave the Maldives inherently vulnerable under this constellation of risks and reduced policy space.”

“It appears in the eyes of many voters, Chinese projects are too closely associated with Yameen and his dictatorial tendencies, and that has undermined trust,” Cotillon said.

When rumors surfaced in February that India was considering responding to Yameen’s state of emergency with a military intervention, an editorial in the Chinese state-run Global Times warned that “China will take action to stop New Delhi. That suggested to many Maldivians that China was Yameen’s guardian angel,” Cotillon said.

The Maldives is not the only country in which voters have expressed concern over the debts involved in projects falling under China’s Belt and Road Initiative, which aims to develop infrastructure loosely along the lines of country’s ancient trade routes. After a surprise election victory, Malaysian Prime Minister Mahathir Mohamad announced in August that over $23 billion of Chinese projects were “canceled for now.” In Sri Lanka in February, opposition leader Mahinda Rajapaksa scored major victories in local elections against the government over the latter’s decision to give the Hambantota Port to China on a 99-year lease to help repay debts. Similarly, several Chinese-backed projects in Myanmar were put on ice after Aung San Suu Kyi’s National League for Democracy came into government at the end of March 2016.

“There are many voters and elections to be held along Belt and Road countries,” Cotillon said. “If the initiative is to be a success, China must do more to allay those voters’ fears over Beijing’s intentions and over the potential debt issues over China-backed projects.”