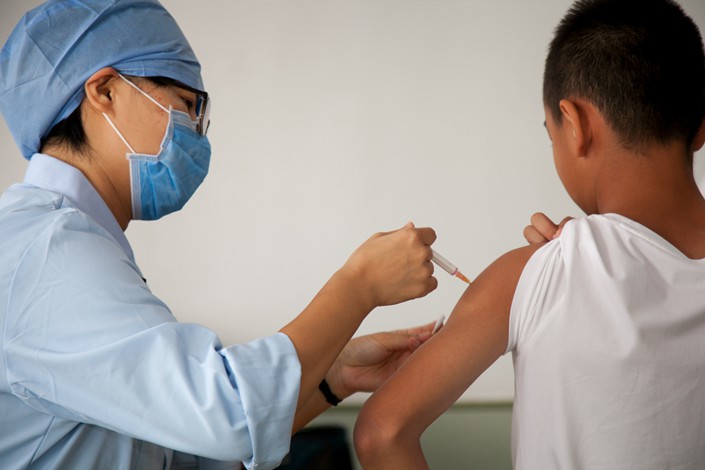 A middle school student gets vaccinated in Beijing on Sept. 14. Photo: VCG

The head of the disease control center of East China’s Shandong province, which has been the hardest hit by a shoddy-vaccine scandal that affected hundreds of thousands of children, has been sacked from his post and placed under investigation, Caixin has learned.

The removal and investigation of Bi Zhenqiang, 55, director and party chief of the Shandong Center for Disease Control and Prevention (SCDCP), was announced at a regular meeting of the agency’s midlevel officials on Tuesday, a source with the organization, who declined to be named told Caixin.

Shandong is at the center of the vaccine scandal that was first revealed in July. Government investigations found that Changchun Changsheng Life Sciences Ltd., based in the northeastern province of Jilin, produced and sold nearly 500,000 doses of poor-quality vaccine for diphtheria, pertussis and tetanus (DPT), a group of bacterial diseases, according to a previous report by the official Xinhua News Agency. More than 476,000 doses were sold to Shandong, with the number of injections hitting nearly 460,000, according to Caixin’s calculation based on two statements by the SCDCP (links in Chinese).

DPT vaccination is mandatory in China. The vaccines are paid for by the government, and their purchases are controlled by provincial disease control and prevention centers, according to Chinese regulations.

It remains unclear whether Bi’s fall is linked to the bogus-vaccine case.

In late July, while the scandal was still developing, Bi subordinate Song Lizhi, who was in charge of the management of vaccinations in Shandong, died after being injected with an excessively high dose of insulin. Sources with knowledge of the matter said that Song, who was cooperating with official investigations into the vaccine scandal, suffered from severe diabetes and hypertension.

Shandong is prone to vaccine problems. Last week, the government of Dingtao district in Shandong’s Heze city published a note (link in Chinese) saying that employees of the local disease control and prevention center misused bacillus Calmette-Guerin vaccine, which guards primarily against tuberculosis, as a purified protein derivative, which is used for a skin test to determine the infection of the disease.

In 2016, Shandong police uncovered a criminal ring based in the province that sold more than 2 million nearly expired or nearly spoiled vaccines to dozens of provincial-level areas across the country.

The DPT vaccine case has led to the firing of several senior officials, including a vice governor of Jilin province and the party chief of China’s market regulator. Eighteen Changchun Changsheng employees, including its president, were arrested on July 29.