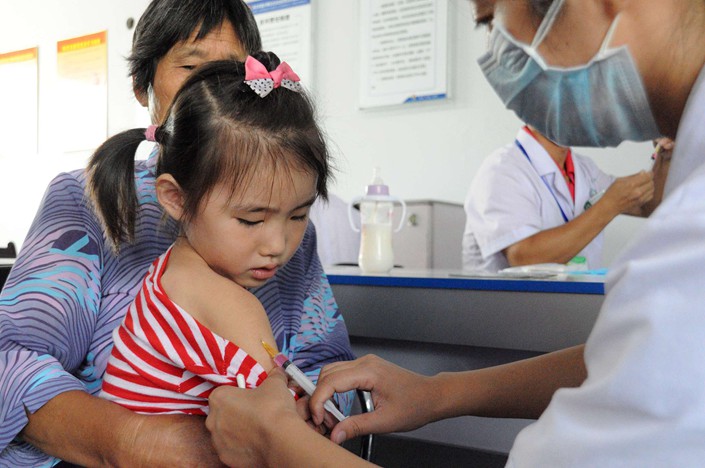 A girl receives a vaccination at a community health center in Tengzhou, East China's Shandong province, on Aug. 7. Photo: VCG

A scandal surrounding a Chinese vaccine-maker has widened, as investigators said they have uncovered double the number of substandard vaccines than initially suspected and senior officials have lost their jobs.

In July, government inspectors found that Changchun Changsheng Life Sciences Ltd. had produced and sold 250,000 doses of poor-quality vaccines for diphtheria, pertussis and tetanus (DPT), a group of bacterial diseases.

Changchun Changsheng is based in the northeastern province of Jilin, though most of the shoddy vaccines were sold in the eastern provinces of Shandong and Anhui, investigators said.

Most of the vaccines were administered to children.

News of the scandal spread widely on social media in China, as did posts from concerned parents.

Eighteen Changchun Changsheng employees, including its president, were arrested on July 29.

The central government did not say how it made the new discovery, why there was such a large discrepancy from the earlier number reported by the province-level inspectors, or whether local governments may have been trying to cover up the scale of the problem.

Jilin Vice Governor Jin Yuhui, who was in charge of food and drug safety, has been removed from his post because of the vaccine scandal, the Communist Party's top leadership announced on Thursday.

Liu Changlong, mayor of Jilin capital Changchun, has been forced to resign, the official Xinhua News Agency quoted a Politburo Standing Committee statement as saying. Dozens of other officials in Jilin have also been held responsible.

Bi Jingquan, the party secretary of the State Administration of Market Regulation, which oversees drug regulation, was ordered to step down. Bi was head of the China Food and Drug Administration (CFDA) before the agency merged with other organizations to form the market regulator in March.

Wu Zhen, former deputy head of the CFDA, has been put under an investigation by the party’s disciplinary body, the statement said.

The meeting was presided over by President Xi Jinping, who gave a speech, Xinhua said.

The vaccine scandal has shown the neglect of regulators at various levels, as well as the loopholes in the regulatory system, the statement said.

The authorities will learn from the lesson and build a sound long-term regulatory system to safeguard public health, it said.

The state drug regulator has also been ordered to review its work and report to the party’s Central Committee and the State Council, the cabinet.

The new revelation is likely to increase the pall over an industry that has already been stung by numerous scandals in recent years.

Changchun Changsheng itself was previously ordered to stop making its rabies vaccine after it was found to have tampered with production data.

In 2016, the company was among a group of pharmaceutical firms that supplied vaccines worth 260 million yuan ($38.9 million) to an unlicensed dealer that did not have adequate refrigeration facilities, potentially jeopardizing the effectiveness of the vaccines and placing patients’ health at risk.

No children exposed to the substandard DPT vaccines have been sickened so far, and they have been given new immunizations, according to the Shandong Center for Disease Control and Prevention.