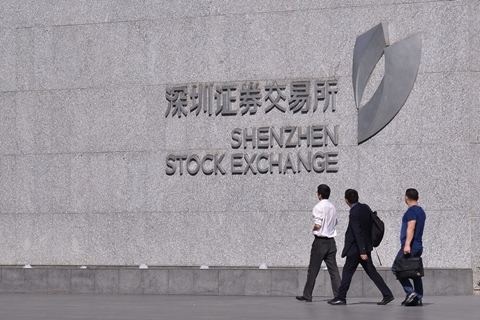 After China celebrated the Mid-Autumn Festival, a traditional holiday with a custom of family reunion, China’s stock market was shocked by the death of a senior executive of one of the two major exchanges.

Xiao Jinfeng, the head of the governing department of the Small and Medium Enterprises (SME) Board of the Shenzhen Stock Exchange, was found dead at his home Monday night, the exchange said Tuesday in a statement published on the social media site Weibo.

Xiao, in his early 40s, reportedly committed suicide by hanging, although there hasn’t been an official ruling. The reason wasn’t clear. There was no evidence or hint that his death was related to his work, Caixin learned. A person close to the matter told Caixin that Xiao was just promoted to director of the SME board from vice director earlier this year.

There was speculation that he might have suffered depression, but rumors weren’t confirmed by his family. His mother passed away a couple of months ago, the person close to the matter said.

Xiao was highly regarded in both his private and professional life. With a Ph.D. in international law from Wuhan University and as a certified public accountant, Xiao was a council member of China Securities Law Research Association. He often taught accounting courses for chief financial officers and financial staff at investment banks and listed companies.

Last month, Xiao was shortlisted to become a member of the 10th Listing Committee of the Shenzhen Stock Exchange, an independent administrative decision maker and an advisory body made up of officials and professionals from the Shenzhen exchange, the securities regulator, accounting firms, law firms and listed companies, to review applications for initial public offerings.

Xiao’s last public appearance was at a forum for listed Chinese companies held in early July. Speaking at the forum, he said he expected that listed companies would face more challenges in mergers and acquisitions, especially excessive valuations and pressures for acquirers to meet earnings projections.

Growing up in a village, Xiao knew nothing about finance before college, he told a group of students at a career exploration lecture in April. He studied accounting at college but he found that working at an accounting firm didn’t suit him. Then he learned about securities and found his real interest, he said in the lecture.