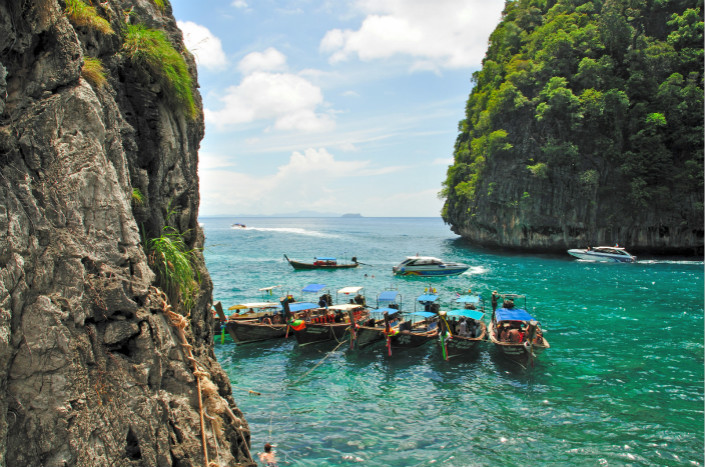 (Bloomberg) — Chinese tourist arrivals in Thailand are tumbling, dragging down overall visitor growth in the Southeast Asian nation and dimming the outlook for an economy that relies on spending by holidaymakers.

Travelers from China slid 12% in August, the biggest drop in more than a year, keeping the overall pace of visitor growth near a 16-month low. Thai officials are rattled as Chinese visitors are the top source of foreign receipts in an industry that makes up about a fifth of the economy.

The trigger for the drop was a tour boat accident off Phuket in July that killed dozens of Chinese holidaymakers, sparking safety concerns. Thailand’s image in China has also been hurt by a dengue outbreak, the strength of the baht and, most recently, a viral video of an airport guard apparently punching a Chinese tourist.

“The negative growth in Chinese arrivals is a downside risk in the second half of 2018,” said Kampon Adireksombat, the chief economist at Kasikorn Securities Pcl in Bangkok. The tourism slowdown and the impact of global trade disputes will cut Thai economic growth to 4.2% next year from an estimated 4.5% in 2018, he said.

The Thai military government this week moved to limit the damage from the video of the attack on the Chinese tourist, saying on Twitter that Prime Minister Prayuth Chan-Ocha regrets the incident — underlining the administration’s sensitivity to bad press on the mainland.

The tourism sector has a history of bouncing back from setbacks. The Bank of Thailand expects arrivals to improve and anticipates over 38 million visitors this year — equivalent to more than half the Thai population. Other government figures estimate that Chinese travelers contribute close to a third of 2.09 trillion baht ($65 billion) in foreign tourism revenue.

The recovery may take longer this time around because so many Chinese died in the boat accident, Kampon said.

Tourism trade bodies are urging the government to take steps such as temporarily providing double-entry visas or visa-free travel to Chinese visitors. Investors are fretting too: the Stock Exchange of Thailand Tourism & Leisure Index is down 14% this year, compared with a 0.3% decline in the overall stock market.

The Tourism Council of Thailand predicts Chinese arrivals will plunge around a quarter to 1.9 million in October through December from a year earlier.

“There used to be seven to 12 charter flights per day from China to Krabi,” said the council’s President Ittirith Kinglake. “Now it’s down to three flights per day with some having two to three people on board.”

For all the challenges, overall arrivals continue to expand: Bangkok is the world’s most visited city, and the beach resorts of Krabi and Phuket lure travelers from all over the world.

But Thailand has to act quickly to restore the confidence of Chinese travelers, said Vichit Prakobkosol, the president of the Association of Thai Travel Agents.

“Otherwise, we could lose Chinese visitors to other countries,” said Vichit. “If we can fix this soon, Thailand can recover.”