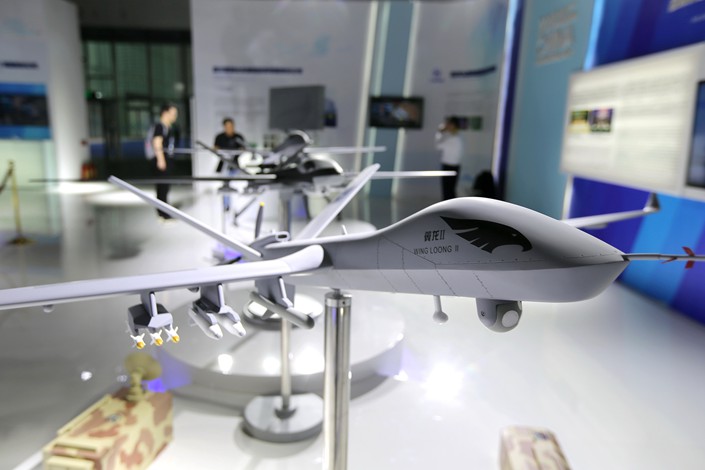 A model of a Wing Loong II drone is displayed at the Chengdu International Exhibition and Convention Center on Sept. 20. Photo: VCG

The Chinese military will help Pakistan build 48 of its advanced attack and reconnaissance drone models in a move that could signal greater military cooperation between the countries.

It did not indicate the size of the deal or the project’s timespan, but it is likely the drones will be built in Pakistan.

The Wing Loong II, which made its maiden flight in February 2017, is capable of launching missile strikes and undertaking reconnaissance missions. It is believed to be China’s answer to the U.S.’s mainstay MQ-9 Reaper drone.

China, which is aiming to capitalize on U.S. government restrictions on its own defense industry, is planning to sell the Wing Loong II to buyers such as Saudi Arabia and Myanmar, according to a recent report by the RAND Corporation, a U.S. think tank.

The countries are also cooperating on the China-Pakistan Economic Corridor, a 15-year project valued at over $62 billion to develop power, rail and port facilities across Pakistan.

Pakistan’s move last week to cut a planned Chinese loan for a railway project from $8.2 billion to $6.2 billion caused some analysts to suggest a rift was growing in the relationship. The new military deal, however, indicates this is not the case, said Harish Natarajan, head economist at risk consultancy AKE International.

“China and Pakistan have been deepening their military relations over the last few years. Arguably, defense cooperation is as important to the bilateral relationship as increased Chinese commercial investment.” Natarajan said.

“The importance of the relationship to China is that it gives Beijing better access to the Arabian Sea and is a counterbalance to Indian influence, given that China and India are in a low-intensity Cold War, especially in the Indian Ocean.”

India and China had a two-month standoff last year when the Chinese military attempted to construct a road in the disputed Doklam region, a territory claimed by both China and Bhutan, an Indian military ally. Tensions also flared over the Maldives earlier this year when both sides threatened to become involved if the other intervened in a political crisis on the tiny archipelago nation.

India’s media was quick to respond to the drone deal announcement, pointing out it was made just days after India said it would acquire missile defense systems from Russia — an announcement that came during President Vladimir Putin’s visit to the country.

While the timing is “likely coincidental,” it is also “highly plausible” the drone deal will lead to further military developments between the countries, Natarajan said. “It’s useful for Pakistan as military cooperation with the U.S. has decreased, especially under the Trump administration,” he said.

“And India’s defense capabilities are growing, due both to a rise in high quality defense imports, and the development of its domestic defense manufacturing sector,” he said.