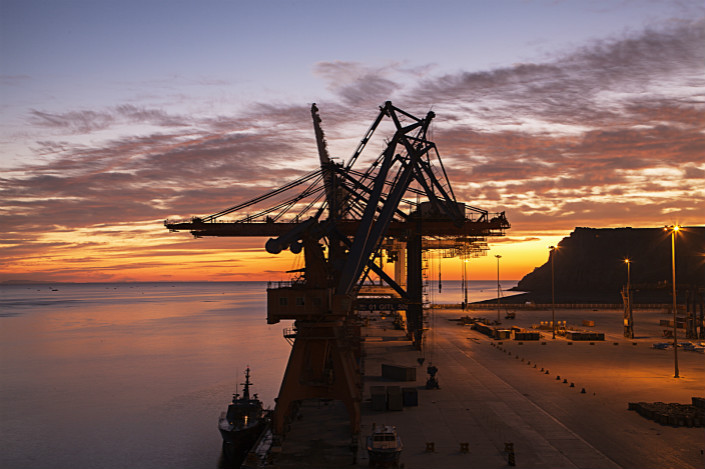 Construction takes place at the Gwadar Port facility that is part of the China-Pakistan Economic Corridor. Photo: VCG

Pakistan has cut the size of a key Chinese railway project “of strategic nature” by $2 billion, a government minister said Monday, amid a growing wave of similar scale-backs by countries worried about assuming heavy debt burdens under China’s “Belt and Road Initiative.”

“Pakistan is a poor country that cannot afford huge burden of the loans,” Railways Minister Sheikh Rasheed told a news conference in Lahore, according to a Reuters report. “Therefore, we have reduced the loan from China under CPEC for rail projects from $8.2 billion to $6.2 billion,” he added, referring to the China-Pakistan Economic Corridor (CPEC), a 15-year project valued at over $62 billion.

The project in question, due for completion in 2022, aims to expand and reconstruct the 1,872 kilometer Main Line-1 (ML-1) railway line connecting Karachi on the Arabian Sea to Peshawar in Pakistan’s north.

CPEC is a key part of China's ambitious Belt and Road Initiative, which aims to develop infrastructure projects overseas with Chinese companies’ support and financing. The administration of Prime Minister Imran Khan, who took office in August and is due to visit China this month, appears to be more wary of CPEC than that of his predecessor. In September the Financial Times quoted a concerned member of his cabinet as saying that Pakistan should “put everything on hold for a year.” Khan has reaffirmed his commitment to CPEC, however.

The cautionary shift in Pakistan follows a similar pattern seen in Sri Lanka and Malaysia, whose leaders also expressed concern about overly burdensome debt from Belt and Road-related projects after elections saw incumbent leaders replaced by the opposition.

“Projects are at risk more for delay than cancellation due to debt concerns, at least in the short term,” said Harish Natarajan, head of economic risk consultancy at AKE, a consultant. “The main criticisms of CPEC in Pakistan are that it will benefit a smaller number of Pakistani companies, or exclude some regions. But there’s no serious rethink of the relationship.”

Railways were once Pakistan’s main mode of transportation, but poor management and maintenance led to the industry’s dramatic decline, according to a World Bank report from 2013. Between 1955 and 1960, railways handled 73% of freight traffic in Pakistan, compared to less than 4% by 2011, the report said.

To bring back the form of transport, Pakistan has made railways a key focus of “Pakistan Vision 2025,” a top-level program for the country’s development. The program mentions specific upgrades — such as increasing railway speeds — that the ML-1 project aims to implement. ML-1 was also the only project which was specifically labelled “of strategic nature” in the official long term-plan for CPEC, which was unveiled by Chinese and Pakistani officials in December 2017.

Pakistan is one of the eight countries most at risk of debt distress as a result of Chinese lending via the Belt and Road Initiative, according a March report by the Center for Global Development, a think tank. Another country on this list was the Maldives, where a shock recent election result may have reflected voter concerns over the Indian Ocean nation’s growing indebtedness to Beijing.

The Center for Global Development report recommended reducing debt risks by increasing multilateral involvement in Belt and Road projects, a strategy that the Chinese government has also encouraged in some cases. The Asia Development Bank (ADB) was set to be involved in the ML-1 project by supplying some of the financing. But Pakistan’s government rejected the ADB’s involvement last year under pressure from Beijing, according to reports from Dawn, a local paper.

“China strongly argued that two-sourced financing would create problems and the project would suffer,” Ahsan Iqbal, then Pakistan’s minister for planning and development, told a news conference in April 2017, according to the paper.

Several other countries have shown concern over potential debt-related downsides of the Belt and Road Initiative. After a surprise election victory this year, Malaysian Prime Minister Mahathir Mohamad announced in August that over $23 billion of Chinese projects, including railways, were “canceled for now.”

In Sri Lanka in 2015, opposition leader Maithripala Sirisena defeated the incumbent in elections, and also proceeded to question the wisdom of some costly China-backed projects. His administration later gave one of the biggest projects, the Hambantota Port, to China on a 99-year lease to help repay debts. Similarly, several Chinese-backed projects in Myanmar were put on ice after Aung San Suu Kyi’s National League for Democracy came into government in March 2016.