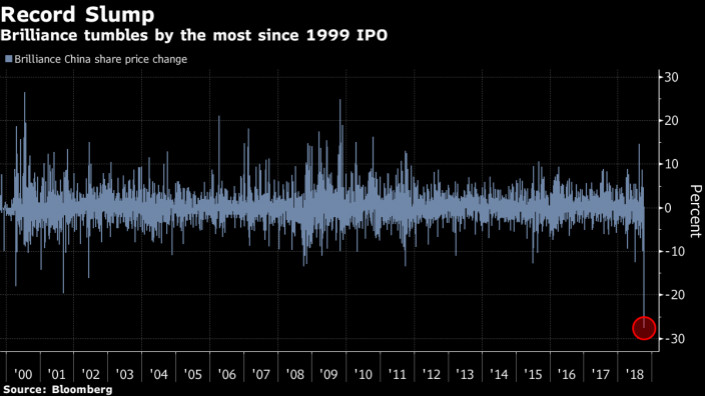 (Bloomberg) — Brilliance China Automotive Holding Ltd. sank by a record as shares traded for the first time since BMW AG secured control of their joint venture.

Brilliance fell as much as 30% in Hong Kong trading as a slew of brokerages downgraded the automaker after BMW said Thursday it is increasing its stake in the venture to 75% from 50%. The partnership accounted for most of Brilliance’s profit last year.

Citigroup Inc. cut its price target by 73% and recommended selling the shares, saying the "unfair" deal will hurt the company’s earnings, while CLSA said minority shareholders are the losers because Brilliance is forced to sell at a discount. The agreement gives BMW a bigger say over its business in China, and lets it keep more of the earnings it generates in the massive market.

“A smaller stake in the joint venture means less earnings contribution to Brilliance China and that’s the only thing investors are sure of right now,” said Angus Chan, Shanghai-based an analyst at Bocom International Holdings Co.

The pact shows China’s government is following through on its pledge to open up the economy to foreign ownership after the 50:50 joint-venture rule that has restricted global brands’ access to the market for decades. BMW said its deal will be completed in 2022.