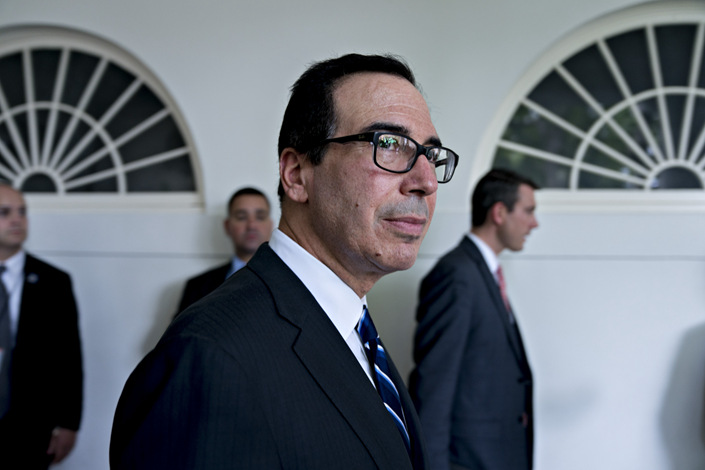 (Bloomberg) — The U.S. Treasury Department’s staff has advised Secretary Steven Mnuchin that China isn’t manipulating the yuan as the Trump administration prepares to issue a closely watched report on foreign currencies, according to two people familiar with the matter.

The conclusion, if accepted by Mnuchin, would avert an escalation of the U.S.-China trade war and remove a source of anxiety for emerging markets. Mnuchin could issue a different finding.

President Donald Trump has publicly and privately pressured Mnuchin to declare China a currency manipulator, but Treasury staff haven’t found grounds to do so, according to the people, who spoke on the condition of anonymity. Formally accusing China of manipulating the renminbi wouldn’t trigger any sanctions or retribution, but the move would heighten tensions between the world’s two biggest economies.

The Treasury Department’s congressionally mandated twice-a-year report assessing whether trade partners are manipulating their currencies is on track for release next week, the people said.

China will remain on a monitoring list for currency manipulation because of its significant trade surplus with the U.S., the people said. A draft report ratchets up criticism of Beijing for failing to rectify its trade imbalance, and also singles out several other countries for eroding the U.S.’s competitive edge, the people said.

In an interview with Bloomberg News on Thursday, Mnuchin declined to comment on the report.

“We are concerned about the depreciation” of the yuan, he said, “and want to make sure that it’s not being used as a competitive devaluation.”

Mnuchin has said since July that Treasury is concerned about the yuan’s recent drop. The currency has slid nearly 9% against the dollar in the last six months, raising speculation that China has been deliberately weakening its currency as tensions with the U.S. escalate.

The Trump administration has pivoted to a more aggressive stance toward China since the president said last month the country is interfering in U.S. elections. Vice President Mike Pence delivered a speech last week in Washington signaling a firmer U.S. push-back against Beijing as trade anxiety weighs on the looming midterm congressional elections.

If the U.S. labels a country a currency manipulator, Treasury must enter direct talks with the country, and also seek redress through the International Monetary Fund. The last country declared a manipulator was China, in 1994.

The Treasury department’s staff findings match broader consensus on the yuan’s depreciation. Labeling China a manipulator could lead to a currency war, which IMF Managing Director Christine Lagarde said would hurt the global economy. Finance ministers and central bankers from around the world, including Mnuchin, are gathered in Bali, Indonesia for the IMF’s annual meetings, where currencies are a key issue.

“We are seeing more and more — China included — countries that actually let their currency fluctuate, and that certainly has been the case over the last three years as far as China is concerned,” Lagarde said. She pointed to the dollar’s strength as the main culprit for the weaker Chinese currency.

Should Mnuchin choose to follow his staff’s advice about the yuan, he may face push-back within the White House. Trump has tweeted that he thinks China is manipulating its currency. In April, he tweeted the claim three days after Treasury released a report finding that no major trade partner was gaming its currency.

“Until they allow their currency to float freely, they are guilty,” said Dan DiMicco, a former chief executive officer for the steelmaker Nucor Corp. who was an adviser to Trump’s campaign and presidential transition and now sits on an advisory committee for U.S. Trade Representative Robert Lighthizer. “It’s semantics until then.”