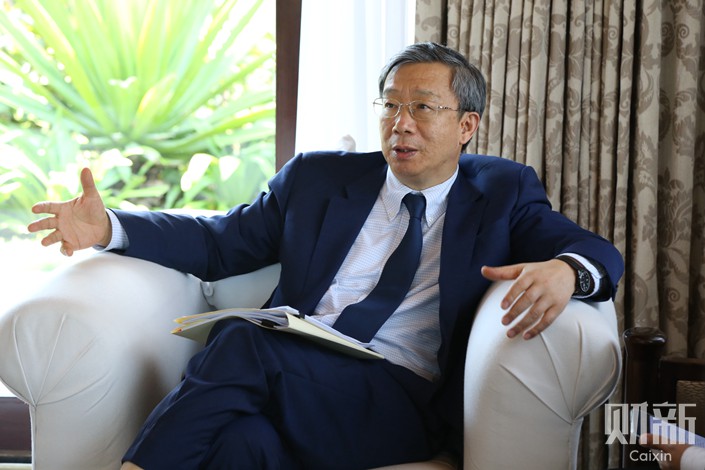 The global and Chinese economies have undergone profound changes in the past six months.

Sino-U.S. trade frictions have graduated from mere threats to reality, and the frictions have been escalating with effects on the macroeconomic level. The U.S. Federal Reserve has raised interest rates twice since June. Affected by a strengthened dollar, capital flows into emerging markets have decreased, the financial situation has tightened, and economic growth continues to weaken. The International Monetary Fund lowered its forecast for world economic growth in October for the first time in two years.

Within China, circumstances have also changed. Tightened financial supervision and the promotion of deleveraging have placed significant downward pressure on growth. As the second half of the year began, policymakers moved toward a strategy of “stability.” China’s central bank has cut the reserve requirement ratio three times since April, releasing hundreds of billions of yuan.

But Yi Gang, China’s central bank chief, remains optimistic about the country’s macroeconomic prospects, he told Caixin on the sidelines of the International Monetary Fund’s ongoing annual meetings in Bali.

Yi addressed fears of a “consumption downgrade” and explained the reasoning behind recent central bank decisions, including last week’s reserve requirement ratio cut, in an interview this week with Caixin.

Caixin: With 2018 drawing to a close, what is your view of China’s economic situation?

Yi Gang: At present, China’s macroeconomy is functioning smoothly. Data for the third quarter will come out soon, and the growth target set at the beginning of the year is achievable. The consumer price index’s year-on-year increase of 2.3% and the producer price index’s year-on-year increase of 4.1% can be described as relatively appropriate. This a good range for overall consumption, business profits, taxation, and nominal GDP growth rates. I’m not worried about inflationary pressures. Nor am I worried about deflationary pressures.

In terms of the balance of payments, we are currently in a state of relative equilibrium. The current account (surplus) will see a certain amount of contraction. Last year, the trade surplus accounted for 1.3% of GDP. This year, if it is a positive value, it will be less than 1% of GDP. But, in fact, in the first quarter and the first half of the year, there was a current account deficit.

In the financial system, we have achieved overall risk control. Among the three major targets set by the 19th Party Congress, guarding against and defusing financial risks was the top priority. We have defused risks smoothly, controlling major risk areas such as macroeconomic leverage. Whether it is the M2 or the ratio of total debt to GDP, it can be said to have stabilized. Money supply and credit growth have been moderate this year, and there has been a strong emphasis on supporting the real economy and small and medium-sized enterprises.

Stabilized macroeconomic leverage is a good thing. We have talked about “deleveraging” for many years. The fact that leverage is now stabilized is a major change. At the same time, we have seen the structural optimization of the of the leverage ratio. The leverage ratio of state-owned enterprises is declining, and the cost of local debt has been reduced through measures such as debt-for-equity swaps. The economic structure has also continued to be optimized. All these factors point toward us having more confidence to enter the stage of high-quality development.

High-quality development means having a relatively appropriate growth rate while improving the quality of growth. This transformation will also be reflected in the allocation of financial assets. Many opportunities for asset allocation will appear. China is currently at a critical juncture for the development of a good direction in this transition process, whether it is in areas like the consideration of direct and indirect financing, the development of the capital market, or in terms of considering asset allocation from the perspective of residents, businesses or even the whole world. I have confidence in this change. We should note that China’s transition toward high-quality development is a steady and orderly change.

Talk of a “consumption downgrade” has been circulating in the market. But do you think there is any reason to worry about consumption growth?

Macroeconomic data shows that the contribution of consumption to economic growth is increasing. In the first half of this year, final consumption expenditures accounted for 78% of GDP growth, 47 percentage points more than what capital formation contributed.

I have confidence in China’s domestic demand. Currently, domestic demand is the biggest contributor to China’s GDP growth. Consumption accounts for the largest part of domestic demand, while the proportion accounted for by the service industry will continue to rise. In the upgrading process, consumption growth and services growth are the most important vehicles for moving toward high quality.

The central bank launched its fourth targeted reserve ratio requirement cut of the year last week. Although the market had expected a move like this, the 100-basis point reduction is still somewhat surprising. What were the considerations behind this policy?

This cut reduced the reserve ratio requirement by 1 percentage point and released around 1.2 trillion yuan. Out of this, 450 billion yuan is supposed to hedge against expiring medium-term lending facilities. The final amount released is around 750 billion yuan. This amount can be considerate appropriate.

The other thing is to look at the structure and the timing. The starting date for this RRR cut is Oct. 15, which is the mid-month tax payment date. Once you factor in these, it is more moderate and reasonable from a liquidity perspective. For banks, in addition to the required deposit reserves, payments, settlements, financial market operations and even economic operations require a reasonable level of liquidity. It’s just like how oil must be added to machines to help them work efficiently. Therefore, one of the central bank’s important tasks is maintaining reasonable liquidity.

At the end of September, the U.S. Federal Reserve raised interest rates for the fourth time this year, sending ripples through the market. But the People’s Bank of China has not followed suit. What is the reasoning behind this decision?

Given the global economy’s integration, financial markets are interconnected and the actions of major international central banks definitely affect us. However, when weighing, choosing and considering these external factors, our principle is to focus on the domestic, and focus on how to let the Chinese economy pursue high-quality development while controlling financial risks.

Once we have considered these factors, we will see that China and the United States are indeed oriented toward different directions in terms of monetary policy. The United States has been in the process of continually raising interest rates, raising them eight times, and there are plans and a timetable for future interest rate increases. China, on the other hand, is currently facing the pressure of slowing economic growth, and the interest rate is appropriate. That is why the two Fed rate hikes have not moved China’s interest rates.

I previously mentioned that we are implementing a prudent and neutral monetary policy. In addition to looking at M2 and the scale of social financing and credit, we must also look at interest rates. Interest rates are the most important indicator of monetary conditions. China’s interest rate has been stable in recent times. For example, the 10-year government bond rate has fallen slightly since the start of the year. Also, for example, the seven-day repurchase rate, which the market is paying more attention to, is also slightly lower. This shows that our monetary policy is stable and neutral, and interest rates are appropriate. This is why we did not follow major countries in raising interest rates.

China has been promoting a new round of financial opening-up since the start of this year. What has been done so far?

Among these 11 items, seven have already been implemented. The four others will be implemented by the end of this year. So that means, this time, for our financial market opening-up, the scope is wide, covering banking, security, insurance, rating companies, and also payment, financial services as third-party payment, electronic payment and internet payment. Secondly, this financial opening, in terms of debts, is very deep and touches fundamental points of the market.

So, we are going to pretty much eliminate the equity cap for foreign financial institutions and give them full licenses based on qualifications, merit-based. It’s no longer based on origin, whether it’s foreign or domestic, whether it’s public or private. That’s the second aspect.

The third aspect is that implementation should be rapid and thorough. We will try to get all these opening-up policy measures realized by the end of this year. So you will see something like the Shanghai-London Stock (Connect); you will see QFII (qualified Foreign Institutional Investor program) and RQFII (RMB Qualified Foreign Institutional Investor program) become more convenient; you will see the financial market is more open in terms of fixed income market and equity market. You will see A-shares in the MSCI index and FTSE Russell index. These kinds of developments will be happening rapidly.

As I’ve emphasized on various occasions, we have three principles for China’s financial opening-up.

The first is, we think financial services is a competitive service industry, so we should follow the pre-establishment national treatment and negative list approach. The second is, when you open the financial market, you have to (simultaneously) consider the exchange rate regime as well as capital account convertibility. These three items should be developed in tandem. Financial opening-up, flexible exchange rate and also capital account convertibility should go in tandem.

The third (principle) is the financial risk. When you are opening up, you have to have regulatory supervision capabilities, so one of the principles we want to follow is that the degree or speed of opening-up has to be consistent with our regulation and supervision capability.

I think, in sum, we are determined. Even so, we have the voice of protectionism questioning of globalization; we have the voice of questioning the rule-based multilateral international order and system. Despite all of those questions and doubts, China will continue (in the) reform and opening-up direction. I think that's good for China and good for the rest of the world.