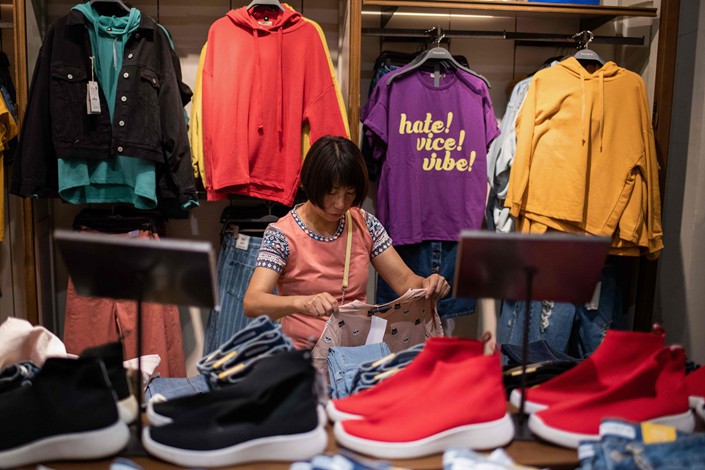 A shopper examines a T-shirt at a mall in Beijing on Sept. 10. Photo: VCG

* Producer price index increased 3.6% from a year earlier, down from August’s 4.1% growth rate

The consumer price index (CPI), which measures the prices of a basket of consumer goods and services, rose 2.5% year-on-year in September, marking the highest growth rate in seven months, according to data released by the National Bureau of Statistics (NBS).

The producer price index (PPI), which tracks the prices of goods bought and sold by manufacturers and mining companies, increased 3.6% from a year earlier in September, down from August’s 4.1% growth, NBS data showed. The latest PPI growth reading was the lowest in five months, partly due to a high base comparison from a year earlier.

“The recent rise in (the) CPI is due to temporary disruptions to food supply and is unlikely to prevent the People’s Bank (of China) from loosening monetary policy further in the coming months in a bid to shore up economic growth,” Julian Evans-Pritchard, an economist with research firm Capital Economics, said in a note.

People’s Bank of China Governor Yi Gang said Sunday that there’s still ample space to adjust interest rates and reserve requirement ratios for banks, indicating the central bank may continue to inject liquidity into the banking system to grease the wheels of the economy as trade tensions escalate with the U.S.

“As inflation is now evolving in line with expectations, its influence on policy should be limited,” said David Qu, economist at Australia and New Zealand Banking Group.

The growth of PPI was mainly driven by higher prices in the oil and gas extraction sector, which were up 41.2%, as oil and gas prices rose in global markets.

September’s oil price gains would not be sustainable, which is reflected in falling prices this month, said Evans-Pritchard. “The bigger picture is that broader factory-gate price pressures still appear to be cooling alongside economic activity,” he said.

Runaway inflation is unlikely to occur in China right now given the softening economy and tightened liquidity, said Larry Hu and Irene Wu, of consulting firm Macquarie Group, in a joint note. They also predicted CPI inflation would rise by around 2.5% in October and 2.3% for all of 2018.

“The major risk is of course oil prices. The ongoing trade tension with the U.S. could also push up prices for certain goods such as soybean, but the impact is relatively limited at around 0.2 percentage point for CPI inflation, in our view,” they added.