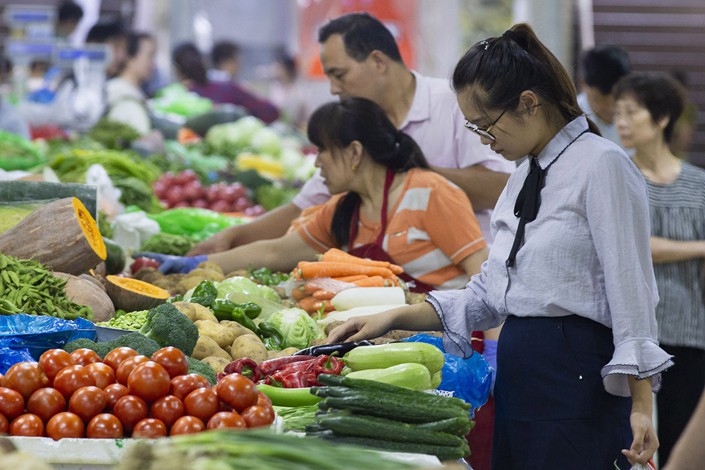 * Consumer price index year-on-year increase of 2.3% in August is highest since February

The consumer price index (CPI), which measures the prices of consumer goods and services, rose 2.3% year-on-year in August, according to the National Bureau of Statistics (NBS). The reading was the highest since February, when the weeklong Spring Festival took place. Food prices typically rise during the holiday as Chinese indulge on larger and often-pricier meals.

Growth in nonfood prices accounted for a large proportion, or 1.98 percentage points, of year-on-year headline consumer inflation in August, with gasoline and diesel prices rising 19.8% and 22% year-on-year respectively, according to the NBS.

On a monthly basis, the CPI rose 0.7% in August, the fastest pace since February, NBS data showed.

Food prices rose 2.4% month-on-month in August, contributing 0.46 percentage points to monthly CPI growth. Vegetable and pork prices both rose faster on a monthly basis in August than July, as hot and rainy weather, plus an outbreak of swine fever, led to tight supplies, according to the NBS.

The rise in pork prices should continue over the medium term, while feed prices may be pushed up by the higher Chinese tariffs on U.S. soybeans, which in turn puts more upward pressure on pork prices, said David Qu, an analyst at ANZ bank.

The recovery in the prices of food and consumer goods, which used to be the items that dragged on headline CPI, may help the index continue its rise into the next few months, Qu said in a note.

However, HSBC Global Research analyst Julia Wang holds a different view. Food prices have generally been in a downtrend so far this year, so the supply-side shocks from bad weather and swine fever won’t have a sustained impact on food prices or overall inflation, she said in a note.

The producer price index (PPI), which tracks the prices of goods circulated among manufacturers and mining companies, increased 4.1% year-on-year in August, slipping from 4.6% in July, NBS data showed. The effect of a low comparison base in the same month last year contributed 3 percentage points to factory inflation.

On a monthly basis, PPI growth edged up to 0.4% in August from July’s 0.1%, NBS data showed. This was largely due to a further rise in steel and oil prices, said Julian Evans-Pritchard, an economist with research firm Capital Economics, in a note.

China’s ongoing environmental inspections across the country, part of the government’s campaign against pollution, have also pushed up raw material prices. This factor will likely continue to support producer prices in the near term, Wang said.

With the ongoing growth slowdown, market participants have become worried that China could become mired in a kind of stagflation, with rising inflation risk constraining Beijing’s ability to ease monetary policy, Nomura analysts said in a note.

However, “with broad price pressures still relatively subdued, it’s still too soon to sound the alarm on inflation,” Evans-Pritchard said.