Stage Set for Clash Over China’s Subsidies for State Firms 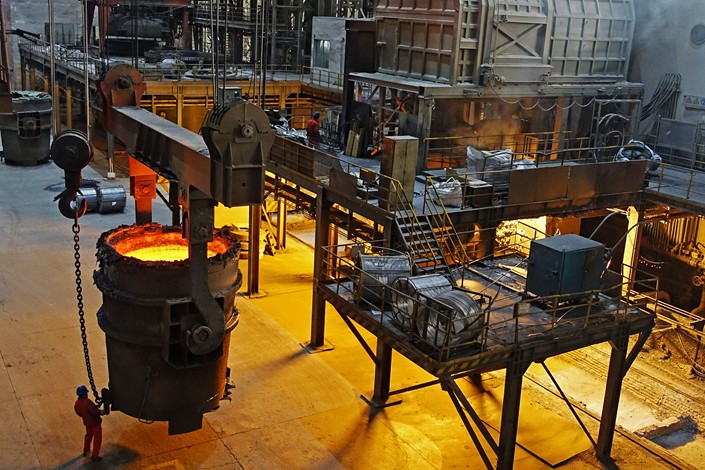 China could be heading for a showdown with some of the world’s biggest economies next month over its treatment of state-owned enterprises (SOEs) as pressure grows for new international rules to make sure private companies are competing on a level playing field.

Foreign governments have become increasingly vocal in their criticism of China’s support for its state sector in recent years, particularly over the alleged “dumping” of excess steel and aluminum production by companies propped up by state subsidies.

On Friday, the Business 20 (B-20), a leading business group that advises the Group of 20 (G-20) meeting of leaders from the world’s top economies, called on G-20 member countries to work together to establish “measures that ensure that state-owned enterprises do not have privileged access to noncommercial assistance in order to allow for a level playing field for investment and trade.” It also recommended at their annual meeting in Argentina at the end of November that they “recognize the principle of competitive neutrality.”

While Chinese business groups reportedly lobbied against the recommendations, Chinese officials themselves began using the term “competitive neutrality” in the following days. Yi Gang, the governor of the People’s Bank of China, said on the sidelines of the International Monetary Fund’s meetings in Bali on Sunday that China is considering adopting the principle of competitive neutrality to create a level playing field between state-owned enterprises and private companies.

A day later, Peng Huagang, deputy head of the State-owned Assets Supervision and Administration Commission (SASAC), hit back at the B-20 communiqué during a news conference, saying it “neglected that state-owned enterprises have fully integrated into the market.” Along with competitive neutrality, China also advocates “neutrality of ownership,” and “opposes discriminatory treatment of state-owned enterprises in the formulation of international rules,” he said.

Competitive neutrality was originally conceived in Australia during the 1990s as a concept to ensure private companies receive equal treatment with state entities when bidding on contracts. Yet China’s use of the term appears to demonstrate Beijing’s efforts to be seen to respect fair treatment, said Jeremy Stevens, a Beijing-based economist at South Africa’s Standard Bank.

“Words used by this level of leadership is never an accident,” he said. “The phrase just captures the anxiety at this juncture. Beijing has spent considerable time trying to balance the interests of SOEs and private firms in this new normal (of slowing growth). How to aid SOEs during a time when the old growth model — to which most of them are attached — is slowing and traditional policy levers are having less marginal impact is one of its main challenges.”

The B-20 communiqué and SASAC’s response “sets the stage for a showdown” over China’s support for SOEs at the G-20 meeting, said Harish Natarajan, head economist at risk consultancy AKE International. “The Trump administration’s tough stance on China, coupled with concerns over the Belt and Road Initiative saddling developing countries with high levels of debt, and Chinese SOEs ability to muscle in on deals that private companies can’t afford has led to an atmosphere of rising concern, of which the B-20’s communiqué is an expression,” he said.

Peng’s words came in response to a reporter’s question at a news conference mostly devoted to the strong performance of the state sector, as the profits of the top 100 SOEs under the SASAC rose 21.5% year-on-year in the first nine months of 2018 to 1.35 trillion yuan ($195 billion).

China’s government subsidies have been a bugbear at the G-20 for some time. In April, several aluminum industry groups representing Brazil, Canada, Europe, Japan and Mexico drafted a letter urging the G-20 to take action against China’s industrial support. The letter said that measures taken so far have been “insufficient to tackle the abundant overcapacities” and pointed out that the actual increase in Chinese production in 2017 amounted to 13.3% compared with 2% in the rest of the world.

At last year’s meeting, China and the U.S. also clashed over steel, with the German government reporting in May that Chancellor Angela Merkel would discuss steel with Chinese President Xi Jinping.

There are also concerns about Chinese SOEs’ investments abroad, with state-backed companies facing increasingly tough foreign investment regimes, said Nicholas Song, a specialist in advising Chinese SOEs on cross-border mergers and acquisitions and investments with law firm Dechert. “One of the main challenges is the perception that just because an SOE is owned by the government, it works in tandem with all others and that revenues count the same,” he said.

Tougher rules are one reason that analysts have given for China’s first annual drop in outbound direct investment, which fell 19.3% last year after hitting a record of $196.15 billion in 2016.

Although Germany has also been accommodating of Chinese investment, in July 2017 Berlin increased its scope for investigating and blocking foreign acquisitions to include giving up technological know-how and access to “critical infrastructure” as part of potential national security threats.

Concerns over SOEs’ state support appear to be widely held across Washington’s security community. “Government support enables Chinese SOEs to offer products far below market prices, shutting out foreign firms particularly small and medium-sized foreign firms — from designated sectors,” said a research report from the U.S.-China Economic and Security Review Commission in May. “As a result, the global competitive landscape could quickly become dominated by a shrinking number of firms,” it added.

Beijing continues to tout SOE reform as a key objective, promoting innovations such as allowing private companies to enter into strategic alliances with the state-owned sector. Yet while Peng also spoke several times of the importance of reforms without providing specifics, he also spoke of strengthening the Communist Party’s role in their management, saying: “In the next step, SASAC and the central SOEs will be more closely united around the Party Central Committee with Comrade Xi Jinping as the core.” It is a message likely to be interpreted as being at odds with the claims of them being market-led.

The government is also keen to merge existing SOEs into even larger “national champions” that are better able to compete on the international stage. For example, it plans to consolidate the steel industry so that 60% of the country’s capacity in the hands of its 10 largest steelmakers by the end of the decade.

It’s another move that might further unnerve other countries. “The national champions plan sends mixed messages about Beijing’s commitment to SOE reform and will likely be a sticking point at the G-20 next month,” AKE’s Natarajan said.