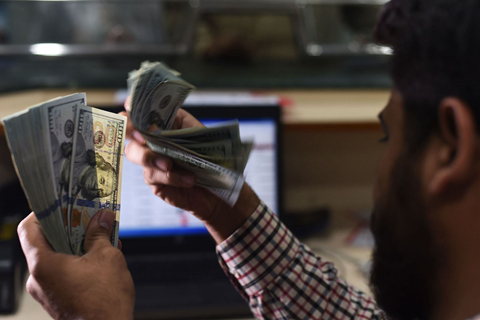 Nearly four months have passed since the U.S. fired the opening trade salvo on July 6, slapping tariffs on $34 billion of Chinese imports and unleashing a trade war that many analysts believe is unlikely to conclude any time soon. Ongoing trade tensions are weighing on investor sentiment across the world’s economies and contributed to China recording its slowest quarter of growth since 2009 in the third quarter this year.

How should China respond to continued U.S. economic pressure at this juncture, and what options does it have at its disposal? Fan Gang, the director of China’s influential National Economic Research Institute, said that China should not let the spat move outside the confines of trade policy, and should not be tempted by calls to open new fronts in financial relations or “harass” the operations of U.S. companies in retaliation.

“So far I think that China’s response is still very reasonable and restrained,” Fan Gang said in a recent lecture on the topic. So far, China has not gone to any extremes or taken on board any bad ideas in its responses, he added.

China cannot match the U.S. by simply expanding the range of goods subject to tariffs because U.S. exports to China are much lower than China’s shipments to the U.S., he noted. Nevertheless, China must also avoid the “mistaken idea” that China should sell a portion of the U.S. Treasury securities it owns.

“This would open up a new front and transform the trade war into a financial war,” Fan warned. “But China’s finances are very fragile at present, while the U.S. financial market is huge. The more than $1 trillion of U.S. debt that China holds does not actually constitute a major proportion of the U.S.’s total debt. And once China sells that debt, there is nothing better for it to buy” with the U.S. dollar it would receive.

“On top of that, the move would have a very uncertain effect on the renminbi’s exchange rate,” he added.

Another bad idea that has been suggested is to use non-tariff barriers -- such as delays in license approvals or increased inspections of operations -- to make problems for U.S. companies operating in China, Fan said. But U.S. President Donald Trump is only too eager to encourage China to do this, as it would strengthen his argument that U.S. companies doing business in China are not treated fairly.

American companies working in China are an integral part of the Chinese economy. They are also the most likely to speak up for China in the U.S. because they want to maintain a healthy economic relationship between the world’s two largest economies. If China tries to disrupt American companies by impairing their movement of goods or implementing policies that interfere with their operations, it will simply drive the US companies out of China, Fan warned.

This would also be counterproductive because Trump and many Americans will gauge success in the trade war precisely by “the number of companies returning to the U.S. [and] how much employment is being created there” as a result.

In response to U.S. trade measures, China should continue to fight solely in the trade sphere, Fan stressed. It could impose additional tariffs on U.S. products or impose a higher tax rate for U.S. goods based on U.S. rates, or some other method of taxation.

But China could do something even better, Fan argued.

“Fundamentally [China] could levy more, but it should not, and thereby show it is a taking the high road. Rather than going all out with the U.S., we should demonstrate our goodwill. We can’t suffer much harm this way, and it will be beneficial for us in the long run.”

Fan believes China’s most important strategy is to a continue its reforms and to create a strong and level playing field for business. “As long as we don’t open up new areas of conflict, China will retain the moral high ground,” he said.

China should also consider that the Trump administration’s trade policies are not just aimed at China, but are part of a larger U.S. move to withdraw from a multilateral approach to global issues. This means China can create a united front with other like-minded countries and work with them to give voice to the international system, Fan said.

As an example of united action, Fan Gang’s cited this week’s move by China, the European Union, Norway and several other countries to file a complaint at the World Trade Organization, asking it to investigate the U.S. decision to impose tariffs on steel and aluminum imports in March.

In Fan Gang’s view, those in China who argue against making any concessions in the trade war are making a mistake, because in a competitive market, you have to consider the interests of others as well as your own.

“In the past, we were very weak and needed protection. But as we have gradually become stronger, our market protections should at least be reduced to a reasonable degree. But when you use non-market methods to protect your industries and enterprises, and you don’t pay a price in one area [because of that protection], you will pay it elsewhere. Other countries can use the same means to sanction you, as happened to ZTE.”

“Often people complain that relaxing these rules and allowing for an equal market would ‘sell out’ the country,” he said. “But maybe not making these changes would be the surest way to harm China, as this way would eventually drag everyone down and we will be unable to sell anything.”

Editor’s note: This article has been translated and adapted from the original piece in Chinese.