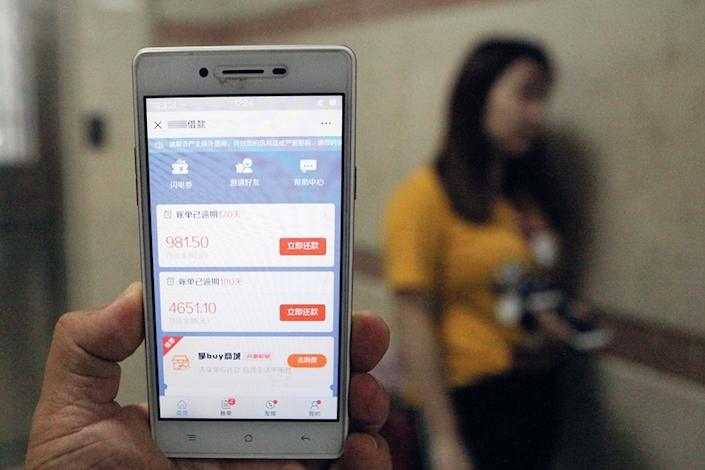 For decades, the Chinese people have been known for thrift and persistent saving habits, which analysts see as a significant contributor to the country’s prosperity. But now, the situation is changing.

Economists and officials this year have repeatedly warned against a rapid buildup of household debt, fueled partly by a boom of internet financial platforms that provide easy access to credit for people left out of the traditional bank lending system.

For example, 29-year-old Li Ming said he has borrowed nearly 300,000 yuan ($43,295) through consumer loan products issued by banks and microlending platforms since late 2017.

Li said he put the borrowed money into virtual currency investments, which are suffering narrowing gains because of recent volatility. With 4,000 yuan of monthly income from his job at an internet media company, he faces mounting repayment pressures.

“It was OK to repay 10,000 yuan every month, but it will soon rise to 50,000 yuan with principal payment, and it will be difficult to afford,” Li told Caixin.

This kind of borrowing has spurred a surge in outstanding consumer debt since 2015 to more than 15 trillion yuan ($2.16 trillion) today, according to estimates by market analysts. That includes short-term, small amounts of credit obtained by individuals from banks, credit cards, financial companies and online lending platforms to fund family spending such as vehicles and holidays.

Including mortgage lending, Chinese household borrowing reached 35.6 trillion yuan as of August, according to the central bank. That total relative to China’s GDP was more than double the ratio in 2011.

A study by the National Institute for Finance and Development (NIFD) found that the total of all Chinese household debt reached 51% of GDP in the second quarter this year, up from 49% at the end of 2017. Although the ratio is lower than that of wealthier countries such as the United States and Japan, it is rising quickly.

The International Monetary Fund forecast that China’s household debt-to-GDP ratio, a commonly used measurement of household leverage, will keep growing by 2 percentage points annually to reach 61.3% by 2023, while the country’s household savings-to-GDP ratio will decline to 30.5% in five years from 35.5% at the end of last year.

If measured by comparing household debt with disposable income, Chinese families’ indebtedness reached 87% by the end of 2017, close to the 100% ratio of the U.S. and Japan, according to Zhang Ming, chief economist of Ping An Securities.

The rapid buildup of household debt has sparked fears that potential default risks will put pressure on lenders and hurt the country’s long-term consumption growth.

Fueling such concerns is the widening gap between growth of debt and consumption. Official data showed that in June, consumer loans increased 21% from the same time last year, while the expansion of national retail sales slowed to a 15-year-low of 9.4%.

“Surprisingly, the rapid expansion of consumer loans hasn’t accompanied an equivalent increase in household consumption. … It means the credits were not used in consumption,” Fujian-based brokerage Industrial Securities said in a report.

Zhao Le, 35, works in the financial industry and is also a frequent consumer borrower. He has borrowed 1 million yuan in consumer loans from two banks.

Zhao poured the 1 million yuan he borrowed into stock markets. Although the recent market rout has caused him losses, Zhao is still investing aggressively.

“I can borrow new loans to repay the old ones and things will be better when the stock market revives,” he said.

Li and Zhao are part of China’s younger generation of consumers, who are more apt to borrow than their elders. Market analysts believe that people between the ages of 22 and 55 are the main customers of consumer loans.

“Young people have advanced consumption awareness and demands but are at the beginning of their career development. The gap between their demands and affordability creates the needs for consumer loans,” according to a recent report by market research institution Evergrande Institute.

Chinese consumers’ borrowing spree is fueled by the boom of online financial service platforms such as peer-to-peer lending sites, which collect money from retail investors and issue small loans to consumers without collateral. Borrowing can be extremely easy as platforms compete to expand their user bases. Sometimes, loans can be secured by a simple click on a mobile phone.

But some analysts warned that whether the money is used to support borrowers’ actual consumption should be scrutinized.

“There is marketing for loans everywhere,” said Wang Yifeng, the research head of China Minsheng Bank’s financial development institute. “Will it lead to irrational borrowing of the young people? Do they really need to borrow and where do they spend the money?”

“Existing mortgage and auto-loan products issued by banks have covered most of the biggest parts of household spending,” the executive said. “What are the huge amount of consumer loans spent for?”

A regulatory crackdown since last year on online financial irregularities found that some investors used consumer loans to invest in stock and other markets ― like Li and Zhao ― and properties to skirt borrowing rules.

“Since 2015, those who were unable to afford housing” got into the market with consumer loan borrowing, Lu said.

“Consumer finance can be easily stimulated by over-marketing,” said Liu Chengqing, director of the Chinese Academy of Financial Inclusion. “China is counting on consumption to drive the economic growth, but relying on overspending by low-income groups could be dangerous.”

Where does the money come from?

Despite the booming internet finance and microlending sectors, commercial banks are still the biggest funding sources for consumer loans. Data from the NIFD showed that by the end of June, banks had 7.6 trillion yuan of outstanding short-term consumer loans, up 30.3% from the same time last year and outpacing growth of all other types of bank lending.

As the central government pushed to cut corporate debt, households have increasingly become the major recipients of new credit in China’s banking system. Banks have stepped up efforts to compete for new consumer loan customers to support growth.

According to BOC International (China) Ltd., commercial lenders’ loans to individual customers rose 8.1% in the first half this year from the previous six months, outpacing corporate loan growth by nearly 3 percentage points.

It will take time for bad loans to emerge, but profits are immediate, a banking industry analyst said. “Bank executives have been aware of the risks (of fast-expanding consumer loans,) but if you don’t do (the business), you will lag behind rivals,” the analyst said.

Most commercial banks market consumer loans mainly to their own credit-card holders, as the easiest way to control the quality of borrowers. But some analysts have warned of rising danger of credit-card defaults after years of freewheeling expansion.

Central bank data showed that outstanding loans to Chinese credit-card holders have surged from 0.25 trillion yuan in 2009 to 6.26 trillion yuan by the end of June, with an annual growth rate of more than 50%.

Meanwhile, the increase in borrowing sources allows Chinese consumers to repay their loans with new borrowing from other platforms, causing risk of contagion, analysts said. And the lack of credit data on consumers makes default risks even harder to monitor.

Is the China version of a subprime crisis approaching?

“There hasn’t been any major risk exposed in the consumer loan sector, but it doesn’t mean risks are not accumulating,” a bank manager said.

“The fast growth of consumer credit will hide risks and delay the burst of bubbles,” he said.

“I am worried that the consumer loan industry will turn to a subprime debt crisis,” the executive said.

According to a recent customer survey by internet finance company Rong360, 50% of consumer loan borrowers’ monthly incomes are less than 5,000 yuan. Thirty percent of respondents said they are taking out new loans to repay old ones while 5% said they are unable to afford repayment.

Authorities have shown concern about the buildup of household debt. Since the beginning of this year, financial regulators have made repeated efforts to rein in household leverage and launched a crackdown on using consumer loans to invest in stock and property markets.

In a recent report, economists at Shanghai University of Finance and Economics said it is time for Chinese authorities to warn households of excessive leverage while using taxation measures to improve household liquidity and encourage consumption.