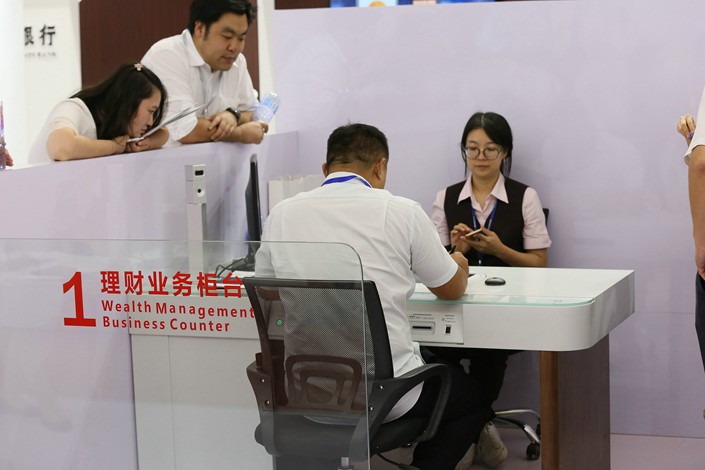 As of the end of last year, Chinese banks had a net total of $170 billion invested in stocks. Photo: VCG

The China Banking and Insurance Regulatory Commission (CBIRC) released draft regulations (link in Chinese) for these subsidiaries Friday, implying that they can invest in stocks. The CBIRC released the draft the day after the country’s benchmark stock index fell below 2,500.

The CBIRC’s regulations, open to public comment until Nov. 18, fill in some of the blanks left in regulations that the People’s Bank of China (PBOC), the country’s central bank, announced on April 27. The PBOC’s regulations instructed banks to set up independent subsidiaries by 2020 to handle the investment of money raised from clients through wealth management products. In a Friday news release (link in Chinese), the CBIRC said that this requirement is not mandatory.

Several banking industry insiders told Caixin that the rule change won’t result in much extra money flowing into the stock market because banks don’t have that many staff with expertise in investing in shares.

Traditionally, banks haven’t invested much in the stock markets. As of the end of last year, banks had a net total of 1.2 trillion yuan ($170 billion) invested in stocks, equivalent to roughly 2.6% of the total market capitalization of the Shenzhen and Shanghai stock exchanges, a person close to the regulator told Caixin.

Banks have also been reluctant to set up these subsidiaries. Of the 27 commercial banks in China with the proper qualifications, only 14 have announced they will set up wealth management subsidiaries. Of the country’s five largest banks, only one — Bank of Communications — has done so.

The big banks are concerned that their control over capital and influence might be weakened if they spin off their wealth management business to a subsidiary, said one director of a bank’s asset management department.