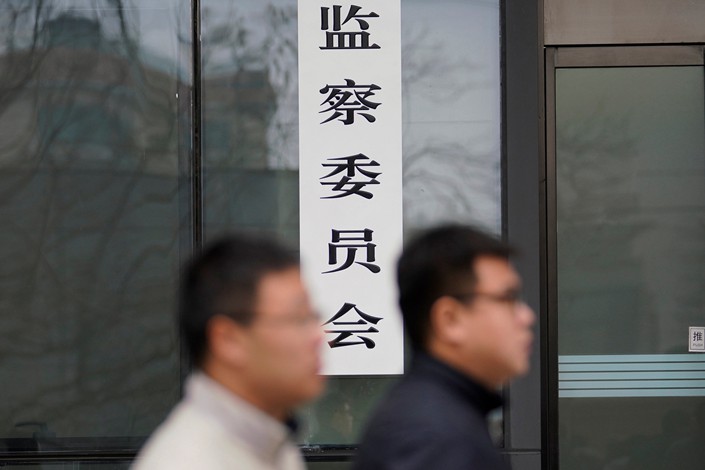 A sign of the Beijing Municipal Supervisory Commission is seen in Beijing on Feb. 27. Photo: VCG

Legislators have called for empowering public prosecutors to have the right to exercise oversight not just over the police and courts, but also over a powerful new anti-graft investigator.

The Standing Committee of the National People’s Congress (NPC) started to deliberate the third draft of an amended bill on law-enforcement procedures on Monday. At the session’s Tuesday hearing, some lawmakers suggested that if workers of the National Supervisory Commission (NSC) or its local branches committed crimes such as abusing suspects during their corruption investigations, then prosecutors should be allowed to investigate them.

Previous drafts of the amended Criminal Procedure Law read by national legislators have caused a stir inside and outside China, with the power to detain suspects under investigation and new procedures for trials held in absentia arousing particular attention.

Crucially, however, the amendments have not addressed whether the law will apply to the National Supervisory Commission, an anti-corruption investigative body with a broad mandate.

The NSC was officially established in March with a constitutional amendment and an accompanying Supervision Law, which stipulates that the commission can investigate suspected crimes of corruption and bribery, abuse of power, dereliction of duty, fraud for personal gain and waste of state assets, among other things. Unlike the Communist Party’s in-house anti-graft watchdog, all public employees can be investigated by the commission — both party members and nonmembers, and possibly even employees of state-owned enterprises.

Many have expressed concern, even since early pilot programs of the commission, that its broad scope would make it hard for its agents to be held accountable by China’s judicial system.

The first draft of the Criminal Procedure Law deleted provisions on the role of the procuratorate — a body with a role similar to that of a public prosecutor — in investigations into corruption and bribery, while making it clear that “crimes such as illegal detention, extortion of confession by torture, illegal search and other crimes that infringe on civil rights and impair judicial justice committed by judicial personnel using their powers may be investigated by the procuratorate.”

However it remains unclear if supervisory commission employees count as “judicial personnel.”

In May, a former government contract worker died while in the custody of a local supervisory commission in Fujian province. After viewing his body, his wife and sister said that his face was contorted and he was covered in bruises, raising questions over the legal protections for those detained by the commission.

Under the current Supervision Law, those detained are denied access to lawyers, leaving them vulnerable to mistreatment. According to the worker’s sister, the local branch of the commission admitted negligence, but rejected requests for video recordings of his interrogation. Under the current draft amendments to the Criminal Procedure Law, it is not clear that the procuratorate would be able to investigate in similar situations.

NPC Standing Committee member Lü Caixia said on Tuesday that there is still debate over whether Supervisory Commission investigators are judicial personnel. She suggested that the subject of the clause should also include “investigators.”

Ren Qianli, an NPC representative and a doctor at the Huaibei People’s Hospital in Anhui province, agreed. Ren, who attended the Standing Committee meeting, said many NPC delegates suggested adding “supervisory personnel” after “judicial personnel.” He told Caixin, “I too believe that the work of Supervision Commission officials should have some stronger supervision, in order to protect the rights of all public employees.”

Many have also been wary of the addition of the trial in absentia procedure in the amended Criminal Procedure Law. The first draft of the revised rules stipulates that trials of corrupt officials who have fled the country can be conducted in absentia, causing concerns about human rights protections. Since the first draft, the types of cases that can be tried in absentia were expanded to include cases of serious crimes against national security and terrorist activities.

A professor at Sichuan University’s School of Law, Long Zongzhi, told Caixin earlier that he is concerned about the establishment of a system of trials conducted in absentia. Long believes that this system prioritizes efficiency and could conflict with the need to protect the rights of the accused. Under this system, it would be easy for situations to arise in which law enforcement power is unrestricted (link in Chinese).