U.S. Threat to Retreat From Postal Union to Have Minimal Impact on China, Analysts Say 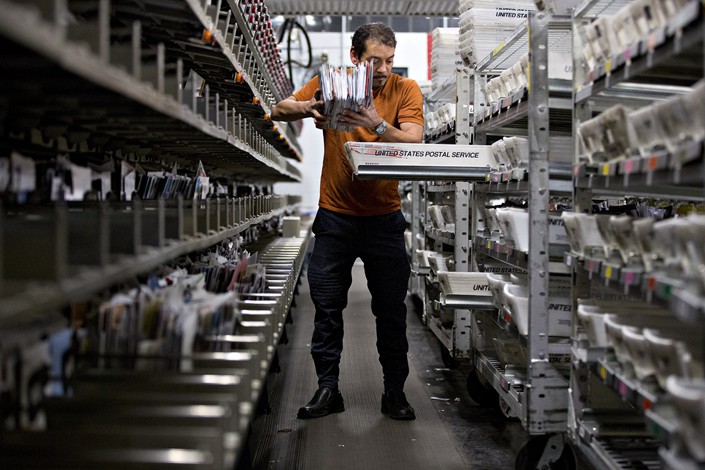 A worker sorts mail at a U.S. Postal Service processing and distribution center in Maryland on Dec. 19. Photo: VCG

Over the years, the rise of e-commerce platforms has provided opportunities for merchants in China to sell their products all over the world.

For the six months through June, China’s cross-border transactions rose 25% to a staggering 4.5 trillion yuan ($648.4 billion), according to the Electronic Commerce Research Center, a consultancy.

The market, however, has steeled itself for a potential hit as the U.S. government last week announced that it is considering pulling out of the Universal Postal Union (UPU) by no later than January 2020.

The 144-year-old postal treaty has long allowed Chinese companies to ship smaller packages to overseas markets at discounted rates. For example, the stated-owned China Post only pays about $5 for a 4.4-pound package — the maximum weight covered by the UPU — to the U.S. In comparison, American companies have to pay rates of between $19 and $23 to ship a similarly sized package within their country.

“If the U.S. were to set its own ‘terminal dues’ for mailed packages from China, that would significantly raise logistics costs for many Chinese merchants targeting the U.S. market,” wrote Song Wei, a researcher at Commercial Bank of China in a commentary for Caixin (link in Chinese). Wei said the postage has been a popular choice among Chinese merchants that send goods into the U.S. It is also their cheapest option.

Smaller merchants or e-commerce platforms are most likely to take the hit, as they would find it difficult to change to other logistics services such as private delivery companies, which charge more, said an industry executive who declined to be named.

A potential rise in postal fees from the U.S. withdrawal is expected to prompt Chinese companies to ramp up efforts to build domestic warehouses at their shipping destinations, said a representative of DHgate.com, a China-based cross-border business-to-business e-commerce site.

Domestic warehouses have long been used by Chinese sellers for logistics purposes, a China office’s representative of U.S. online retailer eBay Inc. told Caixin. A previous eBay investor relations document showed that nearly half of the platform’s merchants have built up their own local warehouses in the U.S.

These logistics alternatives mean that the U.S. threat would have limited impact on China’s overall cross-border business.

Also, an executive from China Post told Caixin that although the U.S. remains the largest market for China Post, which reported 53 billion yuan in revenue from international postal services last year, the country isn’t as important as it once was due to rising demand from other parts of the world.

AliExpress, the cross-border business of China’s e-commerce giant Alibaba Group Holdings Ltd., has also recently began to expand into markets other than the U.S.

Last month, Alibaba teamed up with its Russian partners, including local peer Mail.ru, to establish a joint venture in the country, which is already one of the biggest markets for AliExpress.