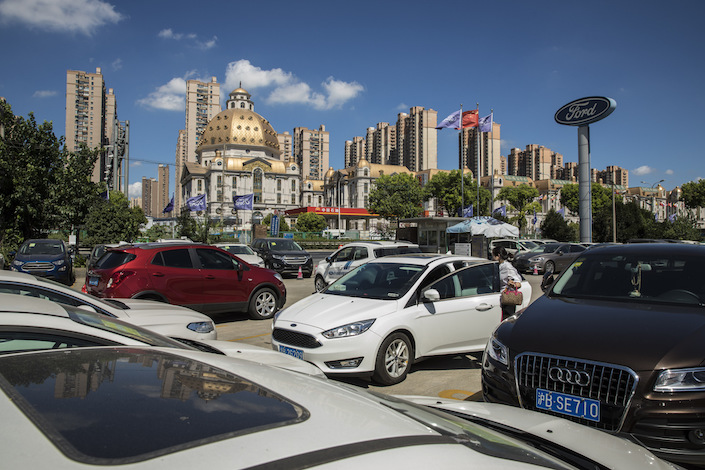 (Bloomberg) — China is considering a tax cut to revive its flagging automotive market, according to people familiar with the matter, lending support to a key industry that’s been damaged by an ongoing trade war with the U.S.

Carmaker shares surged after Bloomberg News reported the proposal, which would stimulate a market they’ve increasingly relied on for growth. Among Chinese carmakers, Great Wall Motor Co. jumped as much as 6.9%, Geely Automobile Holdings Ltd. gained as much as 6%, and Guangzhou Automobile Group Co. rose as much as 4.4% in Hong Kong Tuesday.

The move would help shore up the world’s largest automotive market, which is facing its first decline in more than two decades as a trade war with the U.S. hits at consumer spending power. A torrid few months of escalating countermeasures have led Volkswagen, Ford and Renault SA to all cut their outlooks, as sales in the country slid for four straight months. Tensions with the U.S. have started to ripple more broadly through China’s economy and its stock market, showing a more direct impact than on the U.S.

To counteract the slowdown, China’s top economic planning body is proposing to halve the tax on car purchases to 5%. The measure would apply to cars with engines no bigger than 1.6 liters, said the people, declining to be named because the information isn’t public. China’s National Development and Reform Commission, also the top regulator, has submitted a plan but no decision has been made, they said.

“This is definitely good news and a message the market has been waiting for,” said Juergen Pieper, a Frankfurt-based analyst with Bankhaus Metzler.

China made a similar cut to the car-purchase tax in September 2015. If stimulus is announced in the coming weeks, the 2015 experience suggests expectations for 2019 industry sales could be revised higher by as much as 2 million to 2.5 million units, or as much as 10%, Sanford C. Bernstein & Co. analysts including Robin Zhu wrote in a note dated Monday. This would mean “mid-single digit growth” next year compared with current expectations for a “modest decline,” they wrote.

Ford climbed as much as 6.8% on Monday, buoyed both by the China news and a Goldman Sachs analyst upgrading the stock to a buy. The company’s China sales have declined in 14 of the past 15 months. GM rallied as much 5.1%.

The NDRC didn’t immediately respond to a fax seeking comment. Cars of that engine size accounted for some 70% of the total number of passenger vehicles sold last year, according to the China Association of Automobile Manufacturers.

Chinese car sales are on track for their first annual drop in two decades, after racking up growth records as an emerging middle class bought their first cars. The slowdown in China is just one of the challenges facing an industry that’s also grappling with tougher emissions tests and the rise of the electric car. Daimler, the world’s biggest luxury-car maker, has lost a almost quarter of its value this year. Shares in French supplier Valeo SA are down by almost 60%.

Last week, Volkswagen warned that the trade tensions with the U.S. are dragging on the market, prompting the German manufacturer to cut its forecast for industry sales in China. The company had forecast a 4% expansion this year in the country, but recent data show the market to be flat or even lower for the year, it said.

As part of the economic standoff with the U.S., China increased the levy on vehicles imported from America to 40%. The country almost simultaneously lowered the duty on other imported cars to 15%, leaving consumers confused about pricing and potentially lowering demand, according to the the China Passenger Car Association.

Should the tax-cut plan go ahead, it would be the latest effort by China to support the $12 trillion economy, which has slowed this year amid the ongoing trade friction. In recent weeks, policymakers have tried to calm ructions in the stock market and acted to bolster private businesses by supporting bond issuance. Banks’ reserve-requirement ratios have been cut four times this year as a way of encouraging them to lend.

Passenger-car purchases by dealerships declined 13% to 1.9 million units in September, according to the passenger car association. For the first nine months of this year, deliveries declined 1.1%.

As the trade tensions take their toll, U.S. President Donald Trump and Chinese counterpart Xi Jinping had agreed to meet on the sidelines of the next month’s Group of 20 leaders in Buenos Aires. With the talks still in the planning stages, the White House is considering excluding trade from the agenda of the pair until Beijing shows it’s serious about addressing the U.S.’s list of negotiating demands.