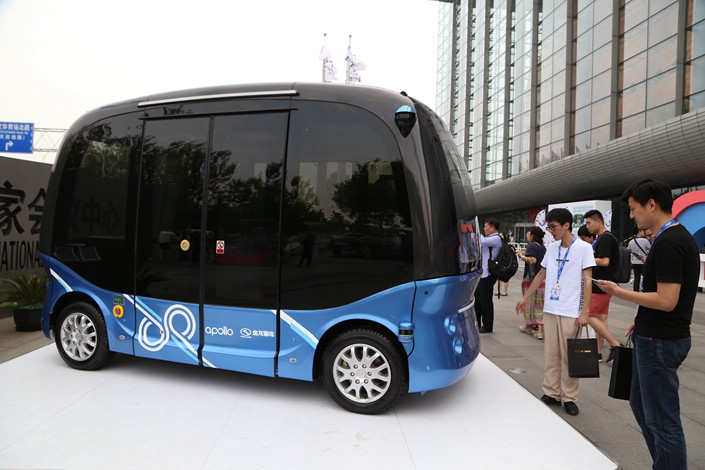 Search giant Baidu Inc. is ready to test its first batch of self-driving taxis in Central China’s Hunan province, as it races toward commercializing autonomous technology — the next big thing in the tech world.

A fleet of self-driving cabs, or “robo-taxis,” will soon be tested in a pilot zone in the provincial capital of Changsha, and will open to the public for rides in the future, the company announced after signing an agreement with the city government on Monday.

The statement (link in Chinese) didn’t name the manufacturer of the taxis or when the public rides will be officially launched.

The trial cabs will still need a safety driver on board, and Baidu said it plans to expand the fleet to about 100 vehicles next year.

The move is the latest for Baidu, one of China’s aggressive tech pursuers of autonomous-car solutions, to play catch-up with global peers, such as Google LLC’s parent Alphabet Inc., which commercialized driverless services in the U.S. earlier this year.

Baidu dabbled into driverless technology in 2013 after its main revenue source of online advertising took a downturn. It opened up its proprietary platform, Apollo, early last year for third parties. More than 100 partners have joined its platform to develop autonomous cars, including luxury-auto maker BMW.

Early this year, Beijing rolled out a national policy that allows companies to test their driverless cars in the country’s public road. This came after years of lobbying by industry executives, who argued that strict regulations would hinder the sector’s development.

Still, the policy stipulates that the tested cars will need a safety driver on board, making China less open than the U.S., where some states, including California, have allowed testing without drivers.

In Changsha, Baidu said the local government will provide much-needed infrastructure support for its robo-taxi project, such as connecting its car fleet to a cloud-based transportation system to help it better navigate traffic.

Other technology rivals, such as Alibaba Group Holding Ltd. and Tencent Holdings Ltd., have also recently ramped up effort into the fledgling sector. In April, Tencent set up an autonomous vehicle joint venture with state-owned Chongqing Changan Automobile Co. Ltd.

Earlier this month, Beijing-based self-driving solutions provider Momenta said it netted an undisclosed amount of funding, making it the country’s first startup in the sector with a valuation of over $1 billion.