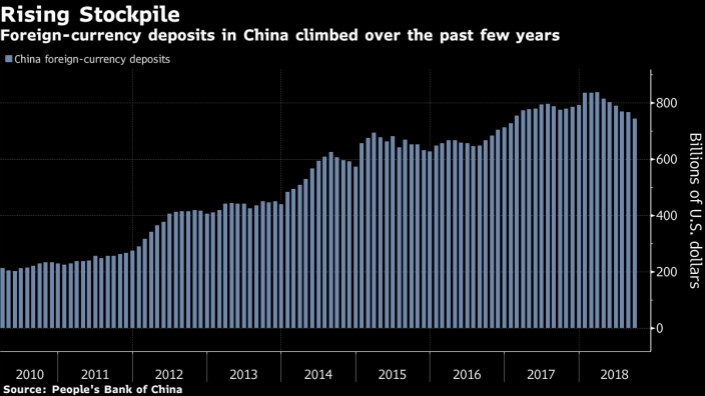 (Bloomberg) — China plans to deepen its foreign-exchange markets to encourage both domestic and overseas players to trade and borrow external currencies more onshore, in the latest step toward fostering a global role for its financial system.

The China Foreign Exchange Trade System, an arm of the central bank, plans to develop swaps involving overseas currencies —
such as between the euro and the dollar — and foreign-exchange interest-rate swaps, among other steps detailed in emailed responses to questions posed by Bloomberg. CFETS also aims to build reference rates in onshore markets for dollar borrowing across the maturity spectrum. That could encourage companies to seek dollar funding at home rather than overseas, tapping the pool of U.S. currency held in China.

While China has kept tight controls on outflows of capital, it has steadily opened its domestic markets to overseas investors, including the use of yuan-denominated oil futures, which were introduced in Shanghai earlier this year. In currency trading, Tokyo and Singapore have long dominated volumes in the Asian time zone, even as China grew to become the region’s top economy and the world’s biggest trading nation.

“Developing the foreign-currency market onshore will facilitate cross-border capital flows, and put China one step closer to a complete opening-up of the capital account,” said MK Tang, a senior China economist at Goldman Sachs Group Inc. in Hong Kong. The moves could make it easier for Chinese companies to borrow in foreign currencies, and foster the internationalization of the yuan, he said.

Foreign-currency borrowing stood at $36 billion, measured by daily average transaction volume, for the first nine months of this year —
up 47% from the same period last year, CFETS said. Domestic Chinese institutions have amassed hundreds of billions of dollars worth of foreign exchange, care of deposits by companies and households and the issuance of foreign-currency bonds.

While China effectively slowed its campaign to internationalize the yuan in the wake of a devaluation in 2015 that spooked global investors, it has deepened links to overseas markets more recently. One such step came last year with the Bond Connect, which lets foreign traders buy Chinese fixed income via Hong Kong — mirroring the two stock-trading links that have been set up with the city since 2014.

The latest plans come even after the yuan tumbled about 9% against the dollar over the past six months. The plans for benchmark borrowing costs in dollars follow China’s second issuance of sovereign bonds in the U.S. currency in a year, in face of a worsening trade war with the U.S.

Here are further observations and comments from CFETS in its emailed response to questions:

The plans meet market participants’ needs and complement the development of the yuan market. Onshore dollar interbank borrowing costs tend to be higher than those in the offshore market. CFETS will seek to expand the pool of collateral used for foreign-currency borrowing onshore, introduce third-party repurchases for the same.