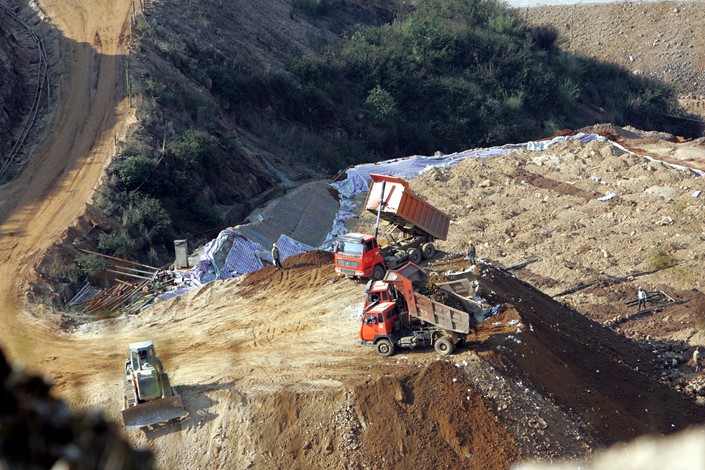 A mining site for rare earth metals is seen in Baotou, the Inner Mongolia autonomous region, on March 18. Photo: VCG

China has launched another crackdown on the country’s rampant smuggling and illegal production of rare earths, as authorities try to get a better grip on an underground industrial chain that has hamstrung their efforts to set world prices.

The Ministry of Industry and Information Technology (MIIT) said a one-month special inspection was launched on Tuesday, aiming to stamp out illegal mining, excess production, environmental violations and smuggling of rare earths, according to the state-controlled China Securities Journal. The notice also called on the media to help report wrongdoers and expose crimes.

Sometimes dubbed “Industrial MSG” in China — referring to the flavor intensifier monosodium glutamate common in Chinese cuisine — rare earth metals are a group of 17 elements used in smartphones, wind turbines, hybrid-car batteries, and many other high-tech products. China is responsible for 90% of global production, according to the Ministry of Commerce, and this virtual monopoly has caused concern in the U.S. and Japan, both major importers of the metals.

China supplied 78% of U.S. imports of rare earth metals in 2017, according to Trade Map data. The U.S. is sensitive to this dependence — rare earth metals were removed from the latest list of Chinese products the U.S. had slapped tariffs on in September.

Strict production quotas, intended to help control prices and reduce the polluting industries’ environmental impact, have incentivized a thriving shadow industry existing alongside state-approved operations. This shadow industry encompasses the whole supply chain — from mining and extraction, to final export through smuggling over the border. In 2011, 120% more rare earth metals were smuggled out of China than were exported legally, according to the Association of China Rare Earth Industry, complaining that the country, despite its dominance over the supply, could not set prices.

Ensuring that local governments are complying with central directives is a key problem, and is the focus of both the latest inspection and the last major one launched in late 2016. Smuggling had led to more rare earths being exported at lower prices, according to the notice issued that year by the MIIT. In September, Jiangxi province, a major rare earth producer, launched its own four-month investigation into illegal mining and smuggling.

Japanese traders said in 2010 that China temporarily blocked exports of rare earths amid a diplomatic row over the use of disputed waters in the South China Sea, during which a Chinese boat captain was detained. Rare earth prices spiked in 2011 after China ratcheted up export curbs, citing environmental concerns. Three years later, the World Trade Organization ruled against China, saying that such export curbs were not justified. China removed them in 2015, but can still partially control prices through production quotas.

These quotas recently became the topic of controversy, with the MIIT denying a report that alleged that it had cut production quotas for this year.

An Oct. 25 report from Reuters said that China had limited production in the second half of 2018 to the lowest level in five years, citing Netherlands-based Adamas Intelligence. The MIIT said Monday that this claim was “not consistent with the facts,” and China had in fact increased its production quota for the whole of 2018 by 15,000 metric tons (16,500 U.S. tons) from the year before, according to the China Securities Journal.

The MIIT said the reason the quotas for the second half of the year were set so low was because the quotas in the first half of the year took up a greater proportion of annual production. The original Adamas report had acknowledged that quotas had increased in the first half of 2018, but had said most of this increase was simply legitimizing existing black-market production, rather than an actual hike in output.

The Adamas report also claimed that the legitimized black-market production was mostly consumed domestically, and therefore didn’t add to exports, arguing that tightened quotas would probably lead to higher prices.

China exported nearly 40,000 metric tons of rare earth metals from January to September 2018, 3.9% more than the same period a year before, according to customs data.