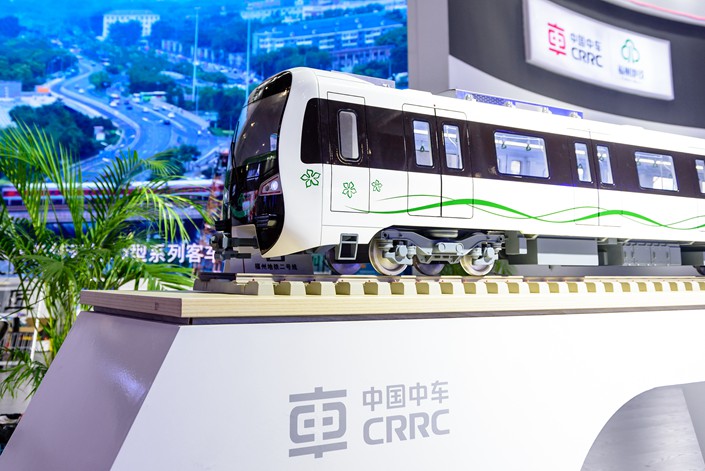 A model of a train is displayed at a CRRC booth at an exhibition in Fuzhou, Fujian province on June 20. Photo: VCG

State-owned train-car manufacturer CRRC Corp. has announced that its overseas assets ballooned more than tenfold to 34 billion yuan ($4.9 billion) from 2013 to 2017.

The company touted the increase in its assets abroad as a sign that it has made major strides in its expansion abroad since 2013, when it had about 3 billion yuan in overseas assets. That was the year that President Xi Jinping first proposed the Belt and Road Initiative. The initiative is an ambitious project to forge trade and investment links with other parts of the world through overseas investment.

At a media event on Tuesday, CRRC also announced it had hired 5,700 people outside China by the end of last year, including 4,700 local employees, a figure that was up from 509 in 2013.

The announcement came days after China’s largest maker of train cars said it had secured two overseas deals in Turkey and Chile.

On Friday, a CRRC subsidiary signed a contract worth $500 million with the government of Istanbul. Also on the same day, another CRRC unit won a bid in Chile to sell 36 train cars to local rail operators for an undisclosed amount.

The agreements show that the company has had success with its overseas expansion at a time when rising trade tensions between Washington and Beijing have cast doubt upon Chinese companies’ abilities to close deals abroad.

Lou Qiliang, vice president of CRRC’s overseas operations, attributed its success in Turkey to what he called the company’s “localization” strategy. CRRC has been hiring local citizens, setting up local facilities and procuring components from Turkish companies since 2013, he said.

Without this long-term cooperation, Lou said it would not have been possible for CRRC to win the bid against such stiff competition as France’s Alstom SA and Spain’s CAF.

For the nine months through September, CRRC’s profits rose 11% to 7.5 billion yuan on revenue of 135 billion yuan, according to its latest financial report.