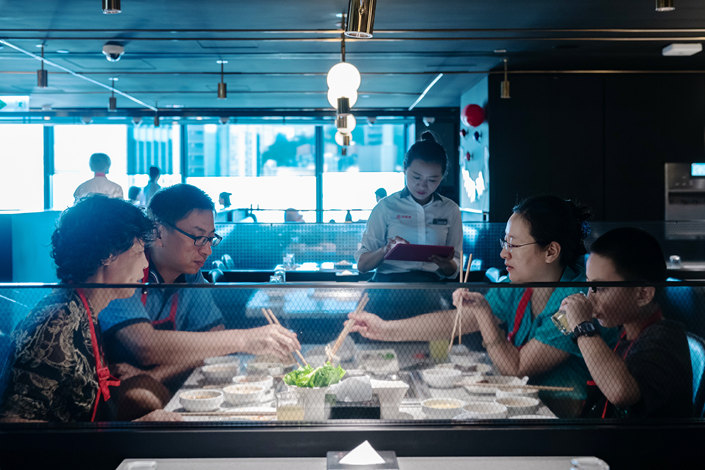 The company’s British subsidiary has posted vacancies to local recruitment websites this week, with jobs-on-offer including spice specialists; meat slicers, who aim to keep diners supplied with quick-cooking, paper-thin lamb and beef; and performers who entertain customers with the companies signature noodle dance, in which a dancer stretches dough into long ribbons around their body before sending it flying toward a customer’s nose — usually pulling up a few inches short.

The company, known in China for its attentive service, says that the noodle dancers should be able to perform Sichuan province’s traditional mask dance, in which a performer changes his or her mask so quickly that it can appear instantaneous.

The new restaurant will be located in Piccadilly Circus, a busy central London square, along with the company’s European headquarters, involving a total investment of 5 million pounds ($6.5 million).

Wages for Haidilao’s staff in London are a minimum 30,000 pounds a year or 8 pounds an hour, which is lower than the city’s average wage last year, which was 35,033 pounds according to compensation researcher PayScale. But the company offers free staff meals and a 50% discount to employees and their close relatives.

In its job posting, the company said it will set up more than 20 restaurants in London by 2020 and will subsequently expand to other European countries. It now operates more than 350 locations across China and dozens of others overseas, such as in Singapore, South Korea, Japan and the U.S.

In an interview with Caixin ahead of the company’s September initial public offering in Hong Kong, company co-founder and Chairman Zhang Yong said that overseas expansion is “a must” for Haidilao. The contribution that stores abroad made to total revenue increased to 7.5% in the first half of the year from 5.3% in 2015, according to its prospectus.

However, breaking into the Western market won’t be easy. Zhao Yong, CEO of U.S.-based Chinese fast casual restaurant chain Junzi Kitchen, told Caixin that hot pot will at first be a niche market in Western countries because many diners are unfamiliar with traditional Chinese food.

Ye Fengtao, co-founder of catering training platform Shaozi Education, said that chains such as Haidilao are changing the view of Chinese food in Western markets. Previously the cuisine was seen as delicious, but “dirty, disorderly and bad.”

However since last year, food safety problems have plagued the decades-old hot-pot chain, as undercover reporters exposed rat infestations in certain outlets in Beijing and staff who handled food with their bare hands in stores as far away as Singapore. Its latest move to address the scandal was launching a new “smart” concept restaurant in Beijing equipped with an automated storeroom that operates in low temperatures so that rats and cockroaches can’t survive, according to the company.