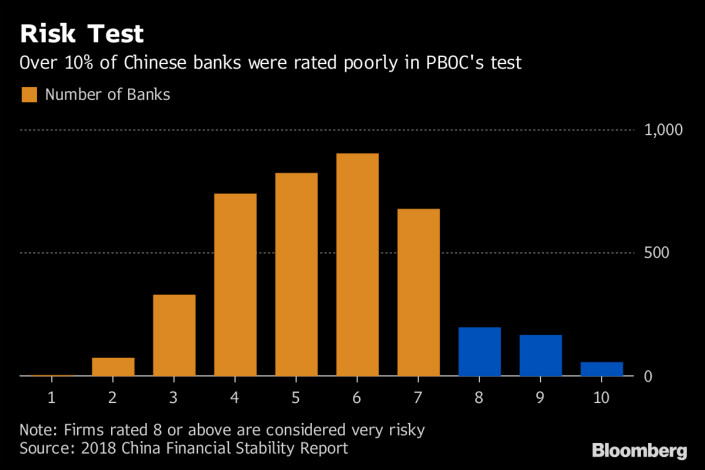 (Bloomberg) — About one in 10 of China’s 4,000 banks received a fail rating in the central bank’s first review of the industry’s risks, highlighting challenges facing the nation’s $45 trillion financial system.

Four hundred and twenty firms, all rural financial institutions, were deemed extremely risky after scoring eight or higher out of 10, according to the 2018 China Financial Stability Report published by the People’s Bank of China (PBOC), the nation's central bank. Just two banks received the top rating in the review, the first time the central bank has assigned ratings. None of the institutions were named.

China’s government has made controlling financial risk a priority as President Xi Jinping tries to prevent a record buildup of corporate debt from tipping the economy into a crisis. Even as authorities have appeared to ease up on the campaign in recent months to boost short-term growth, financial regulators haven’t toned down their determination to root out industry malpractices.

The PBOC’s reviews, conducted in the first three months of the year, will determine how they police particular banks. Firms will be subject to different policies, such as fees on deposit-insurance mechanisms, reserve ratio requirements and limits on asset growth, based on their scores.