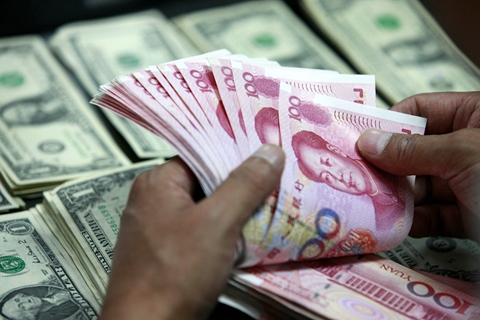 China’s deficit in foreign exchange settlements widened in September to the most in 14 months, reflecting mounting pressures facing the Chinese currency amid trade tensions with the United States.

Chinese banks sold a net $17.6 billion of foreign currencies in September, the most since July 2017, the State Administration of Foreign Exchange (SAFE) said in a statement Thursday. That compared with net sales of $14.9 billion in August.

“Companies are buying more foreign currencies and selling less as the expectation of the yuan’s depreciation grows,” said Wang Youxin, a researcher at the Institute of International Finance of the Bank of China. “Reducing U.S. dollar debt and increasing foreign currency assets are normal market performance.”

The yuan has declined 6% against the dollar this year as trade frictions between the world’s two largest economies heated up. Goldman Sachs predicted Wednesday that the Chinese currency may weaken further in the next six months, according to a CNBC report.

The yuan fell just 0.75% against the U.S. dollar in September, signaling that the central bank may have taken moves to defend the yuan, some analysts said. The cost of defending the yuan was also reflected in China’s foreign exchange reserves, which last month fell to the lowest since August 2017.

Changes in foreign reserves and foreign-exchange purchase positions usually are signals of the central bank’s moves. State-backed big lenders pumped out liquidity in dollars almost every day since September, a trader for a Chinese bank told Caixin.

But other traders said the dollar liquidity increase from banks is not necessarily linked with the central bank, and the central bank’s reintroduction of “countercyclical factor” has mainly helped stabilize the yuan.

The U.S. Treasury Department said last week that China was not a currency manipulator, while it remained “deeply concerned” by the trade imbalance between the two countries.

The yuan traded at 6.9477 per dollar on Thursday, while the offshore yuan was 6.9490, edging close to the psychologically important level of 7 yuan per dollar.

China is expected to achieve balance in international payments, said SAFE’s Wang, adding that China will continue opening up its capital markets in an orderly manner. The regulator will take several measures to stabilize the foreign exchange market, including cracking down on speculation, she said.