By Liu Mengjie and Yang Ge 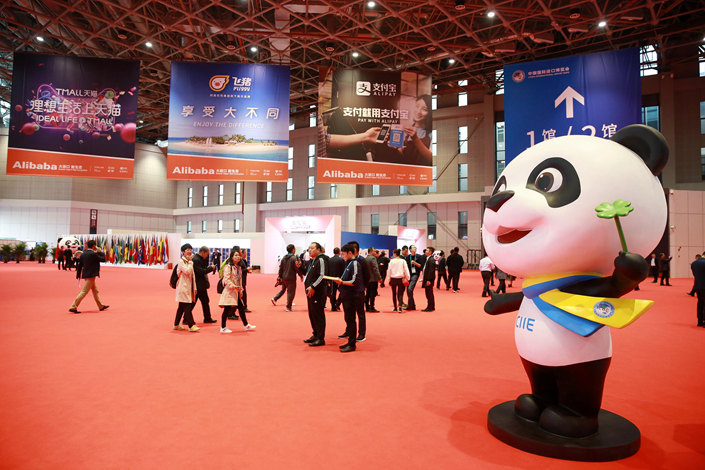 Ads for Alibaba Group Holding Ltd. are seen at the site of the first Chinese International Import Expo in Shanghai on Monday. Photo: VCG

Four of China’s leading e-commerce operators have pledged to facilitate more than 1.5 trillion yuan ($217 billion) in imports over their platforms, seizing on growing consumer preference for such foreign goods as they also heeded Beijing’s call to boost the nation’s imports.

E-commerce leader Alibaba Group Holding Ltd. led the group with the biggest pledge to facilitate $200 billion worth of imports over its various platforms over the next five years. At the same time, No. 2 player JD.com Inc., as well as the smaller Suning.com Co. Ltd. and NetEase Inc., announced smaller deals to import goods from a wide range of foreign companies and markets.

The flurry of announcements came the same week of the first China International Import Expo, a Beijing signature event taking place in Shanghai, aimed at boosting the country’s imports.

China runs big trade surpluses with many countries due to its historically strong focus on exports to power its rapid economic growth. That particular imbalance has been one of the central complaints by U.S. President Donald Trump in his ongoing trade war with the world’s second-largest economy.

Alibaba’s was by far the largest announcement concurrent with the expo, with the company saying 120 countries will supply the $200 billion worth of imports it aims to facilitate between 2019 and 2023. Companies that have signed on to the effort include U.S. consumer goods giant Procter & Gamble Co. and Swiss food leader Nestle SA.

“China’s middle class is booming. As incomes are rising in China, consumers want faster access to and a wider variety of high-quality products from around the world,” said Alvin Liu, general manager of Tmall Import and Export, the cross-border platform operator of Alibaba’s main Tmall marketplace. “Tmall is uniquely positioned to help international brands tap into the growing China market as consumers seek to upgrade their lifestyle.”

Alibaba pointed to a recent Deloitte research report showing imports took up about 10.2% of China’s total e-commerce last year, a sharp increase from just 1.6% in 2014. Much of that has been driven by the nation’s growing middle class, bolstered by scandals involving tainted food and fake products that have led many Chinese to put more trust in foreign products over local equivalents.

A report from China’s own e-commerce trade association said some 4.5 trillion yuan in goods changed hands in cross-border e-commerce trade involving China in the first half of this year, up 25% from a year earlier. But it noted that most of that was exports involving businesses selling to other businesses (B2B). Of the total figure, 77.1% was exports, while 84.6% of transactions were B2B. By comparison, much of the business on mainstream e-commerce sites like Alibaba’s and JD.com’s tends to involve ordinary consumers as buyers.

While Alibaba’s target covered its hopes for the next five years, JD.com, Suning and NetEase were focused more squarely on deals signed in and around the big trade event, which was expected to feature 1,000 exhibitors and attract 150,000 visitors. JD.com said it signed orders worth nearly 100 billion yuan in the run-up to and during the event, while Suning and NetEase reported similar net orders worth 15 billion euros ($17.1 billion) and 20 billion yuan respectively.

Goods covered by the various agreements and commitments ran a wide range, including infant care, makeup and luxury products.

While China’s big homegrown e-commerce companies have been aggressively boosting their cross-border business, global giants Amazon.com Inc. and Walmart Inc. have also been getting in on the act. Walmart works closely with JD.com, in which it owns a 10% stake. Amazon has also sought to differentiate itself within the fiercely competitive market by focusing on its own foreign roots and access to foreign products.