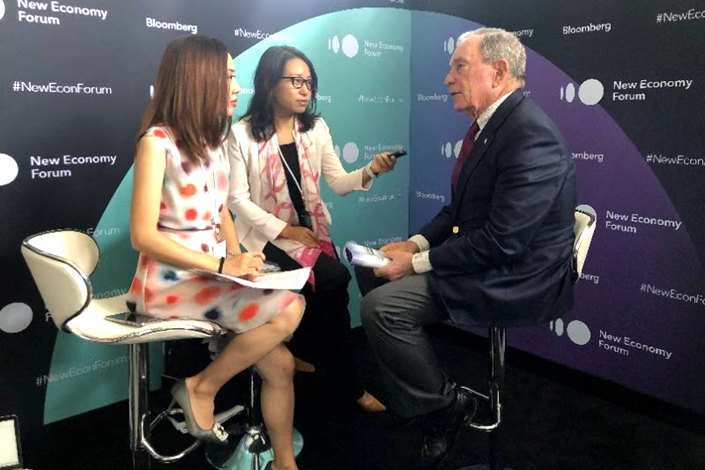 Media mogul Michael Bloomberg is interviewed on the sidelines of the Bloomberg New Economy Forum in Singapore on Tuesday. Photo: Liu Yanfei/Caixin

* Former New York City mayor says current Sino-U.S. trade spat has not risen to the level of a “cold war”

* Bloomberg, who is rumored to be eyeing a 2020 presidential run, also says good government can be delivered the same way as one delivers good businesses

(Singapore) — China is doing what it should be doing with its Belt and Road Initiative, and the U.S. should be doing the same thing and should not say anything about China’s efforts, billionaire media mogul Michael Bloomberg told Caixin in a Tuesday interview on the sidelines of the Bloomberg New Economy Forum he organized in Singapore.

Bloomberg’s words, as well as the forum, come amid rising concerns about China’s attempt to challenge the Western-dominated global economic and financial order. The Belt and Road Initiative is one of the programs seen as a tool for China to achieve such a goal.

Beijing first announced this initiative in 2013, calling on broad participation to develop infrastructure along the land-based ancient Silk Road and a maritime route connecting China and Europe. The program involves around 70 countries and regions, which together comprise more than 60% of the world’s population.

Through this effort, China is establishing customer bases and supply sources, and “America is not doing that much different,” Bloomberg said.

Over the past few months, the world has witnessed an escalating conflict between the two largest economies, marked by a tit-for-tat tariff war and U.S. accusations of forced technology transfers and intellectual property theft.

“There will always be spats, but I don’t foresee a day when either country feels that they have to end relationships,” Bloomberg said. “I don’t think it’s a cold war.”

Bloomberg is a critic of the trade war that U.S. President Donald Trump launched against China. Also, he’s unsatisfied with many of the Trump administration’s domestic policies.

The 76-year-old founder of financial media giant Bloomberg LLP and former mayor of New York City has recently been back in the spotlight as rumors have begun to swirl that he will run for president in 2020.

In October, Bloomberg rejoined the Democratic Party after 17 years outside the party — first as a Republican, then as an independent. “We need Democrats to provide the checks and balance our nation so badly needs,” he said on social media platform Instagram.

Regardless of whether he’s in business or in public office, Bloomberg is a big believer that the key asset is people. “It is the care, the feeding, and the recruiting of that asset that is the most important thing.

“People want recognition and respect. Now in business, the recognition is typically in money. And in a government, it is in the satisfaction of doing something,” he said.

Furthermore, Bloomberg believes good government can be delivered the same way as one delivers good businesses. “You have a woman or a man at the top who sets the tone for honesty, hard work, and willingness to take risks and those kinds of characteristics. If people respect that person, they will follow that person and perform well; and if they don’t have respect for that person, it’s hopeless.”

He believes the same philosophy applies to foreign policy. “On the other side of that phone call or the desk you’re sitting there, it’s a human being who has the same interest as you,” he said. “There’s no reason why we can’t both benefit. Life is not a zero-sum game.”