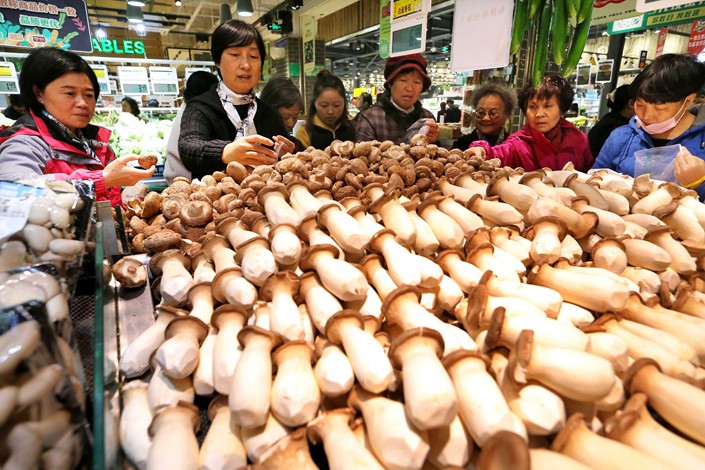 *The consumer price index rose 2.5% year-on-year in October, unchanged from the month before

The consumer price index (CPI), which measures the prices of a select basket of consumer goods and services, rose 2.5% year-on-year in October, unchanged from September’s reading, according to the National Bureau of Statistics (NBS) (link in Chinese).

Food prices rose 3.3% year-on-year in October, down from 3.6% in the previous month. Vegetables led the moderation in food inflation, with annual price growth slowing to 10.1% from September’s 14.6%.

On a monthly basis, the CPI rose 0.2% in October, the slowest pace in four months. The slowdown was mainly driven by the decline in  food prices, which fell 0.1% month-on-month, compared with an increase of 1.5% in September.

Rising supplies drove down the prices of vegetables and eggs in October from a month earlier. A glut of autumn-planting vegetables and those that can be stored over the winter went on sale last month. In addition, hens laid more eggs in the cool weather, NBS analyst Sheng Guoqing said in a statement (link in Chinese).

“Policymakers will pay more attention to evidence that underlying price pressures remain subdued and will continue to ease policy over the coming months to shore up economic activity,” Julian Evans-Pritchard, an economist with research firm Capital Economics, said in a note.

Year-on-year growth in the producer price index (PPI), which tracks the changes in the prices of goods circulated among manufacturers and mining companies, fell further to a seven-month low of 3.3% in October, down from 3.6% in the month before, NBS data showed.

The slowdown in factory inflation was due to continued weakness in domestic demand and a high comparison base last year, analysts with Nomura International (Hong Kong) said in a note. “We expect the downtrend in PPI inflation to continue in a milder manner through winter given a less severe anti-pollution campaign this year,” they said.

Evans-Pritchard basically holds the same view. “Global oil prices are now falling,” he said. “Inflation in the prices of the intermediate manufactured goods that make up the bulk of China’s factory output is also easing alongside a weakening in economic activity.”

However, as the yuan depreciates, a further rise in import-price inflation could impact domestic prices. “Rising import prices are likely to put some upward pressure on producer prices, but not enough to prevent PPI inflation from falling. The effect on CPI inflation would be negligible: the relationship between import prices and consumer prices in China has typically been poor,” Evans-Pritchard said.

Over the first 10 months of this year, the CPI and the PPI rose 2.1% and 3.9% year-on-year, respectively. Both growth rates were in line with government estimates. Central bank Governor Yi Gang expected the CPI for all of 2018 to grow slightly more than 2%, and the PPI to grow between 3% and 4%.