By Noelle Mateer and Charlotte Yang 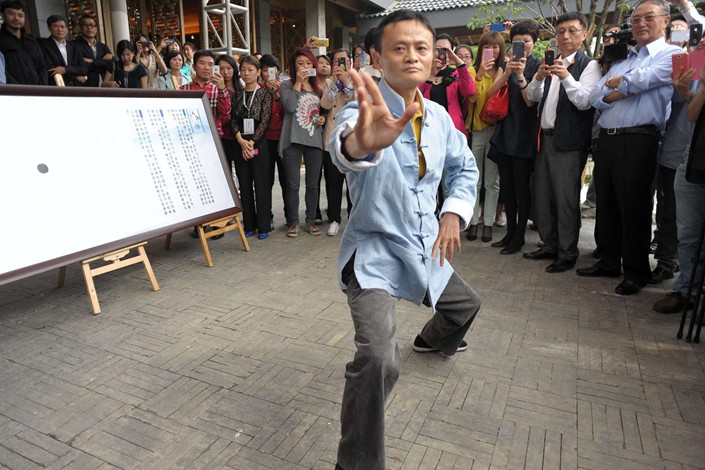 Aisen Qiao knows he shouldn’t be religious. “I’m a communist,” he said, “which requires me to be an atheist.” But he likes keeping a shrine in his apartment nonetheless. Back in college, he kept a shrine to Confucius, the sage known for his commitment to education. “We would worship Confucius, to pray we wouldn’t fail our courses.”

But then he moved to Beijing, where he got a job in marketing, and suddenly the old sage didn’t seem so relevant. Qiao was trying to make money. He works 12 hours daily — from 9 a.m. to 9 p.m. — and spends two hours commuting. And so the 25-year-old communist swapped out the picture of Confucius for one of billionaire tech tycoon Jack Ma.

“It is a gift from my college friend, who saw my Weibo handle, (which translates to ‘worshipping at the church of Jack Ma’)” he said. Today, when Qiao smokes in his apartment, he lights some incense for the mini Ma as well.

The fandom surrounding Alibaba Group Holding Ltd. founder and Executive Chairman Jack Ma has reached spectacular levels. To many, Ma is more than a celebrity — he’s an idol. And to some, he’s more than an idol — he’s a god. As Taobao’s Singles Day shopping festival of Nov. 11 approaches, his most fervent devotees in China are giving offerings to their shrines for good fortune. And while many set up their shrines in a tongue-in-cheek manner, their messaging is clear: Jack Ma is today’s god of money, and the idolatry surrounding him isn’t going anywhere anytime soon.

Ma is arguably China’s most charismatic billionaire. His unique story is oft-parroted by his fans as evidence of his superior character: Ma began as an English teacher, and he recently announced his plan to retire next year and devote himself to education once again. Photos and videos circulate online of Ma years ago, speaking passionately about his dream for a company at a time when no one was listening to him.

The stories of Ma’s peers simply aren’t as inspiring as his. Tencent Holdings Ltd.’s Pony Ma has made a fortune off video games, which have been blamed for widespread internet addiction. Wanda Group’s Wang Jianlin comes from a stodgier military background and grants few interviews. JD.com’s Liu Qiangdong (also known as Richard Liu) was himself the center of worship for his rags-to-riches origin, but he was recently accused in the U.S. of rape.

Most importantly, Alibaba is the most famous Chinese tech company on the world stage, and Ma is its charming ambassador.

“When we were kids, we learned to ‘be disciplined when poor and be generous to people when rich,’” Qiao said. “But right now I am still in the ‘poor’ stage, and I can only discipline myself. But a man needs some dreams that one day he will be rich and can make contributions to society. And Jack Ma has done that.”

This attitude is consistent with “idol worship,” according to Xiaodong Yue, professor of applied social studies, City University of Hong Kong, who studies fandoms that verge on religious fervor — a category he thinks applies to the cult of Ma.

“Idol worship used to be predominately religious. It’s only with modern society, and particularly mass media, that idol worship became recreational,” Yue tells Caixin. Today’s idols are a curious mix of pop-culture icons, businesspeople and politicians. “For college students, there is an increasing trend of identifying with political or business luminaries,” he said. Teens and younger people idolize movie stars and musicians more.

The “idol worship” Yue studies is distinct from mere fandom. The cult of Ma is more than that as well.

The first time Ma worship made headlines was November 2015. Images went viral of a group of online merchants in southern China’s Guangdong province bowing before shrines to Ma ahead of that year’s shopping festival.

Search Alibaba e-commerce platform Taobao for Jack Ma shrines today, and independent vendors sell plenty of options. Some are rife with religious symbolism. Some depict him wearing traditional red robes. Others are less serious. One is a ceramic action figure, featuring Ma’s face on Superman’s body.

Danny Li, a creative director at an advertising agency in Shanghai, created artwork for Ma fans to worship. “As the biggest e-commerce platform, Alibaba is always a topic of discussion,” he said. “On social media, a lot of people call Jack Ma the ‘god of wealth.’ So I thought I could create a better-looking poster for them to worship.” Li’s poster features a cartoon Ma sporting a cowboy hat, riding a bull and waving a lasso.

“On social media, a lot of people worship him, but of course they’re kind of kidding,” Li said. “Worship is one of our traditions when celebrating some festivals, so it’s normal. I think it’s interesting and very cute,” he said, calling the ritual a “daily superstition.”

Many “worshippers” view their practice with a sense of humor. Case in point: One image that went viral around Singles Day 2016 was of a miniature Jack Ma shrine with robots bowing in unison in front of it.

But this ritual has caused controversy on Weibo, where some users say this kind of worship is highly disrespectful to Jack Ma, as most figures worshipped by Chinese in such rituals are already dead. (It is believed that worshipping a person who is still alive will shorten the person’s life.) Other users have criticized the shrines as too fanatical about money and wealth. One netizen commented: “Whoever can help these people make money is a god. What a distorted outlook of life.”

Perhaps the worship of Ma can be better compared to that of a pop-culture celebrity. Last year, when Ma performed the theme song of a Jet Li film alongside pop star Faye Wong, the track hit No. 1 on streaming site Xiami. Jack Ma doesn’t even sing well.

Qiao’s worship is only semi-serious, but his admiration is real.

“I’m not really bowing to him,” he explains. “Instead of saying that I am worshipping Jack Ma, I say I am worshipping my dream. So many religions tell us to be nice to people, and to be generous to people. (Ma) has money and he has done that, which can lead us to believe that one day when we have money, we can also do that.

“I probably won’t be able to reach the level of Jack Ma, but at least I can work in that direction.”

Qiao’s plans for Singles Day? No shopping. No mingling events for singles. Instead, he said with a laugh, “I’ll be working overtime.” Perhaps that’s the best way to honor Ma after all.