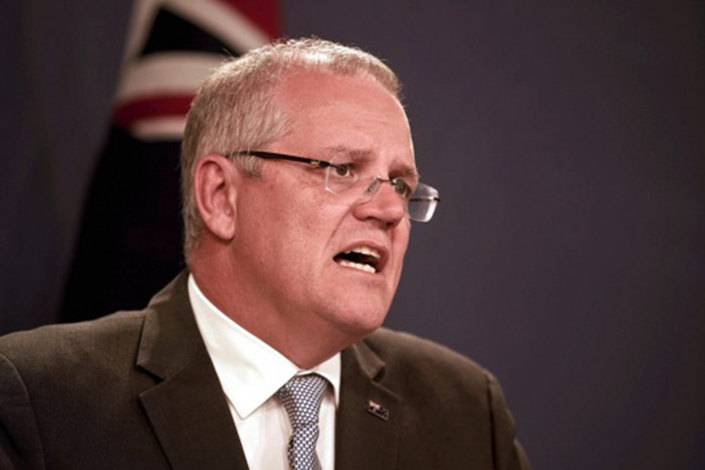 (AFR) — Australia would be willing to co-fund infrastructure projects with China, using its newly announced A$2 billion ($1.42 billion) package as leverage, if it helped with regional stability, Prime Minister Scott Morrison said.

Speaking to The Australian Financial Review before his departure to Singapore for the East Asia Summit, Morrison said Australia should not feel the need to choose between competing regional giants, the United States and China but, as John Howard did, seek to elevate both relationships in parallel.

Asked if that meant partnering in one-off projects as part of China’s Belt and Road Initiative, Morrison concurred, although he would not use the name the Chinese have given to their global infrastructure initiative.

Morrison will spend two days in Singapore at the summit before spending Friday in Darwin with Japanese Prime Minister Shinzo Abe. On the weekend he will be in Port Moresby for the Australia-Pacific Economic and Co-operation (APEC) summit.

Australia is increasingly having to navigate through rising tensions between the U.S. and China. On the weekend at APEC, a separate regional infrastructure initiative to rival Belt and Road and which involves Australia, the U.S. and Japan could announce projects.

On Monday, government finance agencies from the three countries met to formally agree on the joint financing initiative.

America’s Overseas Private Investment Corp., the Japan Bank for International Co-operation, and Australia’s Export Finance & Insurance Corp., to which Morrison gave another A$1 billion in funding last week, will work together on energy and other infrastructure projects that have national security implications.

Australia’s participation in this initiative will be separate from A$2 billion regional loans and grants fund that Morrison announced last week as part of the “step-up” into the south-west Pacific.

Morrison told the Financial Review the A$2 billion could be used to co-fund a venture with China or any other willing nation.

“This can be used to leverage even bigger projects,” he said.

He said the ultimate goal was regional stability. Morrison said he would ape John Howard who proclaimed the simultaneous elevation of relationships with Beijing and Washington as one of his three top achievements in government.

“In many respects you’ll see me try and take a similar approach to John, that shouldn’t surprise you,” he said.

“He used to talk about that relationship and not having to choose but just understanding the differences in the nature of both relationships,” Morrison said. “As a sovereign nation, we’re going to have our own views on a range of things but we respect the views absolutely of those who may not share all beliefs with us. It means we can find areas of engagement we agree on and we don’t take exception to other areas that are unrelated to things we are doing.”

U.S. President Donald Trump will miss both summits but Vice President Mike Pence, who will represent the U.S., is talking tough against China ahead of his arrival.

“We seek an Indo-Pacific — from the United States to India, from Japan to Australia, and everywhere in between — where sovereignty is respected, where commerce flows unhindered and where independent nations are masters of their own destinies,” he wrote in The Washington Post. “Authoritarianism and aggression have no place in the Indo-Pacific region.”