Barry Eichengreen: The Belt and Road in the Mirror of the Marshall Plan 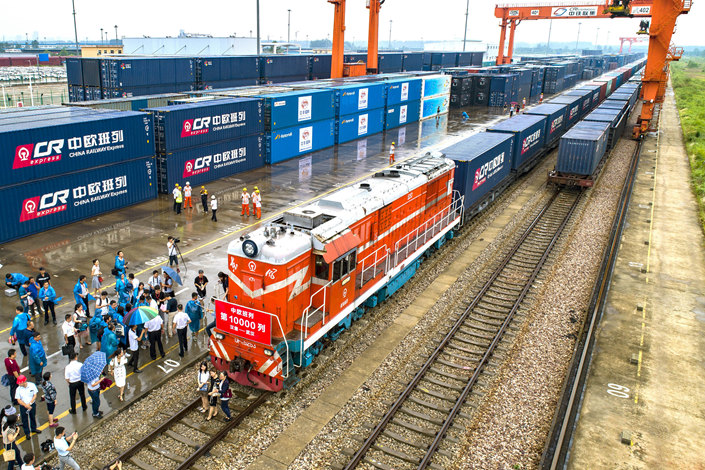 The Marshall Plan’s most visible accomplishments were its least important. U.S. funds contributed visibly to the reconstruction of Europe’s transport network, allowing the shipment of raw materials to factories and final goods to markets. But the problem with this story is that wartime damage to Europe’s transportation infrastructure was heavily cosmetic or easily repaired. This was the key lesson of Allied strategic bombing — that railways and bridges put out of commission one night could be put back into operation the next. While rail traffic in Western Europe was depressed immediately following World War II, it was back up to within a couple of percentage points of 1938 levels by 1947, well before the Marshall Plan came on stream.

The emphasis on transportation infrastructure is similarly evident in The Belt and Road Initiative. But the benefits are similarly limited. Transportation may be the key to unlocking trade and commercial development in landlocked Sub-Saharan African and Central Asian countries, but it is challenging to make this argument more generally. Ambitious projects like the port of Hambantota in Sri Lanka, Kenya’s railway from Nairobi to Mombasa, and the Chinese-built road from Lusaka to Chirundu, in Zambia continue to disappoint.

It is difficult, similarly, to argue that the Marshall Plan was critical for aggregate investment and growth. At 2% of the recipient countries’ GDP spread over four years, it would have made only a relatively modest contribution even if the entirety of Marshall Plan funds went into investment, where in practice a substantial fraction paid for other things. The result was at most a quarter of a percentage point of additional growth per annum — helpful but not world altering.

Chinese investment in Africa similarly accounts for only a small fraction of the aggregate investment of the recipient countries. Again, the impact on growth operating through this channel is unlikely to exceed a fraction of a percentage point per annum.

Then there was the role of the Marshall Plan in providing energy and raw material inputs. This was another staple of Marshall-Plan publicity: colliers and freighters carrying raw materials and coal being unloaded at Europe’s docks. For select sectors and industries a case can be made: since Europe grew no cotton of its own it can be argued that Marshall-Plan funds relaxing the balance-of-payments constraint made a critical contribution to getting its cotton-textile industry back on its feet, for example. But there were also substitution possibilities: silk could be substituted for cotton, water power for coal. Again, therefore, the overall effects were small.

The connection today, in any case, runs in the other direction: the Belt and Road is designed to enhance China’s access to imported energy and raw materials rather than the other way around. To the extent that these investments enhance the access of other countries to the Chinese market, the income effects are plausibly positive. But insofar as they increase the dependence of those countries on the production of natural resources, exposing them to the “resource curse,” they are a mixed blessing.

Finally the Marshall Plan financed visits by European managers to American firms, where they were able to see how production was organized and managed on the shop floor. One recent study of Italy finds that missions of European managers to the United States had a positive impact on firm sales and profitability.

In the current case, the flow of management has been heavily in the other direction, from China to countries receiving its investments. Chinese management practices have not been received favorably, to put an understated gloss on the point. The gap in managerial style between China and its foreign partners is evidently greater than that between the U.S. and Europe in the 1950s. Whether Chinese management practices can be productively transferred to other contexts is dubious at the least.

Where the Marshall Plan mattered most was in encouraging the recipients to implement economic reforms consistent with the preferences of the donor and, more importantly, with the maintenance of economic growth. European governments were required to balance budgets, stabilize exchange rates, and relax price and exchange controls — that is, to move in the direction of a market economy. They were required to reduce trade barriers. They were required to expel from government politicians and parties that opposed these policies and questioned the legitimacy of private property rights.

Will the Belt and Road Initiative encourage the recipients to restructure their economies to more closely resemble China’s? China’s economic prowess, made more visible by Belt and Road investments, may encourage some governments to adopt elements of the Chinese model. Installation on the rooftops of African homes of satellite dishes capable of receiving television signals, prominently including Chinese programming, may have some impact on public opinion. But in contrast to the U.S. government after World War II, China has been reluctant to attach explicit policy conditions to its loans. There may be a populist reaction against light-touch regulation in the wake of the global financial crisis, but it is hard to imagine countries in Southeast Asia, South Asia, Latin America and Africa jettisoning their market-oriented reforms in favor of Chinese-style central control.

That the Belt and Road Initiative will lead other countries to emulate the Chinese model thus seems unlikely on balance. More likely perhaps is that China itself will move in the other direction.

Barry Eichengreen is the George C. Pardee and Helen N. Pardee Professor of Economics and Political Science at the University of California, Berkeley. His latest book is “The Populist Temptation: Economic Grievance and Political Reaction in the Modern Era.”