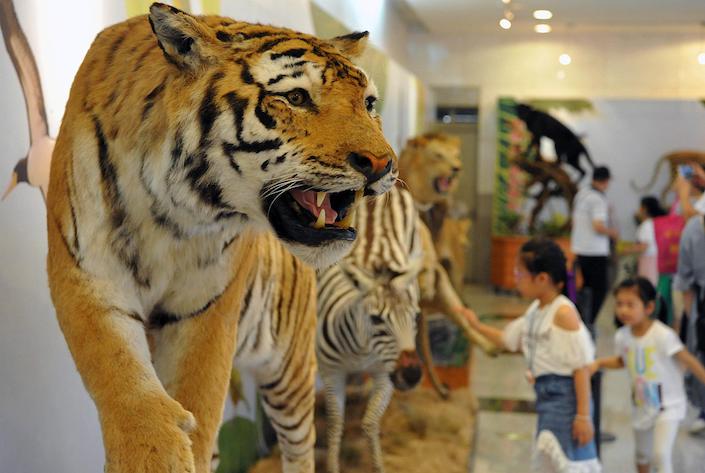 People visit a specimen exhibition in Fuzhou in May. China has fewer than 30 tigers living in wild, zoologists estimated. Photo: VCG

China shelved a controversial decision to legalize the use of tiger and rhinoceros parts for scientific and medical purposes amid public outcries that such a move could increase the risks for endangered wildlife.

A senior official of the State Council, the cabinet, told media Monday that the government decided to postpone an order issued last month to lift a 25-year ban on trading in rhino and tiger products.

“The Chinese government has not changed its stance on wildlife protection and will not ease the crackdown on illegal trafficking and trade in rhinos, tigers and their byproducts and other criminal activities,” Ding Xuedong, the executive deputy secretary-general of the State Council, told the official Xinhua News Agency.

The move marks a rare concession by the Chinese government under mounting pressure from domestic and global environmental advocates. The State Council in late October issued a document (link in Chinese) listing four scenarios under which the use of rhino and tiger products would be legal, including scientific research, promotion of animal protection, medical research and healing, and the trade of rhino and tiger products as antiques.

China banned trade and use of rhino horns and tiger bones in 1993 when the wild-tiger population in its territory dwindled to fewer than 100. Traditional Chinese medicine believes the animal parts have strong medicinal effects and can treat various diseases. China still faces great challenges to prevent the endangered species from declining further. Zoologists estimated that there are fewer than 30 tigers living in the wild in China.

Although the policy document required that materials to be used for legal purposes must be obtained only from animals on farms, it was widely seen as an effective easing of the country’s strict ban on tiger and rhino parts trade and sparked an uproar for its potential threat to endangered wildlife.

The World Wide Fund for Nature (WWF) said the loosening of the regulation, even with the stated limitations, would still stimulate demand and threaten the survival of wild tigers and rhinos.

In an interview with Caixin, a WWF official said that any degree of trade resumption can whitewash illegal trafficking, as it would be very difficult to distinguish farm-raised animals from wild ones.

In announcing the suspension of the controversial policy, the State Council’s Ding said the government will continue to organize special crackdown campaigns focusing on the illegal trade of rhinos, tigers and their byproducts. Illegal acts will be “dealt with severely,” he said.