By An Limin and Ke Dawei 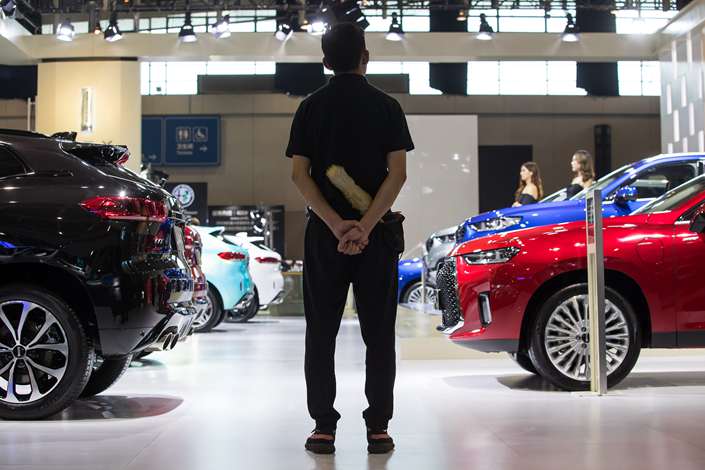 After 28 years of full-throttle growth, China’s automobile industry will finally stall this year, the boss of one of China’s top carmakers has said. Growth in the world’s biggest new car market will decelerate for the first time in almost three decades in 2018 and will enter a slump lasting two to three years, said Wang Yongqing, the boss of General Motors Co.’s joint venture in China at an industry event Thursday in Guangzhou. While sales at the start of 2018 were strong, the growth engine started to flag from April with a real drop hitting from June onwards. Wang, general manager of SAIC General Motors Co. Ltd., expects wholesale sales of new passenger cars will drop by between 3.5% to 4.6% in 2018, with actual retail sales falling by more than 5%.

Carmakers and industry experts have been sounding the alarm for some time that the industry was entering a difficult stretch, with Xu Changming, the vice president of government think tank the State Information Center saying last week that carmakers faced their biggest crisis in two decades.

The same week, figures released by the China Passenger Car Association revealed that car sales in October dropped 13.2% year-on-year to 1.98 million units. For the first 10 months of the year, sales in the world’s largest auto market fell 2.5% to 18.4 million units, bringing it closer to an annual decline for the first time since 1998.

Rumors have been circulating that the government will step in to help the industry by introducing a preferential tax policy. But yesterday a spokesman from state-planning agency the National Development and Reform Commission appeared to dash those hopes, denying that it had studied or was preparing for such a policy.

Wang pinned carmakers’ problems on rising house prices in the economically less prosperous third- and fourth- tiers eating into the funds that might have otherwise have gone on car sales. This suggests that problem areas of China’s economy are starting to weigh on growth in other vital sectors.

There appears to be a correlation. Data provided by information service Wind shows that home prices in third- and fourth-tier cities have risen rapidly since 2016, with more than half of house prices rising by more than 50%.

For several years, automobile sales in third- and fourth-tier cities have long been the main driving force behind growth in the car market, said UBS Securities analyst Gong Wei, who agrees that high housing prices have squeezed new car purchases. However, quantifying the exact impact is difficult, he added.

At the same time, China’s used-car market is expected to continue expanding. More than 12.4 million vehicles traded hands last year, up 19.3% from 2016, according to the China Automobile Dealers Association. While that is still a ways behind the 39.2 million used cars that auto-information platform Edmunds.com Inc. said were traded in the U.S. last year, the uptick suggests China’s car market is entering a more developed phase, analysts said.