By Sun Liangzi and Ren Qiuyu 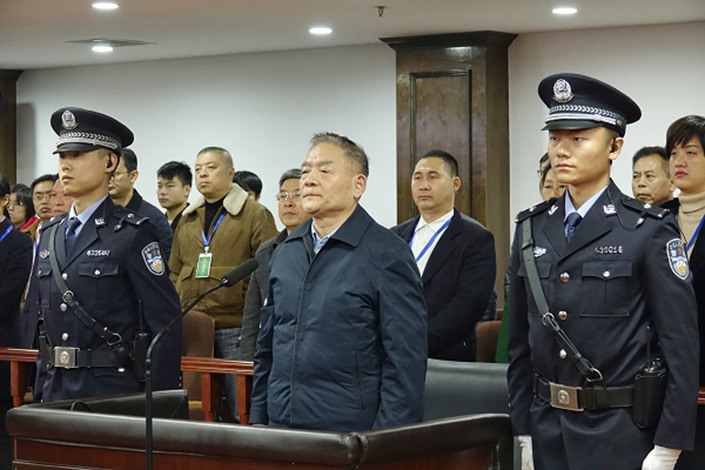 A former official in Xi’an, the capital of Northwest China’s Shaanxi province, was sentenced to life in prison for accepting bribes totaling over 109 million yuan ($15.7 million). He pleaded guilty and will not appeal the decision.

Wei Minzhou was found to have abused his office and accepted bribes over his 20-year political career in Shaanxi. He accepted bribes personally and through family members in exchange for assistance in matters including land bidding, project contracting and promotions, the court found.

Wei was the deputy director-general of the Standing Committee of the Shaanxi Province People’s Congress until May 2017, when he was placed under investigation by the Central Commission for Discipline Inspection (CCDI), the Communist Party’s graft watchdog, for “serious violations of discipline” — a common euphemism for corruption. He was arrested and stripped of his party membership in August 2017.

Wei was part of a large network of corruption in Shaanxi province, including officials and businessmen who have already been sentenced for corruption. According to a 2017 article in a magazine published by the CCDI, Wei and others in the province were involved in a network of profiteering and abuse of power. Another article published in the magazine around the same time said that the series of corruption cases linked to Wei and others in Xi’an revealed that the city has serious problems in party management and the political environment.

Wei, 62, joins a growing list of officials who have been sentenced to life in prison or given suspended death sentences after being found to have illegally acquired over 100 million yuan, usually through bribes and embezzlement.

Lai Xiaomin, the former head of China Huarong Asset Management Co. Ltd., tops the list with over 1.65 billion yuan of ill-gotten gains. He was placed under investigation in April and formally arrested in early November. He is now awaiting trial.

Many of the officials accused of taking bribes have been found to have up to hundreds of millions of yuan in cash hidden in their homes. Wei Pengyuan, the former deputy chief of the coal bureau at the National Energy Administration, was handed a suspended death sentence after 200 million yuan was found in one of his homes. A midlevel official in Beidaihe — a beachside resort in Hebei province known as the traditional summer retreat for top Communist officials — was found to have 120 million yuan in cash and 37 kilograms (81.6 pounds) of gold in his houses.

Corrupt officials have been targeted as part of an anti-graft campaign that began in 2012 under President Xi Jinping. Before serving as the deputy director-general of the Shaanxi Province People’s Congress Standing Committee, Wei served as the Communist Party secretary of Xi’an from 2012 to 2016.