The Chipmaker Caught in U.S. Assault on China’s Tech Ambitions 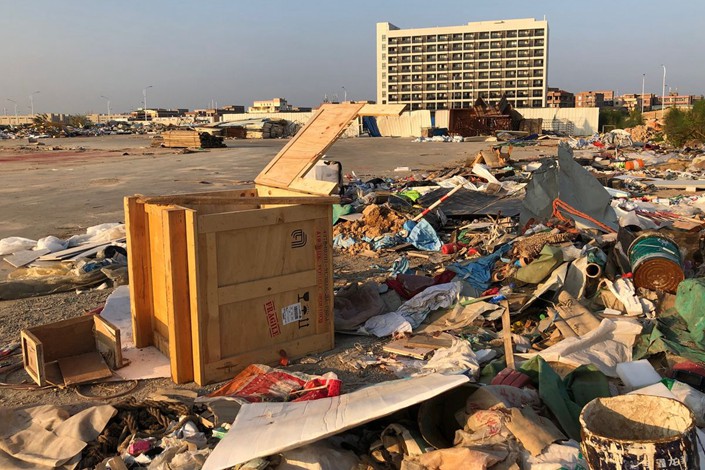 On a windy afternoon in November, a giant plot of land adjoining Jinhua’s campus — the planned location for chipmaker Jinhua’s second facility — stood vacant, not even a bulldozer in sight. Photo: Bloomberg

(Bloomberg) — For a sense of the damage Donald Trump can inflict on China with export controls, take a trip to the city of Jinjiang on the country’s southeastern coast.

That’s where Fujian Jinhua Integrated Circuit Co. Ltd. built a $6 billion plant to produce semiconductors as part of China’s goal of making the country a self-sufficient technology powerhouse. But after the U.S. president barred exports to the company, its dream is now in tatters with consultants from American suppliers gone, the factories silent and workers rattled.

Less than a month ago, Jinhua was full-speed ahead on an enormous undertaking financed by the local government that blanketed its corner of the city with bristling power plants, hulking workers’ dormitories and modern research labs. It was within months of a deadline to kick off full-scale production of some 60,000 wafers a month, a key step to giving China a competitive producer of memory chips used in smartphones.

Then the U.S. Justice Department accused it of stealing American technology, and Commerce slammed the door on purchases of the chipmaking gear it needed to hit that milestone. Expansion work halted as its American and even European suppliers skipped town. Now, uncertainty shrouds a company President Xi Jinping’s touted as one of three future domestic champions of chipmaking.

“No one here knows for sure what’s next, not even the local government officials,” one engineer told Bloomberg News on condition of anonymity. “Only Xi Jinping and Donald Trump can save us now. We only hope the government sees us as important as ZTE.”

While the Trump administration can reverse course — as it did with a similar moratorium on ZTE Corp. — the case illustrates the ease with which Washington can derail China’s efforts. That may strengthen the mainland’s resolve to build its own chip capabilities so it can — once and for all — shake off a reliance on $200 billion of annual imports.

Before the indictment, Jinhua was just getting going. In a little over two years, the company amassed a staff of about 1,000 and put together a pilot assembly line cranking out 5,000 (usable) 12-inch wafers a month, enough for millions of chips. United Microelectronics Corp. — once one of the industry’s foremost contract producers — was its research and development partner for dynamic random-access memory technology under a licensing agreement.

White-frocked engineers from ASML Holding NV and KLA-Tencor Corp. busied themselves on the workshop floor, advising their Chinese clients on the use of their equipment.

The day the U.S. announced its ban, Applied Materials Inc. staff packed up and left, according to people familiar with the matter. The American company had shipped components to Jinhua as recently as Sept. 20, according to an airway bill seen by Bloomberg. KLA-Tencor and Lam Research Corp. also recalled their engineers, the people said. Even Dutch giant ASML — whose EUV machines are the linchpin in next-generation chipmaking — pulled out within days, abandoning work on a second assembly line. The once-smooth influx of equipment ground to a halt. On a windy afternoon in November, a giant plot of land adjoining Jinhua’s campus earmarked for its second facility stood vacant, not even a bulldozer in sight.

By then, the news had spread throughout the 274,000 square meter main fabrication plant. Worried engineers huddled during breaks or in after-work gatherings, debating their future, the people familiar with the matter said. It didn’t take long for managers to fan out across the complex, reassuring workers that Beijing remained committed and they could always find non-American suppliers. But they also warned them not to comment in online forums or discuss the issue publicly, one of the people said.

So rapid was the exodus that, in many cases, Jinhua employees had no inkling of the departures till they were gone, one person said. Only a smattering of the foreign-employed engineers bothered to inform their peers before catching flights to Shanghai and Taipei, the person said. “They didn’t even give us time to say goodbye,” one person said.

The angst isn’t just confined to China, either. On Nov. 16, Applied Materials delivered a weak sales forecast in part because it had counted on Jinhua for “meaningful” sales. “In the absence of this export restriction, we would have been up sequentially in our semi systems business into Q1,” Chief Financial Officer Daniel Durn told analysts. KLA-Tencor and Lam Research didn’t respond to requests for comment. ASML spokeswoman Monique Mols declined to comment on individual customers.

From a broader perspective, the speed with which the U.S. squashed Jinhua’s ambitions underscores the extent to which China — despite well-publicized intentions of becoming a global tech superpower by 2025 — remains reliant on American innovation. Jinhua was to spearhead the transition for a country beholden to giants from Intel Corp. to Micron Technologies Inc. It’s an effort that’s become critical as the rivalry between the world’s two largest economies deepens. Indeed, it was Micron that first accused Jinhua and UMC of purloining its trade secrets, setting events in motion.

“Memory chips are cement for the entire IT industry, so China is eager to break the international monopoly and improve its own power of discourse in the world,” said Roger Sheng, an industry analyst with Gartner Research.

Jinhua was a key cog in a campaign to move away from chip imports — an influx that surpasses China’s annual spending on oil. Now that vision’s in jeopardy. To some, it seems a matter of time till the Trump administration targets the other two designated national champions: Tsinghua Unigroup’s Yangtze River Memory and Hefei Changxin, run by the government of central Anhui province.

“The majority of market watchers believe that Hefei and Fujian Jinhua — both are central to Beijing’s ambitions to develop homegrown semiconductor behemoths — will be forced out of the market,” M.S. Hwang and Dexter Lee, analysts with Samsung Securities, wrote in a research note this month. “Concerns are also growing that Hefei and Tsinghua Unigroup might be the next to be slapped with U.S. sanctions.”

Founded in February 2016, Jinhua was in some ways the most prominent of the trio — the only one that could claim a world-class chip firm as a partner in UMC. It makes no bones about its pedigree: it employs some 130 Communist Party members and those who have committed to investing include such stalwarts of the state as the Agricultural Bank of China. Fujian’s investment arm, Jinhua’s main backer, has put out more than a score of press releases over the past year extolling the project’s progress, from loans secured to its first Communist Party meeting. Unsurprisingly, China has complained to the World Trade Organization, accusing Commerce of protecting American interests and damaging Beijing’s.

To be sure, America isn’t the only problem. Jinhua is competing with Unigroup and Changxin in the same limited talent pool and that’s where Taiwan comes in.

With its location in the province of Fujian, Jinhua’s plan was to draw from nearby Taiwan’s specialists who cut their teeth working for names such as Taiwan Semiconductor Manufacturing Co. Ltd. and UMC. Jinhua at one point prepared to source a third of its staff from the island, the people familiar said. That’s why its halls are thronged with Taiwanese alumni.

Those veterans proved pivotal to instilling best practices but also training a new generation of mainland workers per Beijing’s mandate, they said. Locally, Jinhua recruiters continued to tour Chinese colleges, at one point flying thousands of kilometers to meet graduates in Harbin in the far northeast. That’s proceeding slowly in part because Jinjiang, a city of 2 million, lacks the allure of a metropolis like Shanghai despite such home-brewed success stories as Anta Sports. Both Taiwanese and mainland workers mostly spend their downtime at a local shopping mall or just chilling within their dorms until it’s time to pile onto the company bus again, the people said.

That’s despite the local government pulling out the stops to court talent. It assigned a vice-mayor to oversee Jinhua’s development and build an entire industrial park around it, encouraging suppliers and customers to move in. Taiwan’s Siliconware Precision Industries Co. Ltd. was among the first to bite and is building a packaging operation — necessary to prepare chips for sale — right across the street.

But much of the park remains barren. Jet-black asphalt roads divide plots of vacant land large enough to house stadiums. While SPIL’s facility is rising from the grassland, Jinhua’s complex dominates the landscape: its main multi-story glass-metal office building is the tallest thing for miles.

While its expansion is blocked, Jinhua is now trying to secure equipment from Japan, Korea and elsewhere, the people say. But ASML’s defection is a serious blow because it makes the photo-lithography machines essential to wafer-making. Also worrying to workers is UMC’s effort to distance itself from Jinhua. The Taiwanese company has publicly denied it was involved in any illicit activity. On Oct. 31, UMC said it has suspended research and development for Jinhua following the Trump ban.

A small number of UMC workers were sent to work with Jinhua under their research agreement and at the end of the transfer they could formally join Jinhua or stay with the Taiwanese company, UMC spokesman Richard Yu said in an email.

For now, Jinhua intends to persist with production while preparing as best it can for its second facility, the people say. Workers from SY Technology, Engineering and Construction, the country’s biggest plant builder, are refurbishing the lone plant’s innards. Workers in yellow plastic helmets and reflective vests still work on unfinished areas. NAURA, a Beijing-based equipment-maker, continues to ship products, the people say. And trucks rumble constantly around the site, ferrying the chemicals like ammonia required for testing.

Top management remains optimistic the ban will lift eventually, the people say. Much as with ZTE, they expect Beijing to intervene since so much state capital is sunk into the project. Jinhua is specifically mentioned in the 13th Five-Year Plan, the blueprint for China’s economic development. Many of Jinhua’s troops talk about how the ZTE moratorium ended after Xi made a request of Trump, one person said. As for accusations of thievery? Some scoffed at that suggestion, saying whatever technical chops they’ve accumulated came from UMC. The Taiwanese company has denied culpability as well, saying it uses a different memory-chip design than Micron.

They’re hopeful that fences can be mended. Case in point: the eight-lane avenue that fronts Jinhua’s main gate is named Lianhua Road, after UMC’s Chinese moniker.

Morale is holding up so far, the people say. That’s in part because many of Jinhua’s highest-priced talent know they can secure jobs elsewhere. On the assembly line, workers lift their spirits by blaring classical orchestral music: Beethoven’s Ode to Joy, a favorite of TSMC founder and industry pioneer Morris Chang’s, is a popular choice.