How Did Beijing-Friendly Opposition Make a Comeback in Taiwan’s Midterm Election? 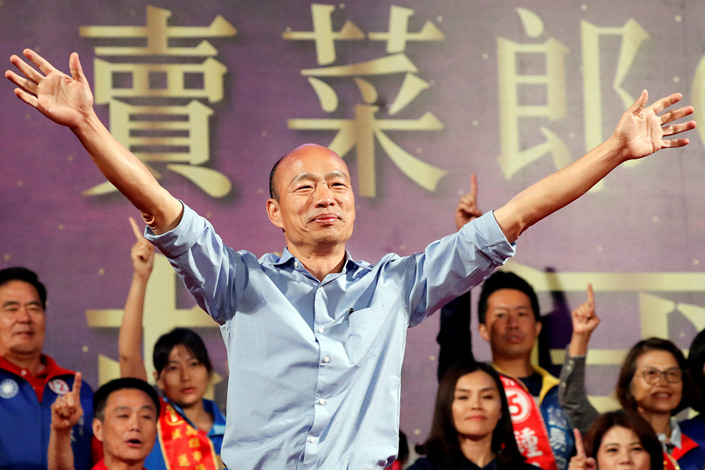 Taiwan’s midterm local elections ended with a landslide defeat of the independence-leaning ruling party and a severe blow to its top-elected official Tsai Ing-wen’s re-election prospects in two years. She resigned as party chief but will continue as Taiwan leader.

Candidates of the main opposition Nationalist Party, or Kuomintang (KMT), claimed victory in mayoral races in the key cities of Kaohsiung and Taichung as well as races for top officials in several counties traditionally seen as strongholds of the ruling Democratic Progressive Party (DPP).

The biggest blow to Tsai and the DPP came in the southern city of Kaohsiung, where the mainland-friendly KMT candidate Han Kuo-yu surprisingly trounced the DPP’s Chen Chi-mai. It made the unconventional Han, who promised to “make Kaohsiung great again,” one of the KMT’s most promising stars in the Internet era of politics.

The so called “nine-in-one” elections held over the weekend were the first island-wide elections of city mayors, township heads and county and city council members since Tsai took office in May 2016. The result is thus seen as a vote of no confidence in the Taiwan leader.

Tsai took the blame and announced her resignation as head of the DPP at a hastily called news conference in Taipei Saturday night, though she stays as Taiwan leader until 2020.

“I hereby announce my resignation as chairwoman and shoulder responsibility,” she said. “We have learned a lesson and must reflect on ourselves as, obviously, voters have a higher expectation of us.”

Taiwan’s executive head Lai Ching-te had offered to take responsibility for the party’s defeat by stepping down, but Tsai rejected his resignation.

At a news conference Monday, Lai said he decided to remain as premier to help advance the government’s policies.

“The election results showed that many people in Taiwan are unhappy with the government’s performance,” Laid said. “But the country needs continuity of government policy, so I will stay on to ensure political stability.”

Han Kuo-yu, 61, is a politician-turned businessman. After an eight-year stint as a legislator in the 1990s, he ran a bilingual school in Yunlin county. In 2012, he was appointed by the Taipei municipal government as general manager of government-funded Taipei Agriculture Products Marketing Corp., foreshadowing his return to the public sector.

In 2014, after Ko Wen-je was elected mayor of Taipei, the new major retained Han as general manager, giving him the opportunity to make intense rhetorical attacks on DPP council members through social media. Ko, an independent candidate, also won re-election by a small margin over the weekend.

Han often calls himself a “bold-headed vegetable vendor.” He won support from local farmers and fishermen. That put him in contrast with other KMT candidates who have eminent political or academic backgrounds but are out of touch with grassroots voters.

In 2017, Han resigned from the agriculture company to run for the KMT chairmanship. He lost to Wu Den-yih by large margin but gained island-wide recognition.

After that defeat, Han was appointed director of the KMT chapter in Kaohsiung. That set the stage for his run for mayor, though he was initially seen a certain loser.

When nominated in May to run for mayor, Han received no money or resources from the KMT. But he pursued an underdog strategy, pledging to campaign with just “a bottle of water” even if the party could support him with only “one bowl of rice.”

Kaohsiung incumbent DPP Mayor Chen Chu was re-elected in 2014 with an overwhelming 68%. That margin made Kaohsiung look like an almost certain lost battlefield for the KMT.

One factor that helped Han was the DPP’s factional splits in the primaries. His opponent, Chen Chi-mai, eventually won the party nomination but wasn’t considered the ideal candidate by many, including Mayor Chen Chu.

During the two decades the DPP ruled Kaohsiung, the port city has struggled with industrial transformation. With Taiwan’s slowdown in growth, Kaohsiung port’s rankings in regional and global freight shipping volume declined.

In the past 20 years, Kaohsiung has seen a continuous outflow of young population and stagnant wage growth. It was once the second-most populous city in Taiwan, but recently lost that title to Taichung.

In his campaign, Han bluntly charged that Kaohsiung has turned “poor and old,” overturning the “happy city” image the ruling DPP government has long tried to build. His “make Kaohsiung great again” promise won the support of people disappointed with the economy under the DPP government.

Although Han did not directly comment much on mainland-Taiwan relations during the election, he emphasized plans to enhance exchanges between Kaohsiung and mainland cities such as Shanghai and Xiamen, as well as Singapore and South Korea’s capital Seoul. The comments have been seen as indirect criticism of current tensions between Beijing and Taipei under Tsai’s administration.

In his victory speech, Han said he didn’t feel “the slightest joy” after the victory, because he needs to “roll up my sleeves” and start working.