Caixin Explains: Why Some Fear China’s Private Sector Is Retreating 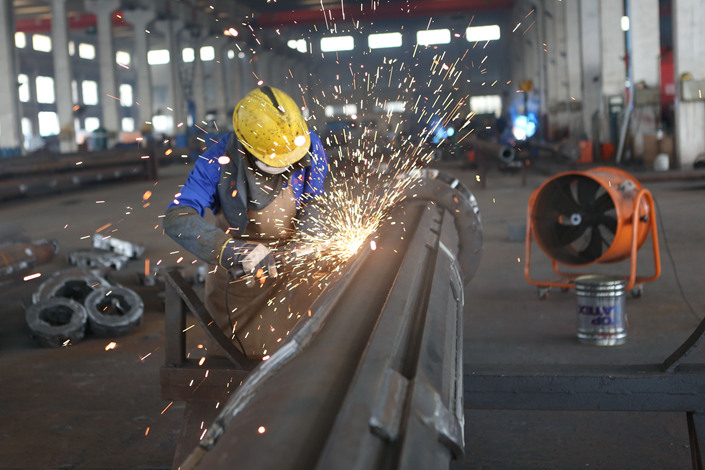 China’s top policymakers have recently vowed unwavering support for the country’s private sector. Why did they need to? In part, because of a specter stalking China this autumn — that, as economic growth slows, beleaguered private firms could be replaced or taken over by the state, reversing decades of reform. This specter’s name is “国进民退” (guó jìn mín tuì) — literally, the state advances and the private sector retreats.

China’s government needs the private sector now more than ever. As officials often repeat, it accounts for half of the country’s tax revenue, 60% of gross domestic product (GDP) and 80% of urban employment. In the 1980s, some reformers called China a “bird-cage economy” — meaning that the private sector was like a bird that was given just enough freedom to fly within the cage of state planning. However, this bird has long since outgrown its cage — and it doesn’t look like it will squeeze back in.

Private sector anxiety is rooted in decades of unequal treatment. State-owned enterprises (SOEs) enjoy easier access to loans and markets, and receive more protection from local governments. This year, private firms have been hit by a triple whammy of a looming trade war, a stock market rout and a credit crunch. A sweeping campaign to cut down on financial risks has eviscerated China’s shadow banking industry, which once supplied private firms with the credit that banks were unwilling to offer. Pressured by the same campaign, banks are now even more reluctant to start taking on bad debt. And many private firms lack collateral or are simply not good investments.

Faced with collapse, some companies could be voluntarily running toward state-owned sanctuary. As the stock market slid, many major shareholders that pledged a large portion of their holdings as collateral for loans are now selling their stakes to the state sector, including local governments, to raise funds. Entrepreneurs may be trying to “find shelter” to save their businesses, said one government think tank director, trying to explain a wave of takeovers by SOEs this year.

SOEs are weathering this year’s harsh economy far better than the private sector. A flurry of policies have emerged in the last two months to address this imbalance, including bailout funds, lower lending rates, tax breaks, expanded market access, and promises of better legal protection. But despite these efforts, with business activity slowing and higher trade war tariffs likely to come into force in January, many enterprises are still on edge. Companies need profitable business and investment opportunities, not capital, several businessmen have told Caixin.

Fears of “国进民退” last surged 10 years ago during the 2008 financial crisis, when the Chinese government unleashed a 4 trillion yuan ($576.47 billion) stimulus package. Most was used to prop up SOEs, while letting private enterprises fall by the wayside. The return of this decade-old concern is a sign that entrepreneurs’ suspicions of the state have certainly not gone away.