By Zhang Qizhi and Ke Baili 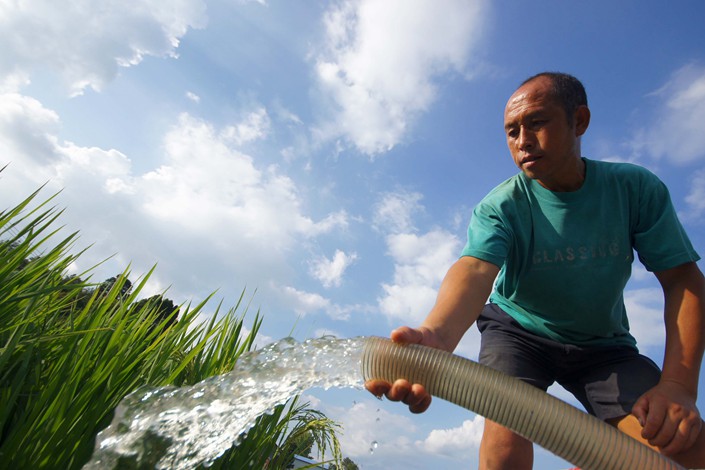 Late in 2008, in the middle of the global financial crisis, China decided to unleash a 4 trillion yuan ($586 billion) wave of stimulus, mainly through infrastructure investment. After plummeting in 2008, China’s economic growth rate only slipped slightly in 2009 and accelerated in 2010 (see chart below).

But this rush of extra liquidity, largely provided via bank loans, left stagnant puddles in its wake as corporate debts swelled and financial risks proliferated. Ten years later, the current crackdown on excessive leverage, overcapacity and shadow banking is still in part trying to deal with its lingering after-effects.

China’s leadership, fond of agricultural metaphors, have called such massive stimulus “flood irrigation” (大水漫灌 dà shuǐ màn guàn), an ancient and inefficient method of irrigating crops by simply releasing water over the ground’s surface. Water can pool where it is not needed, and much is just lost via evaporation.

China now has severe overcapacity in polluting heavy industries, highly indebted local governments and enterprises, and a financial sector brimming with opaque and risky business practices. The 2008-09 stimulus certainly didn’t cause these problems on its own — political pressure to hit growth targets, soft budget constraints and lax regulation all played their part — but its effects probably did make them all worse.

Premier Li Keqiang and other officials say China will not use such methods again. Instead, they say, the country will rely on more finely tuned “drip” and “sprinkler” irrigation to increase the supply of credit. For example, “targeted” releases of liquidity, like the latest cut to banks’ reserve requirement ratios, are, in theory, supposed to get credit directly to where it’s really needed — like small firms in the private sector. So far, such firms are still struggling to access financing.

China’s latest quarterly growth figures, for July to September 2018, were the weakest since the first quarter of 2009. Although officials continue to stress that their tactics are different now, the suspicion remains that the government might just release the floodwaters again. After all, it worked last time.

Contact reporter Zhang Qizhi (qizhizhang@caixin.com)
Share now and your friends will read it for free!
Share this article
Open WeChat and scan the QR code
RELATED
MOST POPULAR
GALLERY
SPONSORED