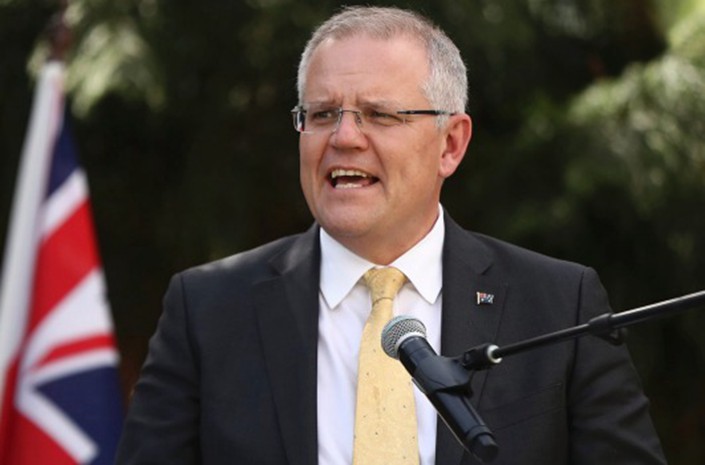 (AFR) — Austrialian Prime Minister Scott Morrison has implored China and the U.S. to use this weekend’s G-20 leaders’ summit in Buenos Aires to end their trade war, saying the dispute is now posing a real threat to the global economy.

Morrison left behind his own troubled government and flew to the Argentine capital last night for the two-day summit that he and other world leaders believe is the most critical G-20 since the global financial crisis a decade ago.

Morrison has so far failed to get a meeting with U.S. President Donald Trump and Chinese President Xi Jinping. But he plans to use informal talks and whatever other avenues are available while in Buenos Aires to do what he can to help avoid a stampede toward protectionism.

“This G-20 will be a critically important meeting — it is about the two biggest economies addressing their differences to provide certainty and stability to the global economy,” he said prior to departure. “We need them to agree a constructive way forward on global trade. We cannot pretend that ongoing trade tensions do not pose real threats to the global economy.”

He did not rule out a meeting with Trump.

Global markets are also rattled at the prospect of the impasse remaining unresolved, more so after the U.S. and China fell out over trade-related issues at the recent APEC summit, and, for the first time, no joint communique was released.

Speaking ahead of the G20, one senior official said the Trump-Xi focus was “the only game in town” at the summit on Friday and Saturday in Buenos Aires. Trump and Xi will have dinner on Saturday night.

Immediately at stake are plans by Trump to increase from 10% to 25% existing tariffs on $250 billion of Chinese goods on Jan. 1.

He is also threatening new tariffs on another $267 billion in Chinese goods.

If the pair agree at the G-20 to hold talks to resolve the dispute then it is expected both of these impositions will be put on hold.

Trump used a similar bargaining tactic against the European Union. The actions against China are motivated by unfair trade practices by Beijing.

“There’s a good possibility that we can make a deal, and he is open to it,” Kudlow said.

But, at the same time, he cautioned the U.S. was prepared to forge ahead with the new tariffs in the belief China would fold first.

He said the goods that would be affected represented only “a fraction of our economy” and that the U.S. was in “better shape to weather this than the Chinese are.”

Morrison has been previously sympathetic to the U.S. tactics, saying at the recent ASEAN summit in Singapore that he supported the aim of what Trump was trying to achieve — fair and free trade — and therefore did not necessarily regard the tariffs as protectionism per se.

“The U.S.’ grievances about IP (intellectual property) issues have been around for a long time; they’ve been raised by different administrations and this one is obviously taking a very different approach,” he said at the time.

On Thursday, Morrison expressed hope that the realization by both powers of the damage they would do to their economies if they escalated the trade war would lead to a breakthrough.

“My key message at the G-20 will be that to enjoy the prosperity, security and connectedness we have today, we must protect the international system,” he said. “That system is built on rules and openness.”

“Australians have always prospered from this approach. I believe both of the major economies — the U.S. and China — ultimately share this goal, and that should help focus the discussion at the G-20.”

International Monetary Fund boss Christine Lagarde this week added her voice to those of world leaders. “We have had a good stretch of solid growth by historical standards, but now we are facing a period where significant risks are materializing and darker clouds are looming,” she said.

“Rising trade barriers are ultimately self-defeating for all involved. Thus, it is imperative that all countries steer clear of new trade barriers, while reversing recent tariffs.”

When attending the G-20 meeting of finance ministers in Argentina in July when he was treasurer, Morrison said China must share some of the blame for the trade war because of its unfair practices.

He said while he disagreed with the U.S. actions, they were in response to “legitimate issues” such as China’s intellectual property theft, which the U.S. costs it an estimated $600 billion a year.

“There has to be a recognition that these things haven’t happened in isolation,” Morrison told The Australian Financial Review.

“There’s some legitimate issues that have been raised by the U.S. and those things can’t be dismissed simply because of the nature of the way these issue are unfolding.”