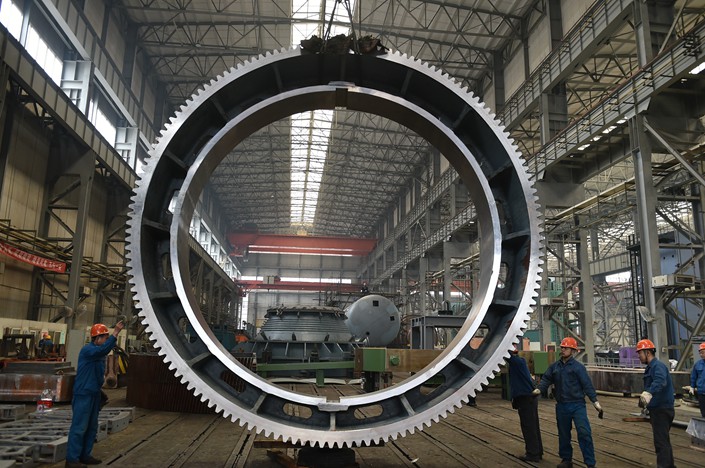 Prior to economic reforms in the late 1970s, the ownership structure of the Chinese economy was quite simple. Across the country, there were two kinds of public ownership. In the countryside, it was “collective ownership,” and in the cities it was “state ownership.”

At the time, the urban economy accounted for 60% to 65% of GDP and 30% of total employment. State-owned enterprises (SOEs) were “enterprises” in name only, and in fact just an extension and subsidiary of the Communist Party of China (CPC) and government apparatus. From today’s standpoint, the entire state-owned economy was equivalent to one mega-company, with SOEs being the company’s production department, and the government’s financial departments and the banks responsible for raising and allocating funds.

How to reform such a system? There were two theories. The first one held that the institutional framework of state ownership — and its dominance in the economy — could not be changed because the issue of ownership has a direct bearing on China’s socialist system and the ruling party. If reforms were necessary, they could only be adjustments and improvements within the established institutional framework, according to this theory.

From the early days after the founding of the People’s Republic of China in 1949 until the end of the 1980s, it is fair to say that China had been experimenting with the first theory.

It was not until Deng Xiaoping’s famous southern tour in the early 1990s that China set out on a journey of “institutional innovation”; namely, reforming the institutional framework around state ownership to make it fit into a market economy, but at the same time not giving up on state ownership. There was no demolishing and building anew.

This path chosen by China has three core elements. First, the reform aims to establish a market economy. Second, to reform state ownership according to the requirements of a market economy, transforming SOEs into real businesses that operate in the market so that they can “actively participate in market competition, grow and develop themselves in market competition,” to quote the decision of the Third Plenum of the 14th CPC National Congress, in November 1993. More specifically, it tries to keep the state in the shareholder role of SOEs. Third, allow the development of private companies, where the state guarantees to “create conditions, for companies of all kinds of ownership structures, for their equal participation in the market competitions, and treat all types of companies equally,” according to the 1993 decision.

Looking back today, although there were many unsatisfactory aspects of the reform of state-owned enterprises, this road chosen by China in the 1990s was a success. The reason is simple: Following this path, China, despite starting with an economy commanded by SOEs, achieved sustained and rapid growth for decades.

That is probably due to two reasons. First, the private sector has been fully developed; second, the performance of the SOEs has also improved substantially. Based on my understanding of SOEs reforms in other countries, it is difficult to find a case that is more successful than China’s.

However, the success also brought a problem. China’s path was not a comprehensive and rapid privatization path, as recommended by the Washington Consensus; and great economic success has been achieved although reforms are only halfway achieved. That gave rise to an understanding that could be summarized as Chinese exceptionalism.

This understanding, which looks plausible but actually is incorrect, held that China succeeded because it did not adopt the Western model. Rather, the argument goes, China’s success is because of its invention of a Chinese model that is completely different from the Western one.

From this understanding, three views — all with implications for future policies — have been derived.

Second, given that the Chinese model is completely different from the Western model, if China is allowed to continue to expand its influence in the global market, it will inevitably pose a threat to the current international order. Therefore, it is necessary to take countermeasures against China as soon as possible.

My observation is that the first two views, particularly the second, are quite popular in the West. Within China, however, the third view is gaining traction and having more and more influence on China’s reforms.

The Chinese exceptionalism argument sounds plausible but is actually wrong, because it’s based on a superficial, shallow understanding of facts while missing the truth.

It’s true that China has not followed the road recommended by the Washington Consensus and instead created its own path. But the ownership structure in the economy has undergone fundamental changes.

Forty years ago, private ownership was zero. Today, non-foreign private companies contributed more than 60% of China’s GDP. If private farmers and foreign-invested companies are also counted, the economic output from private ownership reaches about 70% of GDP. They also account for 90% of job creation nowadays.

When comparing these facts to other economies, there is actually nothing unusual about the path China has taken — it is also about introducing private ownership, the foundation of a market economy.

More precisely, despite their current differences, China’s path and the Western model point in the same direction.

It is also true that China has, within its economy, retained significant state-owned components, which is unique in the world. However, China needs to take two fundamental facts into consideration. First, along with 40 years of rapid growth, the state-owned share of the economy has been continuously shrinking rather than growing. Second, China did not stick with its traditional SOEs; rather, it has pursued continuous reforms of SOEs to make them suitable for the market economy.

How China achieved economic success is history. Today, we should analyze it to work out the best path to future success. China’s choice of reform other than abandoning state ownership was a result of its own conditions, and that choice meant China faces a challenging road forward, as there are inherent contradictions between state ownership and a market economy.

These contradictions are reflected in at least three aspects.

First, when the state exercises its supervisory and social management functions, if it cannot maintain “competitive neutrality” or cannot guarantee that its actions won’t bring any undue competitive advantages to market participants — especially SOEs — fair competition won’t be possible.

Second, the state is the owner of state-owned capital. If it can’t follow market principles to pursue market-level returns on capital, its equity investment in SOEs becomes a de facto subsidy, undermining the fairness of market competition.

Third, a large number of financial and nonfinancial SOEs share an owner — the state. If these SOEs are not completely independent of each other, it is difficult to have real market competition. If their behavior is similar to the behavior of the subsidiaries under the same actual controller, then the entire state-owned economy will be similar to a “China Inc.” with an equity capital of up to 66.5 trillion yuan ($9.56 trillion). With such a mega-company participating in market transactions, competition will inevitably be distorted.

After 40 years of reform, although state ownership and the market economy have achieved a considerable degree of integration, there are still unresolved contradictions in the three aspects above. That’s the root cause of the challenges facing China’s reforms in both domestic and international markets today.

What to do next? If we follow the Chinese exceptionalism theory, it would mean putting Chinese characteristics ahead of the Western model and discontinuing reform. The market mechanism in China would be distorted to suit state ownership, strengthening existing factors that run counter to the principles of the market economy.

That path — and naming it “reform”, saying it’s the Chinese model of a market economy — is a dead end, in my opinion.

It’s in effect a “reverse reform” that integrates the Communist Party, the state, the financial institutions and companies — all under state ownership — into a mega “China Inc.”

At present, many domestic and international market participants are in wait-and-see mode, and are currently still willing to do business with China Inc. But as soon as they see through everything, become disillusioned and are unwilling to play the game, their interest will evaporate. The result: private companies shrinking in the domestic market, and China disengaging from global innovation. China will again fall behind other countries in the world.

So should China abandon state ownership completely? That is, in my understanding, one of the most significant expectations of Western mainstream thinking toward China’s future reforms. However, I do not think this would be a good strategy either.

There are several reasons behind my thoughts.

First of all, given China’s current public governance, getting rid of state ownership once and for all carries the risk that state-owned capital will fall unfairly into the hands of well-connected individuals. It would be a feast for them. Also, even if a mechanism could be established to guarantee fair privatization of state-owned capital, the scale — more than 60 trillion yuan — is too huge to be practical. The returns from privatization would have to be reinvested somewhere else.

Second, state-owned capital has its own advantages. Its risk resistance is stronger than private capital, making state-owned capital uniquely positioned to contribute to innovation. Also, if technological revolutions in the future considerably widen society’s income gap, state-owned capital could play an important role in narrowing it. China should learn lessons from the United States and take precautionary measures to prevent wealth from falling inappropriately into the hands of just a small number of high-income people.

To sum up: The path China can and should take today is still the road it chose in the early 1990s, which is to continue to reform state ownership in line with the requirements of a market economy.

This path is both easy and difficult because the state itself retains the initiative and control. The key is determination. As long as the state is determined to change its behavior, a lot of progress can be made in future reforms.

Zhang Chunlin is lead private sector development specialist at the World Bank Group’s Trade and Competitiveness Global Practice. This article is a translation of his Chinese-language speech at the recent 9th Caixin Summit.